Map Africa 2009 conference and exhibition was organised jointly by GIS Development and Department of Rural Development and Land Reform at Birchwood Hotel and O R Tambo Conference Center, Johannesburg. The three – day event received an overwhelming response from different geographies, with about 370 participants from across the world. Map Africa 2009 successfully achieved its motto of leveraging the geospatial profile making a pronounced presence in the African continent.

NMO – INDUSTRY EXCHANGE FORUM
In its pre-conference agenda, there was a NMO-industry exchange forum where the industry representatives had a brainstorming session with an elite group of national mapping organisations belonging to the African continent. The forum provided a platform to the NMOs where they shared their mandate, vision, future plans, challenges and explored the possibility of public-private partnerships with the industry.

Clear and Written Specification:
During the discussion the need for clear and written specifications was stressed when venturing for partnerships. “At times NMOs who take the decision may not be abreast of technology and so there is a need to identify one who has sound knowledge in the area for writing the specification,” said Edwin Guvaza. In such a situation there is need for both the parties to bring more clarity by writing down the specifications. Simultaneously, the principal organisations should be in a position to provide better guidance and control to the user organisations.

Sustainability of Large Scale Mapping:
Most of the countries in Africa are yet to be mapped and hence, the need for mapping. Discussions were held on how/what private sector can recommend on sustainability of large scale mapping of the region. A model was proposed wherein a company and a mapping organisation invest together for mapping a region and the organisation which invests an exclusive right to sell the data for solution to non-traditional users like transport, power etc.

Raise the Profile of Industry:
There is a need to raise the profile of the geospatial industry within the government and this responsibility lies with the NMOs. Various surveying generals have talked about marketing strategy of geo info on how to raise the profile of geospatial industry in development agencies and how they can work to bring it to attention of the key decision makers and take the technology to the masses.

Acquisition processes:
The forum stressed the need for producing large scale maps. Discussions were held on creating geodetic network and GNSS infrastructure in these countries where there is the possibility of PPP approach.Other points of discussion included security of resources, data and national security at large, need for building the capacity and having a comprehensive geographical information policy. 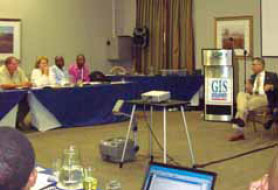 TRAINING ON GIS
A day long orientation programme on GIS was conducted for the officers from various municipalities of SA. Dr M K Munshi, Dean GIS Institute, GIS Development Pvt. Ltd., conducted an informative training by taking the participants on a journey of GIS right from the fundamentals and definitions of geospatial technology to latest technologies and implementation work flow. Besides, the training also had industry presentations by Trimble Systems Southern Africa, Intergraph and Data World. The industry showcased latest technologies and portrayed significant geospatial applications pertaining to municipalities. This module helped in developing a conceptual understanding of GIS and related technologies and also developed an understanding of how they can be successfully implemented by municipalities as a decision support system and analytical tool.

Inaugural Session
The inaugural session, with high profile participation from Council of Scientific and Industrial Research, Department Of Rural Development and Land Reform and Indian High Commission, SA, set the tone of the event.

Sanjay Kumar, CEO, GIS Development Pvt. Ltd. while welcoming the delegates emphasised the fact that we need to educate, create awareness and bring the attention of decision makers so that they realise the importance of GIT in planning, implementation and monitoring aspects of projects. Shambhu S Kumaran, Deputy High Commissioner, High Commission of India talked of Indian perspective on Indo- African knowledge sharing wherein geospatial technlogy could be a component along with education and health.

Dr Bob Scholes, Research Group Leader, Council of Scientific and Industrial Research, SA, gave a brief on the position of SA and the Department of Science and Technology with respect to geospatial technologies. Thomas Thozamile Gwanya, Director-General, Department Of Rural Development and Land Reform, SA, inaugurated the conference. He talked about the 10 priorities of the government – one of them linked to rural development, land and agrarian reforms and food security. He opined that spatial planning is essential in land reforms, agricultural productivity and rural livelihood and revitalisation of rural towns. He said it is unfortunate that many government agencies do not recognise the role of geospatial technologies in developmental processes, as a result there is little political support for collection, maintenance, dissemination and use of geospatial information.

Plenary Sessions
Considering the needs and demands of the African geospatial market along with the expectations of the people investing in geospatial domain, Map Africa 09 hosted three informative plenary sessions. The first plenary with its focus on technology developments and trends started with the opening presentation by Michael Jones, Technology Advocate, Google Earth. He made the first and a lasting impression with his informative presentation which dealt with the latest technologies which Google Earth is focussing on. Another interesting presentation by Arthur Taylor, Regional Manager for Africa, Trimble, on current and future system of GNSS and its applications updated the audience with the new technology of global navigation satellite system, its advantages of bringing robustness, reliability which people could have only dreamed about several decades ago. Dr. Thibedi Ramontja, CEO, Council for Geoscience, SA, presented an overview of the recent developments in various applications in Geosciences. Through his presentation, Prof. Dr. Sc. Juha Hyyppä, HOD, Department of Remote Sensing and Photogrammetry, Finnish Geodetic Institute, Finland, highlighted the remote sensing and laser scanning possibilities for Africa.

The second plenary started with talk by Ashwell Jenekar, DDG, Statistical Support and Informatics, Statistics South Africa. He focussed on the primary purpose in the development of a dwelling frame for Statistics SA Maher Khoury, Sales Director, DigitalGlobe, gave an idea on how satellite imagery can be a big asset for oil and gas industries and quoted examples of how they are serving PEMEX with the same. Dr Michael O Sutcliffe, City Manager, eThekwini Metropolitan Municipality, SA, advocated GIS technology as a decision making tool. John M Sasser, President, Rolta Middle East & Africa, talked about convergence of technologies by quoting examples.

Geospatial Policy and Guideline, the third plenary session covered the complex topic in a comprehensive manner with four speakers who are experts in their respective fields. Dr Derek Clarke gave a view on national mapping policy for a developmental state in Africa. By introducing the modern concept of 4C, Udit Chauhan, Director, Data World, SA discussed his own idea of suitable policies and guidelines pertaining to geospatial domain. Aida Opoku- Mensah, Director, ICTs and S&T Division, UN Economic Commission for Africa, highlighted the African regional SDI along with current status and challenges. Dr MK Munshi advocated the relevance of standards and interoperabilty. During the valedictory Dr Derek Clarke wrapped up the conference in a very unique way by sharing the honest feedbacks of the participants. He endorsed Map Africa 2009 as the best conference so far. The conference witnessed 23 exhibitors who showcased their latest technology and innovations which proved to be a splendid effort in leveraging the geospatial user domain. The conference provided ample networking opportunities for people to share their expertise.