Location is increasingly making to the centrestage. One can take a sneak peek at trends the way LBS applications are emerging by going through the winners at various competitions being organised. We take a look at few participants of the following contests

The Navteq Global LBS challenge is organised in Americas; Europe, the Middle East and Africa (EMEA) and this year Navteq has introduced a challenge for Asia Pacific. And the 2008 Global LBS Challenge features a global prize pool valued at almost $4.5 million in cash and prizes.

The EMEA challenge
The Global LBS Challenge Awards Ceremony for the EMEA region was held during the 3GSM Conference, Barcelona, Spain, February 12, 2008 at Poble Espanyol de Montjuic. Out of the12 applicationts – Navteq announced 3 runner up prizes and a grand prize.

cometogethr is a location-based social networking application that lets user join and create groups of people with mutual interests, view their location on the map, contact or meet them and share content. The system consists of a GPSenabled mobile phone or a mobile phone with an external Bluetooth GPS receiver, an installed cometogethr application, a website with a map client and backend servers.

This application allows user to interact with people through groups depending on the interests, create locations of interest, attach photos/videos to the location, share the locations etc.

GyPSii is a geo-location and social networking platform and service for mobile, web and set-top box devices. GyPSii is a UGC (User generated-content), social networking, search and locationbased suite of integrated mobile and web solutions for users to share, view and upload pictures, video, text and POI (points of interest) with a geo-tag (location data) place and track each other in their select communities. The main features of this application are its User Generated Co tent (UGC), Real Time Friend Finder, Mobile Proximity Search of UGC and Maps & Navigation that is the heart of the application. www.gypsii.com

Senda is a provider of travel-time management information services dedicated to companies in a variety of industries including media, transport, warless and the web. Chronomove is an always-on travel- time management solution that lets commuters: choose their Estimated Time of Arrival (ETA) and traffic events, and communicate their ETA to persons awaiting their arrival.

Category: Social Networking UbiSafe is a location based service for personal security, contact locating and emergency needs. UbiSafe is targeted to the consumers’ market. It can be used for monitoring elder or invalid persons in need of attendance, for personal safety (at night, in walking risk zones, etc.) or for children security.

Families can use their own cell phone to: verify and track family members’ positions on map, Fig. 1: APP TRENDS

Location aware APPLICATIONS According to ABI Research, user generated content will become a key component of LBS as it permits companies to enhance their services with real-time information in a cost effective way…and Initiatives like GyPSii may reach the status of the existing social apps like Facebook and MySpace.

send/receive emergency messages, set up personalised “safe” zones (geo-fencing) and related notification rules, create a “virtual leash” for preventing children to move out of sight and be warned about teens’ speed-limits breaks.

You hike to the top of a mountain or pull over at a scenic overlook. You see mountains in the distance.

HeyWhatsThat will tell you what you’re looking at, providing a 360 panaromic sketch labelled with the names of those peaks on your mobile phone from just about anywhere in the world. HeyWhatsThat technology takes a location and delivers mountain names, elevation profiles, contours, viewsheds and even views of the night sky.

You can access it with web browsers and desktop applications and via email and mobile phones. There is also a version for the Google Android platform, and an API (Application Programming Interface) for low-volume noncommercial use.

The WildLab enables citizen scientists, like birdwatchers, to collect real-time scientific information on their mobile devices. Users enter “HotSpots” from which they make observations containing location, time and the species sighted. The WildLab uses Where & Navteq maps to provide and collect POI (points of interest) information. Out of all wildlife-watching activities, birding dominates: in a 2006 study, the U.S. Fish and Wildlife Service (USFWS) estimated that nearly 50 million people participated in some birdwatching activity during the year in the U.S. alone.

‘Social Blogging with Latitude!’ is the idead behind SpotJots. It is dedicated to help users in telling their stories, and it does so in such a way that lets one discover, and be discovered, through location. This application allows the users to place stories and enrich them with photos, video or audio – anywhere in the world. Jot experiences as they happen using mobile, and your subscribers will be updated instantly via the web, RSS, or text message alerts.

Since 2003, many applications have been submitted for the Challenge. There has been a trend associated with the categories. Figure 1depicts a broad trend. While talking about the future of Mobile/LBS, a Navteq official commented “Mobile space is the future and there is an opportunity galore that awaits geo-technology companies, programmers and developers. And Navteq investing in to this challenge through the support from its Navteq Network 4 Developers (NN4D) partners, shows that Location is the next big thing in terms of consumer applications and its worth keeping a note on this.

The site offers additional resources like webinars and added advantage through its partners and their networks. Other offerings include numerous supports to developers like Technical FAQ, Discussion forums, Knowledge base, Trouble Ticketing System (for oneon- one assistance for developers) and Map Reporter process (to report potential issues with Navteq map data). 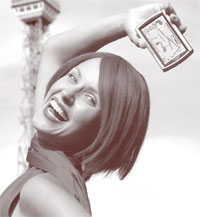 iPointer
iPointer is from Intelligent Spatial Technologies (iST), developers of patented location-based services and technologies that allow users to “point” their cell phones and receive information about selected buildings, landmarks, and POIs; iPointer is a mobile search and content delivery platform that allows mobile users to access an unparalleled array of location-based services and content. Pointing Based Search generally refers to a search technique that allows a user to input spatial data to a computer by using a pointing device to identify an object of interest and then receive information related to that object.

To perform pointing based search with the iPointer, the user first activates an iPointer Client application on a cell phone or PDA. Once the application is running, the user simply points the handset at a landmark, building, or POI, and clicks a selector button. The iPointer Client then builds its search criteria with input from a GPS receiver (position) and a digital magnetic Compass (orientation) and sends it to the iPointer Server. The GPS and compass can either be on board the handset or made available as an accessory device connected via Bluetooth technology. www.i-spatialtech.com/ipointer.htm

RayGun
Planet 9 Studios has developed RayGun, the 3D navigation, friend finding and social networking application, enabling users to share their mobile position, see their friends as 3D avatars and communicate with them via SMS or VOIP. The application combines these social networking features with GPS. The application runs on cell phones, personal navigation devices, in-car navigation systems, and PCs. There is also a 2D version that runs on Google Earth and on Google Maps.

Smarter Agent
Smarter Agent, a location-triggered real estate search is a service that combines mobile location technology, such as GPS, with information about real estate, neighborhoods and interesting places around a given location.

The contest is organised by Where, provider of GPS widgets that enable customisation of mobile phone.

SkyMap
This innovative application uses GPS-enabled mobile devices to display the current sky at the user’s current location. Skymap is a project of Mediated Spaces, Inc., an interactive design studio based in New York.

Mapicurious
Mapicurious allows users to create their own maps with interesting points nearby and share them with others.

Voicemap.mobi
It is a mobile and web based system for leaving voice notes tied to a particular location. Users can record private or public location voice notes on their cell phone then listen to them on the web and/or publish them on twitter.

Two interesting applications that appeared in news recently have come from computer science students of Massachusetts Institute of Technology (MIT).

One project named GeoLife gives users a way to set to-do lists and get reminders on their phones. Walk by the market, and the device might buzz with a message that you’re supposed to pick up milk. Another effort, named Flare, was designed to help small businesses like pizza shops cheaply track their drivers.

Then there was Locale, which lets users configure their phones to automatically adjust their settings when the devices detect themselves in certain zones. So you might set your phone to automatically go into vibrate mode in the office and silent mode at the movie theater, and ring everywhere else.

Whether it is an institution as MIT or individual developers who want to showcase their talents and efforts in a challenge that is financially rewarding, the goal is same – Location. The future indicators may well be seen in the words contained in the above-mentioned news – “For these students at least, cell phones should be all about location, location, location”.