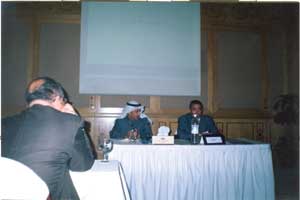 The Kuwait 1st International Conference on Geographic Information Systems was held in Kuwait City from February 5 to 7 at Crowne Plaza Hotel. Propelled by speakers drawn from all over the world and covering a diversity of GIS topics relevant to the Middle East, the event was organized by the Consultation Unit for GIS and Remote Sensing, Kuwait University and ProMedia International. It was attended by more than 70 delegates. The conference had the objective to increase awareness about use of GIS in the public, private and the NGO sector in the Gulf Cooperation Council (GCC) countries and to facilitate interaction amongst experts and senior decision makers in the GCC. An important highlight of the conference was the exhibition, which was participated by companies like Intergraph, ESRI, National Computer Services Ltd, CyberMAK, OpenWare, STAR Middle East, Digital Globe, MAPS geosystems, Geo-Nadir, MapInfo, AeroMap, Geographic Technology Trading, Almisehal Geosystems.

Speaking on the occasion Prof. Nader Al-Jallal, President of Kuwait University and Chairman of the National GIS Steering Committee of Kuwait said, “GIS technology has become a vital civil aspect especially since all development projects rely on various databases from different sources. The technology assists in decision making.” He added, “Kuwait University is keen on establishing a National GIS Center which will serve both governmental and private sectors in Kuwait. As a result the National Center Project was created. After the approval of Kuwait University we are currently in the process of getting it approved by the Cabinet Ministry. It is hoped that the project will be approved soon.”

Dr. Nabhan Al-Nabhan, Chairman of the Kuwaiti GIS-ESRI User’s Group, in his speech said, “the conference is indeed a clear sign of the University’s concern and interest in GIS technology, which is becoming a necessity in all different services and civil activities”. He informed the gathering that the event coincided with the National and Liberation days of Kuwait. Both occasions meant a great deal since Kuwait got its independence in the same month, and became an active country in the global community”.

The keynote lectures covered the following topics: National GIS Center in Ireland; How to Build National Map Database in the Municipality of Kuwait in Cooperation with Experts from Germany; How the GIS Center in Dubai Municipality was Established; Experiments of international companies in GIS applications such as applying GIS in oil discoveries by ESRI; and future vision of GIS from perspective of Intergraph.

He also spoke about applicability of GIS to Dubai Government needs, steps for implementation of establishing a GIS center, standards, and examples on online integration of GIS data and services. Finally he concluded his paper with the important aspects that have been covered by the GIS Center in Dubai Municipality.

The Organizing Committee of the conference received 114 papers from 27 countries. In addition there were papers on GIS and papers on present experiments of some Gulf States in the field of establishing national GIS centers such as the Sultanate of Oman, Kingdom of Saudi Arabia and the State of Kuwait. There were 14 sessions during the three days. A major attraction of the event was the city tour and a visit to the scientific center.