Recent years have seen an increasing interest in the open source movement as a new paradigm for software development. Open Source Software (OSS) have been hailed as a substitute for proprietary software and greeted with great fanfare in a variety of forums (Internet-1). Unlike the traditional proprietary paradigm of software development, users have free access to the source code in open source environment which can be modified to correct software bugs, port the software to new hardware platforms or simply use it for free. In a proprietary market, the closed source codes are providing needs of the users, industries, organisations such that programmers can use various methods built in the software, however, the working of these methods remain hidden.

The proprietary software are sometimes too costly for small organisations to run their business in cost effective manner. Further, proprietary software have other problems like code reviews which is done by few programmers of that software firm. Fortunately, the open source market is there and lots of software are present to compete these proprietary software in the field of GIS (Nasr, 2007). Camara (2004) emphasised that OSS projects can offer rich functionality, robustness, cooperation from contributing developers and continuous improvement. Thus, the development of free and open source software has experienced a boost over the last few years.

ROLE OF OPEN SOURCE GIS
Barr (2005) discussed the difference between open source and proprietary software in a way that critiques the philosophy of closed source software development. It is argued that most commercial software producers develop software with a narrow range of expertise as opposed to open source teams and that their primary motivation is profit to the firm. In contrast, open source developers are more motivated by personal interests or need of a particular application and usually include a much wider range of technical backgrounds. With higher manpower at the open source project’s disposal, development is speed up, bugs are fixed quicker and the overall quality of the product exceeds at sometimes a higher rate than a commercial counterpart.

The OSS in the field of GIS are growing rapidly. In general, these software follow the open GIS standards provided by Open Geospatial Consortium (OGC) and World Wide Web Consortium (W3C). The OGC is an independent organisation for the development of standards for geospatial applications and services. The growing trend of the adoption of open source technologies for GIS is largely due to the fact that many successful OSS projects have proven to perform at acceptable and sometimes exceptional levels as compared to proprietary products (Raghunathan, 2005).

The OSS have also made an impact on the web based GIS and mapping applications. Harper (2006) discussed the benefits of lightweight and easy to use open source solutions for Web GIS with basic functionalities. A case with the government of British Columbia and Refractions Research, Inc. Canada was also cited where an interesting relationship occurs between a company that uses OSS products to produce customised software for the government, charging only for consulting services. The open source web based GIS applications are developed using the existing Open Standards and protocols which provide a guide and well-defined structure for how GIS data can efficiently be transferred and shared across a heterogeneous global network of computers. The OGC Web Map Service, Web Feature Service and Web Coverage Service are the interface standards adopted for GIS data transfer on web (Internet-2).

OBJECTIVES OF THE PRESENT WORK
The main aim of the present work is to critically analyse popular open source GIS software to provide a better and comprehensive understanding to build spatial models for different applications in terms of their functionality, ease of operation and performance. The open source GIS software taken for detailed investigations include ILWIS, Open JUMP, Quantum GIS, uDIG, GeoServer and ALOV.

Investigations have been carried out on three aspects to study detailed features of these open source GIS software, which are geospatial database creation, spatial analysis and geospatial web capabilities. The efficacy of selected GIS software have been assessed by carrying out actual GIS work using these software. The range and depth of GIS tools and libraries available for these open source GIS software have also been discussed.

METHODOLOGY
The flow chart for the methodology adopted for the present work is shown in Figure 1. INVESTIGATION PHASE-I: GEOSPATIAL DATABASE CREATION
The creation of a clean digital database in GIS is the most important and time consuming task upon which the usefulness of any GIS project depends. For the creation of integrated geospatial database, the various steps followed include entering the spatial data, entering the attribute data, spatial and attribute data verification followed by linking the spatial and attribute data. Three open source GIS software chosen for investigating their capabilities with respect to geospatial database creation are ILWIS 3.5, Open JUMP 1.2.0 and Quantum GIS 0.11.0 (Internet-3; Internet-4; Internet-5).

In the initial step, scanned maps of MNNIT campus are obtained and geo-referenced. The next step includes creation of different thematic layers and attribute database followed by their integration. Figure 2, Figure 3 and Figure 4 show the thematic layers of academic area, hostels and staff colony created in ILWIS, Open JUMP and Quantum GIS respectively. 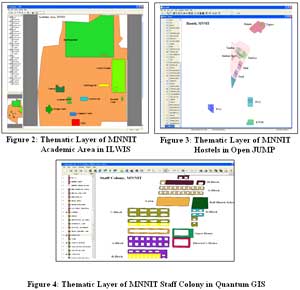 ILWIS, Open JUMP and Quantum GIS can support wide variety of data format like TIFF, JPG, PNG and can also read/ write ESRI shape files. The spatial features and attributes can be edited as per the needs for editing and updating the database. The editing tools of all three software have almost similar capabilities with ILWIS having an edge. ILWIS has rich projection and coordinate system library as compared to Open JUMP and Quantum GIS. Thus, ILWIS may be preferred for geospatial database creation.

INVESTIGATION PHASE-II: SPATIAL ANALYSIS
Spatial analysis functions may be considered as the heart of any GIS software. In essence, the geospatial database is a data model of the real world that can be used to simulate, predict or solve the real world problems through spatial analysis. The overlay analysis techniques, buffer operation, queries formation, etc. are some of the important features that make GIS an indispensable tool for spatial modelling. The spatial analysis functions of ILWIS, Open JUMP and Quantum GIS have been analysed using MNNIT geospatial database as created in investigation phase-I.

ILWIS provides a wide range of tools to perform operations on spatial data and uses a number of table window operations such as distance calculations, aggregations, etc. in the analysis of attribute data. Retrieval, reclassification and measurement operations mostly form the starting point in the data analysis process, and all these operations can be performed on vector or raster map, often in combination with attribute data, efficiently in ILWIS. The overlay operations form the core of any GIS project which are used to combine a number of maps together and to generate new information. ILWIS has a powerful tool to combine maps, called Map Calculation, that can combine many maps at the same time using arithmetic, relational or conditional operators. 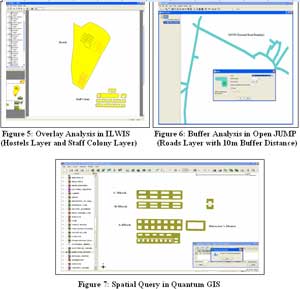 INVESTIGATION PHASE-III: GEOSPATIAL WEB CAPABILITIES
Geospatial web capabilities indicate to a web based GIS which can be modelled using the client-server architecture. A thin client model is where most of the processing work is done on demand in the server and the client does not perform any task other than to display the data on screen (Rajabifard et al., 2002). The advantage of this model is that users will not be required to install any additional software apart from a standard web browser. However, in order to reduce server loading, the http server, database and web GIS software do not necessarily have to reside on the same server and can be distributed across the internet. The open web GIS service architecture, proposed by OGC, is shown in Figure 8.

uDIG stands for User-friendly Desktop Internet GIS (uDIG 1.1.0) and provides a platform through which developers can create new and derived applications (Internet-6). uDIG is distributed under the open source LGPL license and provides a complete Java solution for desktop GIS data access, editing and viewing. It runs as a thick client natively on Windows, Mac OS/X and Linux with standard WMS, WFS and WCS geospatial web services. uDIG provides the framework on which new analytical capabilities can be built.

GeoServer was started in 2001 by The Open Planning Project (TOPP) (Internet-7). GeoServer allows the publishing of geospatial data as maps/ images (using the Web Map Server), as actual data (using the Web Feature Server), and allows users to update, delete, and insert features (using the Web Feature Server-Transactional). The focus of the software is ease of use and support for open standards in order to enable anyone to quickly share their geospatial information in an interoperable way. GeoServer is built upon GeoTools Java code library for geospatial data. It also serves as the Web Feature Server 1.0 and 1.1 reference implementation and also implementing the Web Map Server 1.1.1 and Web Coverage Server 1.0 specifications. GeoServer reads a variety of data formats, including PostGIS, Oracle Spatial, ArcSDE, DB2, MySQL, GTOPO30, Shapefiles, GeoTIFF, and a variety of others, etc. 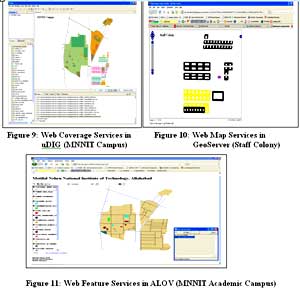 CONCLUDING REMARKS
Open Source GIS software have proven to be able to provide robust capabilities for geospatial database creation, spatial analysis and geospatial web applications. The present study attempts to bridge the knowledge gap between the real pros and cons of open source GIS software through detailed analysis and comparison of selective factors related to their functionalities and overall performance.

With regards to geospatial database creation, both ILWIS and Open JUMP GIS software are found to be suitable with ILWIS being slightly better. However, ILWIS has a clear edge over Quantum GIS and Open JUMP with respect to spatial analysis capabilities. Thus, ILWIS Open Source GIS software may be advantageously adopted for both geospatial database creation and spatial analysis.

GeoServer has been found to be a better option for publishing shape files and maps over the internet as compared to uDIG and ALOV. However, uDIG is good to setup Web Feature Services without programming experience as compared to GeoServer and ALOV. The ALOV is more suitable for experienced programmers who can build customised geospatial web services as per end users requirements.

The present study can be further extended by investigating the efficacy of other available open source GIS software such as DEEGREE and PostgreSQL for publishing maps and metadata on the web for development of Spatial Data Infrastructure.