1. Introduction
The Friedrichshafen-based Infoterra GmbH, a 100-percent subsidiary of Europe´s leading satellite provider EADS Astrium, currently installs a global distribution network for the radar satellite. The satellite´s Synthetic Aperture Radar (SAR) will deliver X-band radar data with a swath width of 10 to 100 km, at a resolution of 1 to 16 meters. The commercial exploitation rights for the new radar satellite are with Infoterra GmbH exclusively.

3. Data Distribution & Networking
In addition to the substantial preparation of its own TerraSAR-X services, Infoterra has begun the marketing of licenses. The company offers Direct Access Services, which provide image data – either for individual use or for regional sales – directly to station operators around the globe. Now, users and regional distributors have the opportunity to ensure their data access in advance. While the scientific use of TerraSAR-X data will be coordinated by the German Aerospace Center DLR, Infoterra GmbH will be the exclusive commercial provider of this data. Infoterra invites leading SAR experts to join a worldwide cooperation network and participate in the TerraSAR-X innovation step.

4. Satellite Specification
Surrounding the Earth on a polar orbit at an altitude of 514 kilometers, TerraSAR-X will be collecting new-quality X-band radar data of the entire planet. The satellite will operate independent of weather conditions, cloud coverage, and illumination and will be capable of delivering data at a resolution of up to 1 meter. 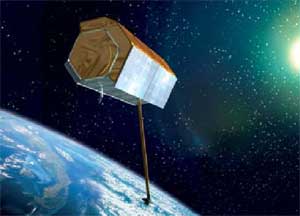 Fig.1: TerraSAR-X Spacecraft
TerraSAR-X, which is due to be launched during the second quarter of 2006, is currently being developed by EADS Astrium, while the DLR prepares the ground segment.

The Characteristics of satellite, orbit and SAR sensor are listed below:

5. Basic Products
The TerraSAR-X Basic Image Products are described by the following characteristics:

Depending on the applications, these image characteristics can be individually combined through a dedicated data order by the Partner and for its customers. The TerraSAR-X Basic Image Products will be delivered in CEOS Level 1B format to the end users.

5.1 High Resolution SpotLight (HS)
In this mode, the most favourable combination of the key features results in the following product specifications: 5.3 StripMap
The ground swath is illuminated with a continuous sequence of pulses while the antenna beam is fixed in elevation and azimuth. This results in an image strip with a continuous image quality in flight direction, at a 3-meter resolution. The product specifications will be described by:

5.4 ScanSAR
Within one week large areas of up to 100,000 km² can be covered in 16 m resolution anywhere on the globe. In the ScanSAR mode, a swath width of approx. 100 km will be achieved by scanning four adjacent ground sub-swaths with quasi simultaneous beams, each with a different incidence angle. The ScanSAR Mode will be described by:

6. Company Background
Infoterra was launched in 2001 for the commercial exploitation of TerraSAR-X. In prototype projects, the company develops production chains for a new generation of geo-information products and services, which will evolve once the new TerraSAR-X data is available. Today, future markets are being stimulated with products and services derived from satellite and airborne data available today.

EADS Astrium is Europe’s leading satellite system specialist. Its activities cover complete civil and military telecommunications and Earth observation systems, science and navigation programmes, and all spacecraft avionics and equipment. In addition, the relevance of services based on Earth observation data is increasing constantly. Within EADS Astrium, this is covered by the European Infoterra Group. EADS Astrium, wholly owned subsidiary of EADS SPACE, which is dedicated to providing civil and defense space systems. In 2003 EADS SPACE had a turnover of € 2.4 billion and 12,000 employees in France, Germany, the United Kingdom and Spain.

EADS is a global leader in aerospace, defense and related services. In 2003, EADS generated revenues of € 30.1 billion and employed a workforce of more than 100,000.