1.1 Introduction
Mangroves are a group of salt tolerant plant species that occur in the tropical and subtropical intertidal estuarine regions, sheltered coastline and creeks and are dominated by partly submerged selerophyllous plant species that are taxinomically unrelated. Mangroves constitute a dynamic ecosystem with a complex association of species both of floras and fauna of terrestrial and aquatic systems and the vegetation presents an evergreen type with varied life forms. The four major roles of mangroves:

1.2 Scope And Objectives Of the Study
Satellite Remote sensing has been operational for nearly two decades. However, with rapid improvement in spatial and spectral resolution of data obtained in visible and near infrared region and availability of data in microwave regions, there is a need for continued research in the field of aquatic environment from satellite data. Besides, there is number of Image processing and analytical tools like Geographic Information System are available. GIS provides the opportunity to overlay different layers of information obtained from satellites and other sources and optimally extract the required information.

The subject selected for the study is with reference to the following themes:

The specific objectives under these sub themes which contribute to the complete and comprehensive assessment of the mangrove environment of selected area are: 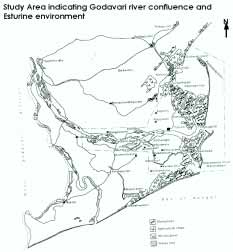 2.2 Main Problems in the study area

2.3 Materials And Methods
As the objective was to study to evolve Remote Sensing parameters for monitoring the mangrove environment and its ecology.For the study area, the temporal satellite imagery data and other collateral data were interpreted and maps depicting changes were prepared.

Other reference information consulted during interpretation (visually and digitally) of IRS data.

2.3.2 Equipment Used:
Remote sensing analysis, though possible without the use of complex equipment, does not yield best results without the use of appropriate equipment. In this study, the visual interpretation was done by delineating the features from FCC on a simple light table for better illumination.The digital image processing like image enhancement was done on work station (DecAlpha) using ERDAS Imagine image processing software.

2.4 Mapping of mangroves and its extent in the study area
The IRS – IB, LISS II Imagery dated March,1995 is used for the preparation of landuse / landcover maps on 1:50,000 scale corresponding to Survey of India toposheets 65L/1,L/2,L/5 and L/6. The Landuse/landcover maps are interpreted visually by following the legend prescribed by Department of space under National mission programme . Sequential nature of IRS data provide opportunity to monitor changes in the landuse activities in the mangroves .IRS has been quite extensively used for Mangrove landuse pattern. Both visual and digital analysis of IRS data provided useful information . Limited ground truth is carried out on coastal features such as mangrove forest, fish ponds, saltbeds and other landuses. Information obtained from these flights was used in association with that obtained from IRS data analysis.

The following table shows the statistics of various landuse/landcover classes that exists in the study area.

Table2.1:Statistics showing coverage of various landuse/landcover classes in Hectares .(Figure 2.1 and Figure 2.2) (Source: Based on visual interpretation of IRS-1B imagery,1995) 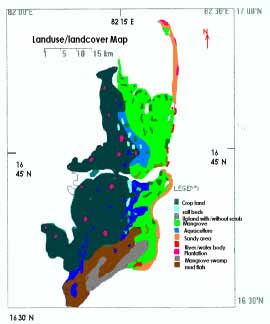 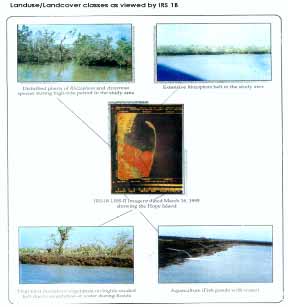 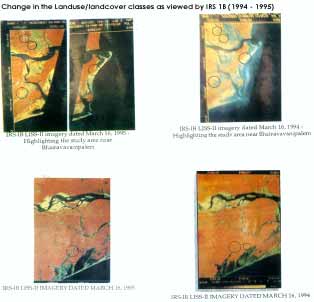 Figure 2.4
The following table shows the change statistics of various landuse/landcover classes that exists in the study area.

* Aquaculture – Mangrove and the nearby swampy/marshy area is converted to fishponds.
* Cropland – Cropland is increased with the corresponding decrease in the scrub area.
* Marshy/Swampy area – Marshy/swampy area is increased due to inundation during floods.
* Plantation – Some regeneration activities are taking place (Artificial growth of mangrove forests).

3.0 Summary and Conclusions
The IRS -1B,LISS II Imagery dated March,1995 is used for the preparation of landuse/landcover maps on 1:50,000 scale corresponding to Survey of India toposheets 65L/1,L/2,L/5 and L/6, the landuse/landcover maps are interpreted visually by following the legend prescribed by Department of space under National mission programme. Sequential nature of IRS data provide opportunity to monitor changes in the landuse activities in the mangroves.

For a comparative analysis and change detection, the current landuse information with past .As such interpretation of data for the period February 1994 is carried out. It was observed that during a span of one year period, the spread of aquaculture has caused destruction of mangrove upto 22.69 Ha. per annum in area particularly in the I Polavaram mandal Region. This would have definite impact on the ecology of the area.

It was observed that due to pressure of population, settlements have been established by clearing mangroves. Increasing use of pesticides, industrial pollution near by study area, the ecosystem has been changed completely. Many areas under forests were found have been converted into fishponds and salt beds. The corresponding map depicting changes was produced in the study.