Working extensively in the field of Hydrology, Mauro Arcorace, Hydrolic Engineer at UNOSAT|UNITAR, shared his experience how geospatial knowledge has added value to his young professional career.

When I enrolled into Civil Engineering course in university, I never thought that Geomatics would become so important in my working life. My experience in the world of Geomatics began at the Polytechnic University of Turin, where I attended classes of Topography and Geomatics and I studied intensively theory and practical techniques of cartography, GPS and GIS to prepare for final examinations.

The acquired skills in Geomatics have proven useful during the preparation of my master’s degree thesis [1], when I had to carry out scheduled activities for a joint research project on climate change, “Rede Litoral”, between Turin Polytechnic and San Paolo University. The aim of this marine modeling was to study the wave climate anomalies due to climate changes in order to make a calibrated ocean wave database for the sea area in front of the Brazilian coast of Săo Paulo. The acquired knowledge on cartography and on the use of GIS allowed me to create the needed topographical input, a 3D bathymetry of the area of study for two-dimensional hydrodynamic simulations of the ocean waves, and to prepare effective maps for presenting the obtained results. This thesis work has been evaluated with full marks during the dissertation of my thesis and has also been awarded with a prize by the Polytechnic University of Turin. Outcomes have been published into a Springer scientific journal [2], which marked the beginning of my professional career in the field of Geomatics.

Right after my graduation, in October 2012, I worked as Junior GIS analyst of the Rapid Mapping Team for Information Technology for Humanitarian Assistance, Cooperation and Action (ITHACA). I was introduced to the emergency response sector, where GIS is used to generate information in pressing time and where accuracy is fundamental. It was in ITHACA environment that I started working on digitization and interpretation of satellite imagery for disaster management and humanitarian response.

Some months later, in May-June 2013, I was working as a research assistant for Gennaro Bianco, full Professor of Hydraulics at the Polytechnic of Turin, on a research project about flood risk assessment and mitigation of the city of Susa, Turin, Italy. During this research activity, I created a detailed-conditioned 3D terrain model of the urban scenario of the Dora Riparia River. This was needed for numerical and physical hydrodynamic modeling of Susa city for flood risk assessment and management. This high resolution conditioned DEM was the result of a combination of LIDAR data and field data collected from different topographical surveys. During this experience, my knowledge on GIS, CAD drawing and Cartography was extremely useful and additionally, I acquired new skills at professional level on DEM conditioning, GIS data management and mapping.

After only two months, I was presented with an unexpected and important opportunity. Thanks to the Scholarship “Master dei Talenti Neolaureati” of the Fondazione CRT, in June 2013 I started one of the most important working experience of my life, my internship at the Operational Satellite Applications Programme (UNOSAT) of the United Nations Institute for Training and Research (UNITAR).This meant to me a great change, because I had to leave my country for Geneva, not having travelled a lot in my life until then. Also from a linguistic point of view, the change was great, having to use English every day in my work environment and needing to learn a bit of French just to survive. I was very excited about this new life, but at the beginning it was not easy at all, having to find an apartment to rent in the very crowded house market of Geneva.

I can easily remember my first working day at CERN. Yes, the famous CERN of Geneva. Despite most of UN agencies and other international organizations located in the area of Geneva city near the “Palais de Nations”, UNOSAT’s main office is located at CERN’s experiment site in Meyrin, a small village of the Geneva canton near the French border. Once I signed my new contract with UNOSAT at CERN, I was challenged with quite a long list of activities scheduled for the coming eight months of traineeship. Jumping into this new assignment was stimulating and gave me the opportunity to see the application of Geomatics from another perspective – the operation of United Nations. Coming from research background, the integration into the complex world of UN system was not easy; it took me several months to understand the mechanism and roles of the institute within the existing framework. My knowledge in Hydrology, programming and Geomatics contributed to the applied research project on hydrological DEM conditioning and flood modeling that UNOSAT was carrying out together with USGS. As a result, I was offered my first consultancy contract with UNOSAT.

In March 2014, I took a plane to London to present the UNOSAT-USGS’s SRTM-FM dataset [3] at the Global Flood Working Group Workshop in the near city of Reading. The 3 days’ workshop gave me the opportunity to meet several delegates from space agencies, academia, research centers, UN agencies and NGOs involved in this area of application (NASA, ESA, university of Maryland, JRC, CIMA Foundation, WMO and others). I got to understand more about existing initiatives and on top of that, build new partnership.

Consequently, I was involved in the creation of a new applied research project for developing a Global Flood Early Warning System for emergency response and disaster risk reduction [4, 5]. Again my skills in Hydrology, Hydraulics and Geomatics demonstrated to be useful resources for UNOSAT. At the moment, I am involved in applied research projects on hydrological and flood modelling, including the support of rapid mapping for natural disaster emergency response, and training activities on GIS for DRR and field data collection using GPS and UAV.

For the future, I would like to continue this experience at UNOSAT with particular focus for research and I look forward to enrich my knowledge in Hydrology, Geomatics, Flood Modelling and GIS. 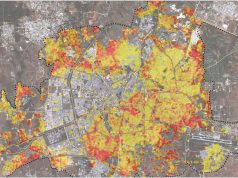 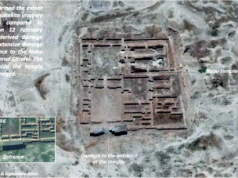 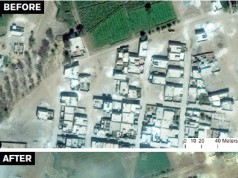 The Battle for Kobane