Honey, I shrunk the satellite!

Did you ever imagine that satellites could be built in your garage and launched from your backyard? Yes, with miniaturisation of satellites, this could be possible in times to come! 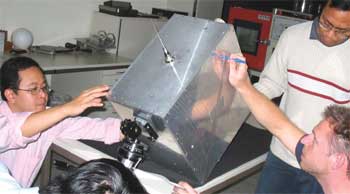 This was initially thought of by Prof Sir Martin Sweetings of SSTL (Surrey Satellite Technology Limited) in the late 70s and realised in 1981 when the first micro satellite UoSAT-1 was sent into the space. This satellite weighed only 50 Kg, was built in less than 30 months at a cost of less than UKP 0.5 million. Time is not far when commercially available off the shelf (COTS) electronic components and other materials will be used to manufacture a satellite.

ISRO has already set the trend (details later) by sending eight micro satellites into the space along with CARTOSAT-2A by its workhorse launch vehicle PSLVC9 on April 28, 2008. However, this was not the first time that ISRO has launched small satellites. On May 26, 1999, along with the launch of IRS-P4 (OCEANSAT) by PSLV-C2, 110 Kg KITSAT-3 of Republic of Korea and 45 Kg DLR-TUBSAT of Germany were launched. This heralded India's entry into competitive launch service market. Later, on January 10, 2007, during the launch of CARTOSAT-2 by PSLV-C7, 56 Kg LAPAN-TUBSAT of Indonesia and 6 Kg PEHUENSAT-1 of Argentina were also launched. LAPANTUBSAT carries two Charge Coupled Device (CCD) cameras with 5 m and 200 m ground resolutions while the nano-satellite PEHUENSAT- I was intended to gain experience for designing complex missions in educational, technological and scientific fields. 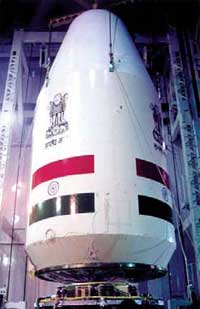 Many terms are coined to describe this rediscovered class of satellites, including SmallSat, CheapSat, MicroSat, MiniSat, NanoSat and even PicoSat and FemtoSat! The US Defense Advanced Research Projects Agency, DARPA refers to these as LightSats, the US Naval Space Command as SPINSats (Single Purpose Inexpensive Satellite Systems) and the US Air Force as TACSats (Tactical Satellites). 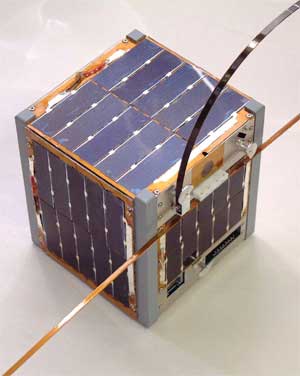 Nevertheless, in recent years a general method of classifying satellites in terms of deployed mass has been adopted. The boundaries of these classes are an indication of where launcher or cost tradeoffs are typically made, which is Indonesian and German engineers working on LAPAN-TUBSAT frame also why the mass is defined including fuel (wet mass). Wikipedia classifies all the satellites under 500 Kg in miniaturised satellite or small satellite category. These small satellites have further been classified as in The term ‘mini-satellite’ usually refers to an artificial satellite with a wet mass between 100-500 Kg (220- 1100 lb), often simply called ‘small satellites’. Mini-satellites are usually simpler and use the same technologies as larger satellites.

Micro-satellite or ‘microsat’ is usually applied to the name of an artificial satellite with a wet mass between 10 and 100 kg (22-220 lb). However, this is not an official convention and sometimes microsats can refer to satellites larger than that. Sometime designs or proposed designs of these types have micro-satellites working together or in a formation. The generic term ‘small satellite’ is also sometimes used.

The term ‘nanosatellite’ or ‘nanosat’ is usually applied to the name of an artificial satellite with a wet mass between 1 and 10 kg (2.2-22 lb). Again, designs and proposed designs of these types usually have multiple nanosatellites working together or in formation (sometimes the term ‘swarm’ is applied). Some designs require a larger ‘mother’ satellite for communication with ground controllers or for launching and docking with nanosatellites.

There is another kind of swarm where the satellites exhibit autonomous collective behaviour. These devices do not have whole lot of intelligence in each one, and do not need to communicate with each other but when taken as a group they can complete complex tasks that are difficult or impossible for large single satellites to achieve.

Pico-satellite or ‘picosat’ is usually associated with an artificial satellite with a wet mass between 0.1 and 1 Kg (0.22-2.2 lb). These satellites can also be used in ‘swarm’ similar to the nano-satellites. The CubeSat design is one such example of a picosatellite.

Microsats can use conventional radio systems in UHF, VHF, the S-band and X-band, although often miniaturised using up-to-date technology as compared to larger satellites. Tiny satellites like nanosats and small microsats may lack the power supply or mass for large conventional radio transponders and various miniaturised or innovative communication systems have been proposed, such as laser receivers, antenna arrays and satellite to satellite communication networks. Few of these have been demonstrated. Miniaturised satellites allow for the opportunity to test new hardware with reduced expense in testing.

Furthermore, since the overall cost risk in the mission is much lower, more up-todate but less space-proven technology can be incorporated into micro and nanosats than can be used in much larger and more expensive missions with less appetite for risk. SuitSat, also known as RadioSkaf, Radio Sputnik, and AMSAT-OSCAR 54, is a retired Russian Orlan spacesuit with a radio transmitter mounted on its helmet. Suit- Sat-1 was deployed in an ephemeral orbit around the Earth on February 3, 2006. SuitSat-2, another spacesuit satellite, is currently in development. A CubeSat is a type of space research pico-satellite with dimensions of 10 x 10 x 10 centimetres (volume of exactly one litre), weighing no more than one kilogram and typically using commercial off-the-shelf electronic components. Developed through joint efforts, California Polytechnic State University and Stanford University introduced the CubeSat to academia as a way for universities throughout the world to enter the realm of space science and exploration. Presently, a large number of universities and some companies and organisations around the world are actively developing CubeSats. With their relatively small sizes, CubeSats can be made and launched for an estimated US $ 65,000-80,000 each (2004 USD). This low price tag, as compared to most satellite launches, has made Cubesat a viable option for schools and universities across the world. Most CubeSats carry one or two scientific instruments as their primary mission payload. 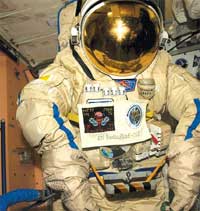 Later in 2008, a launch is planned that will include Auburn University's AubieSat-1. The launch date is undetermined yet. A fourth-quarter-2008 launch is planned for KySat-1, developed by multiple Kentucky universities. By mid-2009, the University of Leicester, UK, plans to launch a Cube- Sat named PLUME to detect space dust. It will be the first British CubeSat to be launched.