Calculating Locations
A GPS receiver determines its position by using the signals that it observes from different satellites. Since the receiver must solve for its position (X,Y,Z) and the clock error (x), four SVs are required to solve receiver’s position using the following four equations:

where (x1,y1) (x2,y2) (x3,y3) and (x4, y4) stand for the location of satellites and R1, R2, R3, R4 are the distances of satellites from the receiver position (Figure-3). Hence solving the four equations for four unknowns X,Y, Z and x, the position or location of the station is calculated.

Differential GPS
In order to achieve on-line positioning with high accuracies, Differential GPS (DGPS) is used. Differential positioning user the point position derived from satellite signals and applies correction to that position. These corrections, difference of determined position and the known position, are generated by a reference receiver, whose position is known and is fed to the instrument, and are used by the second receiver to correct its internally generated position. This is known as Differential GPS (Figure-4). It is assumed that the two receivers suffer from approximately the same magnitude of geometry and timing errors and the most of the common errors cancel out using this correction technique. To remove Selective Availability (SA) and other bias errors, differential corrections are computed at the reference station and applied at the remote receiver at an update rate that is less than the correlation time of SA, which is usually less than twenty seconds. The differential positioning accuracy is of order of 1-5 m. 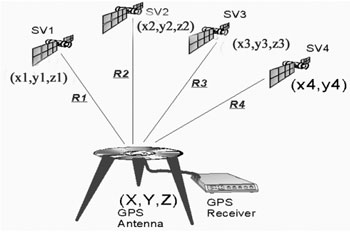 Standard Static
It involves setting up two receivers, one at a reference point and the other on the station to be determined, and observing them simultaneously for at least 1 hr during a single survey session.

Dynamic Observation Techniques
Dynamic surveying implies some sort of motion. It allows one or more receiver(s) to move during the survey session to collect more point or baselines (the distance between two GPS sets) while other receiver is kept stationary at a base station. The basic difference between various dynamic techniques is that how quickly one can move from one point to the other. The dynamic techniques are further classified as,