Abstract
Growing urbanisation is typically associated with increasing storm water runoff and non-point source pollution. Low impact development (LID) has been extended as a new approach for storm water management. LID components are utilised as supplementary to conventional drainage system in urban areas to decrease the runoff and alleviate non-point source pollution from storm water. In this study, a GIS-based fuzzy model base on LID site design criteria and hydrology principals was designed to determine suitability of potential locations for LID practices (especially bioretention) in a specific area. A dynamic rainfall-runoff simulation model (SWWM) was exploited to derive peak flows of links and nodes in the conventional drainage system. Finally, two models were compared to evaluate the accuracy of GIS- based fuzzy model and its criteria.

Introduction
A wide range of water-related problems are associated with urbanisation: water runoff and flooding, pollution and sedimentation, etc. Increasing population has led to need of more land for housing and accommodation. The growing housing demand in urban areas is typically associated with increased storm water runoff and flood (Cai, 2003). Urban storm water is rainfall and snowmelt that seeps into the ground or runs off the land into storm sewers, streams and lakes. The bioretention concept was originally developed by the Prince George’s County, Maryland, Department of Environmental Resources, in the early 1990s. The development and early adoption of bioretention systems were motivated by a number of beneficial characteristics of the systems. Apart from their expected efficiency in reducing storm flows and retaining pollutants, bioretention units can be integrated in urban development’s and can provide at-source treatment. The installation of these systems is inexpensive and little system maintenance is required after installation (Roy-Poirier, 2009).

2. Study area
The study area includes 7.14 hectares of residential areas in Kuala Lumpur, Malaysia. This area was chosen because of its position that reflects the development of urban area and hence impact on surface water runoff in this area. This residential area consists of two storey terrace houses, shop houses, mosque, parks and playgrounds, and childcare centre. Table 1 and Figure 1 show the type of land use. Quickbird satellite imagery, obtained from Malaysian Remote Sensing Agency (MACRES) on February 11th, 2004, was used to classify land cover into two types; pervious and impervious surfaces. A per pixel supervised classification method were accomplished for this process (Rusli and Ludin, 2009) using Erdas Imagine software. A post-classification procedure was then employed to improve classification accuracy based on existing information of the area and land use categories, and other ancillary data available (Fried et al., 1988) such as layout plans and site observations.

Although there are only two types of classes involved in this process; a preliminary determination of the study area was still conducted for feature conformation (Rusli and Ludin, 2010). This has been made to ensure smooth and more accurate classification process. Figure 2 shows the classified image. Design storm or storms data are used to analyse the device. Nasir (2005) calculated stormwater design for the study area (Taman Wangsa Melawati) in 10, 50 and 100 years return with 15, 30, 60 and 120 minutes duration. In this study a 24-hour storm with a 10-year return period (the rainfall that occurs in a 24-hr period on average once every 10 year) was selected (Figure3). 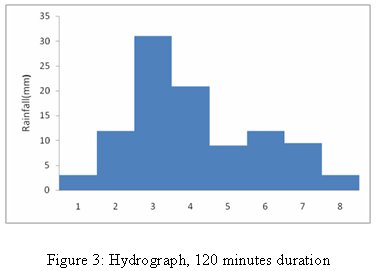 4. Fuzzy GIS-based model
Site selection analysis decides the best location for various land uses. The success of a site selection analysis can be directly attributed to comprehensive project preparation, along with an objective, methodical and detailed process. Site selection analysis can be improved by using GIS. GIS is a suitable tool for site selection since it has the capability to manage large amount of spatial data that comes from various sources (Kao et al., 1996). Because there are no special criteria or limitations for low-impact development location, GIS-based fuzzy model was utilised to rank suitability of potential areas and locations for LID practices specially bioretention cell. In the GIS context, land allocation is considered a fuzzy concept expressed as fuzzy set membership (Burrough et al.1992, Hall et al. 1992).

The decision maker’s preferences with respect to the evaluation criteria are incorporated into the decision model. The preferences are typically expressed in terms of weights of relative of relative importance assigned to the evaluation criteria under consideration. Broadly speaking, the purpose of criterion weights is to express the importance of each criterion relative to other criteria. The derivation of weights is a central step in eliciting the decision maker’s preferences. Given the set of alternatives, attributes, and associated weights, the input data can be organised in the form of decision matrix or tables (Malczewski, j., 1999). 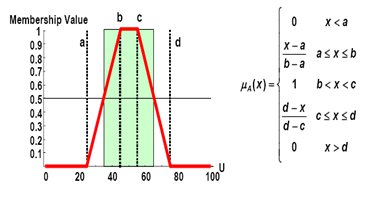 According the Bioretention cell design’s specifications and criteria manual, published by Prince George’s County, potential bioretention facilities should be applied where:

Based-on above design specification, and hydrology principal, following criteria and their fuzzy membership were assumed: slope, distance from stream network, distance from drainage point, and distance from building structure (Table 2). A convex combination is a linear combination of points where all coefficients are non-negative and sum up to 1.

The following Equation and the land parameter weights w in Table 3 have to be used in the calculation of the convex combination of the raster layers that contains the fuzzy values: 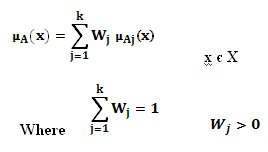 There is no exact method to weight fuzzy parameters especially in this study. The following weights were presumed based on their importance (Table 3). Finally, a fuzzy site selection map was elicited from fuzzy maps (slope, distance from construction, point and drainage network). The best locations for bioretention cell are shown in black blue which fuzzy membership is 1(Figure 4). According to bioretention site design, Sub-drainage areas should be limited to less than 1-2 acres, and preferably less than 1 acre (4, 046 square meters). Therefore, 8 bioretention cells were selected in this study. The routing portion of SWMM transports this runoff through a system of pipes, channels, storage/treatment devices, pumps, and regulators. SWMM tracks the quantity and quality of runoff generated within each sub-catchment, and the flow rate, flow depth, and quality of water in each pipe and channel during a simulation period comprised of multiple time steps (EPA, 2010).

SWMM uses a method that contains nodes, links and catchments to model the stormwater and calculating the runoff in a specific area. Runoff is gathered from each catchments and spilled to its correspond nodes. The first step in modelling the runoff is drawing the catchments in SWMM. 30 catchments were manually drawn based on the tin’s aspect map. Aspects can be thought of as the slope direction. The values of the output raster will be the compass direction of the aspect.

6. Result
By categorising the peak flow in three categories the below map was derived. According to Figure 5, all bioretention cells are located near the conduits with more than 0.1 cms peak flow. According to Figure 6, most of the links beside LID components have peak flow more than the average peak flow of conventional drainage system. The red column shows the average peak low and the blue column depicts the peak flows of Links which are located besides bioretetion cells. It demonstrates the efficiency of simple GIS-based GIS model to find the location of bioretention cell in a small catchment. Conclusion
Flash floods are becoming more prevalent nowadays in big cities in Malaysia. Rapid and uncontrolled development projects aggravate the problem. Lack of space for the construction of flood quantity and quality mitigation facilities has prompted authorities to look for other solutions for runoff control. One of the approaches is to regulate flow at the upstream area. That is why this study area (Taman Wangsa Melawati), which is located at the upstream of Klang river basin, was selected. Taman Wangsa Melawati catchment, which drains to Sg. Gisir is used in this study, to evaluate the impacts of LID for storm water management at a small scale. The catchment is fully developed where 83 percent of the area is covered by impervious surfaces.

Traditionally, stormwater detention facilities have been used to control peak flows, but little attention has been given to actually decreasing the total runoff volume from developed land. Non point source pollution has become an additional concern for Runoff control (Friedlich, 2005). LID provides solutions to these problems. LID is used to reduce the amount and enhance the quantity of runoff. Bioretention cells are particulate LID devices which have the capacity to store stormwater and ability to filter pollution as the runoff infiltrates in them.

Installing LID component in suitable location increases the efficiency of LID operation. A GIS-based fuzzy model was employed to find the suitability of areas in the case study. The method comprises site design criteria, hydrology principal and criteria’s weights. In addition, a dynamic simulation programme (SWMM) was utilised to evaluate the accuracy of GIS-based fuzzy outcome and compare two different models. First of all, bioretein cell were located near the links with high peak flows which illustrate the accuracy of GIS-based fuzzy model and its criteria. In the second place, GIS-based fuzzy model is quite easier and faster than SWWM model and it can be extended to use in different areas. Furthermore, SWWM is a time consuming model in compression the GIS model.