Abstract
In India, 65 percent of total geographical area is covered by hard rock formation. Using remote sensing and GIS technologies, suitable sites for artificial recharge aquifer in such areas can easily be identified, according to a study carried out in the Jumar river basin in Ranchi district in India. As part of this study, drainage density, frequency – including stream length and bifurcation ratio were calculated though Survey of India (SOI) topo sheet. Scenes contour is digitised for preparing elevation map and drainage pattern analysis. Amount of rainfall, soil type and water level of the well were some important data points which are collected and estimated during the field study. They were key parameters for identifying groundwater prospective zones. Digital as well as visual interpretation techniques were applied for creating geological map, lineament map, and land use/land cover map and also creating DEM, TIN and GRID modules. Groundwater elevation models were created through Surfer software to analyse groundwater flow direction, groundwater flow accumulation and groundwater contour. All these thematic layers were analysed after converting them into overlay. The GIS technology provided suitable alternative for efficient management of large and complex database to study groundwater resource and design suitable exploration plan of artificial recharge zone.

Groundwater is a dynamic and replenishable natural resource, but in hard rock terrain availability of groundwater is limited. Occurrences of groundwater in such rock are essentially confined to fractured and weathered horizons. In India, 65 percent of the total geographical area is covered by hard rock formation. Therefore, efficient management and planning of groundwater recharge in these areas is necessary. (Saraf and Choudhury 1997, 1998)

The groundwater recharge is the entry of water from unsaturated zone into saturated zone below the surface (Freezee and Cherry, 1979; Sophocleaus 2002). There are many factors controlling the occurrences and path flow of groundwater like topography, litho logy, structure weathering grade, fracture extent, permeability, slope, drainage pattern, land from land use/land cover and climate (Jaiswal et al., 2003; Yeh et al., 2008). To achieve the quantification of these data, it is necessary to identify and characterised the uncertainty data (Nilson et al., 2006).

Ranchi is physiographically a plateau region. The average elevation is about 600 meter above mean sea level. The western part exceeds 760 meter above mean sea level. The geomorphologic units consist of shallow weathered pediment, structural hill and residual hill overlain by red and yellow soil along with lateretic soil, which is a major soil in the district resulting in poor fertility, coarse texture and low water capacity. The soil of upland is usually reddish to yellowish colour and lowland consists of miner sandy loam. Geology of the Ranchi region is occupied by granite and granite gneiss rocks. Younger formation consists of red / laterite soil and older formation consist of metamorphic rocks, schist and phyllite. These rocks contain numerous compositions of various rock types such as phyllites, mica, Schist, quartzite, etc including dyke of dolerite, vein of pegmatite and quartz. The oldest rocks in the area were originated from sedimentary rocks which underwent a series of deformation and metamorphism. These were later implemented by Chotanagpur granite and granite gneiss (after Sarker ,Saha and Miller 1969). About 103.6sq km area in Eastern north of Ranchi district is covered by sedimentary rocks of goundwana age.

Ranchi area has tropical to sub tropical climate with an average rainfall of 1300mm. Most of the water goes into river and very little water is stored in subsurface, which leads to the scarcity of water in this region. The study attempted is to utilise the available surface water from dam, nalabandh, ponds, and small rain water reservoir.

Rainfall and runoffs were determined using soil conservation method. Soil erosion data was estimated and calculated during the field survey. Rainfall data is collected from Dept of Agriculture and Physics, BAU, Kanke, Ranchi. Depth of water table used for ground water investigation has been collected from Water resource department, Government of Jharkhand. Figure 1
Physiographic
The major topographic region of this area is divided into two water shed areas. One is Jumar river and the other one is Potpoto river. The western parts show residual hills and also some of the southern middle part shows maximum height of 720mts. The plateau slopes are very gentle to steep. Isenberg, residual hill, structural hill and valley are among some of the physiographic structures found in the region.

Geomorphology
The major geomorphic units identified in this area are Plateau Weather Shallow (PWS) which is 8-10mts, Plateau Weathered Moderate (PWM) which is10-15mts, Pediment Isenberg Complex (PIC). Some residual hills and Isenberg occur in the western part of the area. Valley and gullied valley are covered by a crossings river area and the plateau is covered by the weathered shallow part of area.

Lithology (geological unit)
Lithology of the area is mainly divided into two parts. Most of the parts consist of middle upper proterozoic Chotanagpur granite gneiss rocks type. Some lower part of the area consists of lower middle proterozoic unclassified meta sedimentary phyllite rocks. In this area faults, fracture/lineament generally act as a medium for movement of ground water in hard rock. Along this zone the yields are significant and the wells are likely to be sustainable for longer duration.

Soil
The soil formation of Ranchi area is:

The soil formation of Kanke area:

The weathered soil can be divided into red and yellow soil, grayish yellow soil, and sandy soil. The grain size analysis of these soils was collected from the data recorded by the civil depth of Engineering.

Climate
The climate is characterised by maximum and minimum temperature of 43º- 44º and 5º-6º respectively. The area falls under tropical to sub-tropical climate with average rainfall of about 1300mm. Important rivers of this area are Jumar and Potpoto. 20 percent of area is covered by forest and rest by hill, agriculture low land and settlement.

Data used
The different sets of data used for the study with their source are given in table. In the third stage, digital image processing of the satellite data was done for geo-referencing & geometric correction. This was followed by creation of different thematic layers using supervised classification technique. All the attributes from the collected data were summed to create the buffer map for agriculture area & settlement area. It was then followed by creation of other important data which were used to determine the ground water potential at the later stage like landuse/landcover map, geological/lineament map, geo-morphological map and hydro-geo-morphological.

In the fourth stage all above themes were further processed and analysed in overlay. Finally analysis was done using arithmetic, logical and conditional system for suitable site selection. 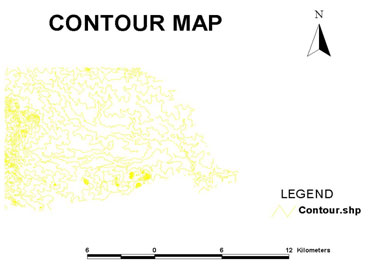 Figure 2
Recharge zone with contour and slope Maximum contour height of study area is 72m, along the western part and northwest part. Monadnocks are present along the north part so there is less recharge percolation. While along the eastern and north eastern sides, slope is less having chance of less run off and good percolation. If soil and geology support. So recharge zone is possible along E-NE region. Show on fig-2. Figure 3
Recharge zone with Drainage pattern The area shows dendritic pattern, which indicates less percolation and maximun run-off. Micro level drainage pattern has been traced out from the digitally proceessed image of the area, the darinage pattern is sub-dendritic on gentle slope.it is demarcated two basin area Jumar river basin and Potpoto river basin . micro water level thirty six sub water boundaries have been initially delineated and drainage density of each of theses calculated using GIS software. the water from stream can be diverted from the main canal to a series of smaller ditches spread in the dendritic pattern. The bifucation of ditches continues untill practically the water isinfilteration in the ground. Show on (figure-no-3, and figure-4) Figure 5
Hydrogeomorphologically, this area is classified into different zone covered by residual hills, inselberg, valley, valley gullied, plateau weathered shallow, plateau weathered moderate, plateau slightly dissected residual hills are the products of the process of pediplanation, which reduces the original mountain mass into a series of scattered knolls standing on the Pedi Plains (thornbury,1990). In the imagery they exhibit grey tone and coarse texture in black and white image and dark green colour in false colour composite.

Recharge zone with Geology and Lineament The area covered is a part of Chotanagpur Plateau , where the main rocks type are granite. With these granite rocks , there are enclaves of metamorphic rock mostly with east and west trend consisting of mica, schist, crystalline limestone, clay schist rock.

Meta sediment occurring in the north and western part viz. phyllite and schist. Show on – figure-6 and 7) Figure 7
Lineaments foliation is mostly clubbed towards E-N-E direction. Within hard rock ground water potential is only occurred along the weaker zone lineament and foliation. Lineament is defined as the linear deformation occurred within the rock due to either some erosion causes or some structure causes and it is very easily identified through the help of satellite data and aerial photograph. So lineament is nothing but the weakness in a zone. According to the length it is characterised as mega lineament and minor –lineament. According to the occurrence it is characterised as confined and unconfined lineament. Confined and mega lineament zone are very good for water carrying potential and natural artificial recharging. Figure 8
TIN model Tin model generate Height and slope aspect of the area. This is based on an irregular distribution of elevation point. 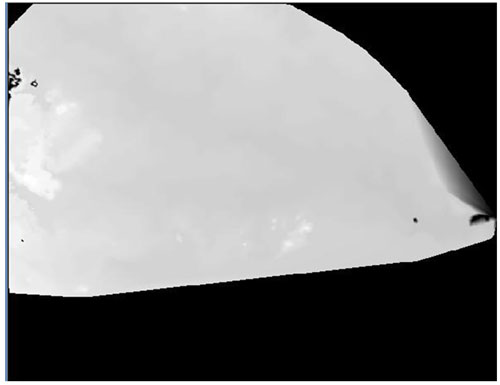 Figure 13
Outcome of the project
Based-on the study and the analysis which was done, we were able to recommend an action plan to conserve and increase the ground water potential though rainwater harvesting across Jumar river basin. Following are the few recommended aquifers which can be built to help achieve the desired goal: site for check dam, site for “Nala Bandh”, small reservoir and farm ponds.

The list of recommended site conditions in order to build any of the above mentioned aquifer includes:

After all the analysis and calculations a list of recommended locations were finalised to construct the above mentioned aquifers includes:

These aforementioned recommendations can help alleviate the water scarcity problem of the dry area of Ranchi district.