A Gharagozlou
Research Institute of National Cartographic Center of Iran (NCC),
Azad University, Tehran, Iran
[email protected]
This paper tries to study the role and level of accessibility to accurate information of the land or in fact the identification card of the land in national level so as to identify the resources for ecological studies with a land use planning approach

At the beginning of the third millennium, excess land use and involvement of human beings in environment have imposed a great pressure on the environment so that it is quite noticeable that from the scientific & technical viewpoint, especially in Asian and African countries, development should be made through a proper land use plan and with minimum destruction of the environment.

As the infrastructures of the notion of land use planning and as the means for proper decision making, the role of organizations and institutions involved with production of spatial information is quite clear. Through misuse of the land and incorrect management and because of long duration of revive and rebuild of land, the world is faced with a great crisis of decrease in natural resources in addition to increase in population and pollution crises.

At the present era that human activities have involved all economic subdivisions, there is no doubt that application of a kind of wisdom in development is quite essential. This wisdom results in planning. A planning which considers development actually through overall conservation of environment and through prevention from ecological destruction and which considers and involves the refining and renovation of the environment in its assessments. Recognizing the available potentials of the country leading to identification of resources will help us to compile and arrange successful scientific programs.

Materials and Methods
At the end of 1970s, people appeared the most destructive behavior facing with environment. The gulf war in the middle east imposed a lot of destructive effects on the environment of countries. When the oil wells of Kuwait was targeted by Iraqi forces, huge thick clouds covered about 500000 km2 of the sky of Iran, causing acid rain from the north to the east of the country. Gulf war caused health problems for about 12 million people of Iran, destructed 5 million hectares of agricultural lands, 8 million hectares of forests and 8.5 million hectares of pastures and vanished numerous fauna and flora species vanished (National Report of Iran, 1992). In recent years floods, pollution in large cities, extinction of a vast part of forests, uncontrolled growth of cities and desertification are some examples of disturbance in the state of the environment. The process of destruction in different dimensions has many reasons, but we can find the major one in unreasonable use of the land.

The metal resources such as Nickel, Copper, Zinc, Plumb will be respectively ended up after 55,36,25,21 years and each minute 5.6 hectares of forests of the world are destroyed ( Environment Organization of Iran, 2001). Land is a limited and vulnerable resource but if its capacities to be utilized constantly and not entirely, it can be eternal and renewable and to find solution for this, it needs more carefulness and attention to the past, present and future of the subject. Inattentive use of the land together with incorrect management or improper and unwise application of the land by human have also increased the problem. Today we should preserve the nature and use the potentials of the land reasonably. The land use must be in accordance with the potentialities of the land and should arrange and meet our social and economic requirements according to it. This conception became the introduction to land use planning and by this the economic basis of the expansionist concept which knew the economy separated from nature converted to the economy of sustainable environment which knows the whole economy as a comprehensive and inseparable subdivision of the nature.

Land use planning considers the constant profitability of the land according to qualitative and quantitative potentialities of the land for the use of human beings and prevents squandering of the resources and misuse of the environment. In Figure 1, the process of preparation and compilation of projects with and without considering the land use planning procedures is illustrated.

– Identification of resources and available potentials

It is considerable that the evolutionary process of resource identification is so that each step is a prerequisite to the next step. From environmental planning point of view, resource identification is the first step in national planning and assessment or land use planning. Although there are different methods for it in different countries of the world but there is no doubt that arranging comprehensive scientific plans according to the land potentialities and their accordance with the overall social and economic requirements of the society is based on a proper and accurate identification of the resources.

Fig 1: Process of Plan Compilation Without a Land Use Planning Approach

Fig 2: Process of Plan Compilation With a Land Use Planning Approach 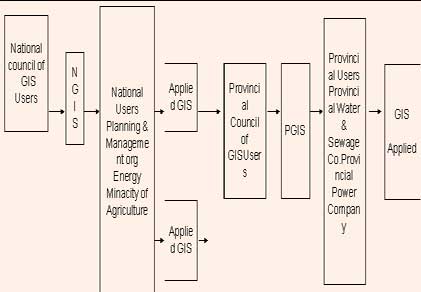