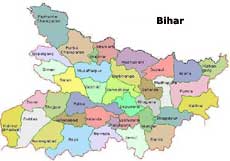 Located in the eastern part of India with the Himalayan Kingdom of Nepal to its north and the states of Jharkhand, West Bengal, Uttar Pradesh and Chhattisgarh flanking its sides, Bihar is today home of more than 90 million Indians. Nearly 15 years after India’s economic reforms, one of the country’s poorest states, Bihar is finally gearing itself to catch up with the rest of India. Moreover, the state’s decision making bodies are showing reliance over state-of-the-art geospatial technology. A slew of fiscal and legislative reforms implemented in the recent past stand testimony to this silent transformation taking place in the state. Image: Forbes
The biggest challenge and geospatial footprint
Bihar is India’s most flood-prone state, with 76 per cent of population (in the north Bihar) living under the recurring threat of flood devastation. About 68,800 sq km out of the total geographical area of 94,160 sq km, comprising 73.06 per cent, is flood affected. It was indeed the biggest challenge for the Bihar government. Hence, on January 18, 2006, the state government and the World Bank agreed on a water sector partnership matrix and action plan in three time horizons. In the short term, it was proposed that the technical and institutional capacity of the state be improved for flood management, thus introducing an extensive use of modern information technologies, developing and implementing a comprehensive Flood Management Information System (FMIS) in priority areas.

Sanjay Kumar, Chief Consultant, FMIS, explained, “The key problem with the flood mitigation effort was that instead of having a holistic view about the flood situation, an engineer was only aware about the condition in a particular area. However, the need was to analyse the complete river flow which is possible by using satellite imagery.” He added, “Using geospatial technology, FMIS analysed shift in Kosi River (which is also known as ‘Sorrow of Bihar’) during 1976-78. This work was so successful that under anti-erosion scheme of the Central water commission (GMCC), it has now become compulsory for organisations to show the migration patterns of river over the past five years.” Kumar further claims that FMIS brought geospatial technology at the forefront in the state.

Urban development
The rapid growth rate of the state has resulted into the expansion of unplanned urban areas. Hence, there is a demand for a futuristic Town and Country Planning Bill, said a GIS Coordinator of Urban Technical Assistance Support Team, on anonymity. He added that Centre for Environment Planning and Technology (CEPT)’s urban planner and urban management consultants are preparing Bihar’s first Town and Country Planning Bill. The legislation, once approved, will guide planned urban development in the state.

According to reports, the proposed legislation is part of the ‘Spur Programme for Urban Reforms in Bihar’. It is a joint project of the Government of India (GOI), Bihar state government and the UK government’s Department of International Development (DFID). As Bihar is the birthplace of Buddhism, it has famous monuments. The proposed Act will also include norms for conservation of these monuments. In addition, it will lay down procedures for different types of development plans, building and planning norms, rules for land use plan and open space plan as well as for housing for the poor.

In addition, the Coordinator informed that Bihar state’s urban development department (UDD) is considering preparing a detailed map of the entire urban property. Approximately 26 cities in the state have been selected for satellite mapping.

Agriculture is the key to the overall development of the state economy. 81 per cent of workforce is engaged in agro-activities and generating nearly 42 per cent of the State Domestic Product which is quite higher than the national average, according to a report published on the state government’s website. A senior official of BAIF Development Research Foundation, Bihar, stated that nowadays, state-of-the-art geospatial technology is being used in all agro activities like husbandry, dairy, sericulture, horticulture and so on.

Forest management
“Only 6.8 percent of the total area of the state is covered by forests in the state. Offiocially, that amounts to 6,473 sq km. However, satellite images have revealed that areas under forest cover constitute about 6,804 square km. There are 55 forest divisions in the state. The key task of the forest department is to increase the number of animals in forests,” said Hemkant Roy from Forest Department. He further said that the department has collaborated with Madhya Pradesh State Forest Department which is one of the pioneer organisations in the country to have used geospatial technology in forest management. The partnership will aid the Bihar Forest Department in demarcating forest boundaries using GPS. In addition, the department also plans to digitise all forest maps.

Status of R-APDRP
Restructured Accelerated Power Development and Reforms Program (RAPDRP), GOI’s initiative, has been awarded to Spanco Ltd. in the state. P K Singh, Nodal officer – RAPDRP, Bihar Electricity Board, said that under Part A of the programme, Bihar was funded INR 250 crore for IT upgradation. INR 200 crore has been sanctioned for Part B of the programme which includes upgradation of sub stations, etc. He added that the main data centre will be set up in Patna and a back-up will be built in Gaya. The core objective of the programme is to deal with distribution loss.

SoI activities in Bihar
Survey of India (SOI) recently produced maps at 1:2000 and 1:10000 scale for five cities of Bihar. In addition, SoI is mapping the entire country at 1:10000 scale which will also cover Bihar.

Conclusion
The challenge of development in Bihar is enormous due to persistent poverty, complex social stratification and unsatisfactory infrastructure. But the government is determined to change the scenario. It is incorporating technology to help better its services. The most prominent example is FMIS enhanced flood management system. Given the way the government is encouraging geospatial practices in the state, it is likely that the state will soon have many geospatial success stories to share with the world.