The sixth edition of annual conferencecum- exhibition, Geointelligence Asia 2012, was held in New Delhi, India, recently. Prominent defence experts and technocrats from India and abroad attended the conference to discuss the need to build a credible geointelligence infrastructure for defence and internal security. Some of the topics discussed during the two-day event were:

Changing nature of warfare
“Technology is changing the nature of wars,” said Shankar Agrawal, Additional Secretary, Ministry of Defence, Government of India, adding, “Due to advancement in IT and migration towards C4ISR (Command, Control, Communications and Computers, Intelligence, Surveillance and Reconnaissance) structures, future wars will be fought on digitised battle zones.” He then explained the importance of geospatial intelligence (geoint) in laying the critical foundation of this warfare, especially in the context of India.

Data sharing
“Lack of a mechanism to share data is a major problem among the agencies involved in counterinsurgency operations. If this problem is resolved, it can improve the capabilities of Forces involved in these operations effectively,” said Lt Gen Anil Chait, GOC-in-C, HQ Central Command, Indian Army. He then presented some examples where geoint played an effective role like Op Gerinomo.

“There are too many problems faced by people when there’s no interoperability. Inability to share information, and difficulty in rapidly mobilising new capabilities are some of the problems,” said Mark Reichardt, President, Open Geospatial Consortium, USA. Talking about the advantages of open standards, he said, “Standards are like parachutes. They work best when they are open.”

Brig AS Nagra (retd), spoke about the importance of seamless collaboration in today’s world. Talking about the impediments in collaborative engagements, he stressed upon the need to develop interoperability capabilities among all the three forces – Indian Army, Indian Air Force and Indian Navy.

Bryn Fosburgh, Sector President, Emerging Economies, Trimble Navigation, USA, raised an interesting point when he said, “Not only data but industries should also be interoperable.” Multi-intelligence fusion
Derek Ireson, Vice President, Defense & Intelligence Solutions Intergraph, USA, spoke about the need to have multi-intelligence data fusion and described data volume, speed and mobility and social media/ threat as some of the major intelligence challenges before the security agencies.

Big data
Speaking about the importance of data for an efficient geospatial setup, Dr R Ramachandran, Centre Director, National Technical Research Organisation (NTRO), said that most of the data is unstructured and available in large volumes. Making sense of this data is a challenge. One can overcome this challenge by processing the data and using metadata based preliminary analysis. He further observed that in today’s world, there is a need to create content that can be used by an end user. Ensuring security of this vital data is also a top priority. Maritime security
“If we want to prevent the repetition of 26/11 attacks in India, there’s a need to develop solutions for tracking of smaller vessels,” said SS Yadav, Director Mumbai, Lighthouse and Lightships, Ministry of Shipping, Government of India. He talked about how AIS (Automatic Identification System) is helping track vessels in ocean and spoke in-length about India’s National AIS.

“To augment the Maritime Situational Awareness and Coastal surveillance infrastructure, Centre of Artificial Intelligence and Robotics (CAIR) has developed MDA system for Indian Navy. It is also developing Coastal Surveillance and Decision Support System (CSDSS) as part of Integrated Coastal Surveillance System (ICSS),” said Vinay Agarwal, Scientist D, CAIR, India. Explaining the role of GIS in these systems, he said, “GIS is a crucial component of any maritime system (MDA and CSDSS) since it enables the user to view the COP, assess the current operational scenario, grasp the situation and quickly act upon it.” 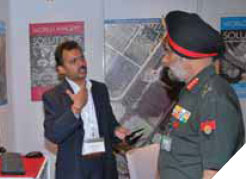 “Defence operational systems cannot be connected on public networks, geospatial data goes beyond imagery and maps and much beyond what’s available in the public domain,” said Col Sunil Mishra, Director – BMS, DGIS, Indian Army. Talking about challenges, he described policy and security paranoia as major challenges before security establishments. “We are talking about cloud nowadays but we do not have connectivity in combat zones. There’s also a vast disparity in communication infrastructure at HQs and in combat zones,” he said.

Narayan Panigarhi, Scientist F, CAIR, India, proposed creation of Indigenous GIS (INDIGIS). “Major challenge in the design of a GIS lies in identification of appropriate algorithms. There are a plethora of well researched algorithms in the field of geodesy, cartography, image processing etc. The challenge is to identify the appropriate algorithm for the spatiotemporal problem and make a robust implementation of algorithms. The answer to the spatiotemporal problem can be from any segment of GIS such as visualisation, computation, measurement, simulation, etc,” he said. 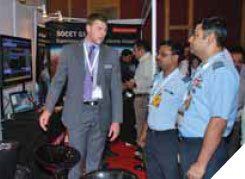 Human Terrain Analysis (HTA) and Cloud are emerging as two fields increasingly gaining popularity among the defence forces. “The objective of human terrain mapping is to provide local commanders and staff with an understanding of local population,” said Sanjay Agarwalla, Chief Executive Officer, Integrated Digital Systems, India, who spoke about the importance of sociocultural awareness. Talking about the challenges of human terrain mapping, especially in India, he said, “India poses several challenges in this field given its diversity.”

ArcGIS is now a complete cloud enabled platform empowered with capabilities so that GIS and image processing can work together as a single solution for advanced intelligence analysis. This was highlighted by Kurt Schwoppe, Federal Sales Manager for Imagery Solutions, Esri, USA. Meanwhile, talking about the advantages of Cloud, Ashish Arora, Asst Manager – Enterprise Solutions (Security, Government and Infrastructure), Intergraph, India, said that desktop or web mapping applications are unable to meet all the requirements of its users. “A SMART GIS is the perfect GIS to connect and equip all users with the power of geography,” he said. Conclusion
“Geospatial technology revolution will continue at a faster pace in future. Geospatial lies at the core of all future wars. For a successful fusion of geotech, geospatial data need to be clubbed with other forms of intelligence,” said Lt Gen K Surendra Nath, GOC-in-C, Army Training Command (ARTRAC), adding, “In the next 10 years, we are likely to witness a scenario where all smart phones will be embedded with 3D technology. There’s a need to develop smart use of technology in geospatial domain.”

The theme of this year’s event was “Building a credible geointelligence infrastructure for defence and internal security.” The conference was organised by Geospatial Media and Communications in collaboration with ISSA, SASE, DTRL, CAIR, DEAL (Knowledge partners) and CRPF and ITBPF (supporting organisation). 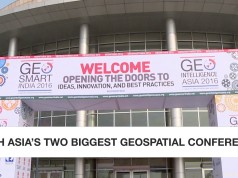 GeoInt Asia to showcase the impact of geotech on modern warfare