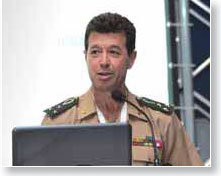 Brazil – Organisation for GIS
In the inaugural session, a comprehensive overview of the Department of Science and Technology, Ministry of Defence, was given by Lt Gen Eng Mil Joao Edison Minnicelli, Vice Chief of the Department. The department caters to the science and technology requirements of all the three defence services. He described the nine entities functioning under this department, four located in Rio de Janerio and five in Brasilia, giving out their charter and development work being undertaken.

Lt Gen Mario Lucio Alves de Araujo, third Deputy Chief of Staff of the Army, Brazil, spoke about the doctrine for geointelligence for land forces. He talked about the existing situation, the essential requirements and the challenges faced in the application of geointelligence. He gave a brief description of some strategic projects in Brazil incorporating GIS- SISFRON (System for Integrated Monitoring of Frontiers), Project Protect (System for Integrated Protection of Strategic Land Structures) and Air Defence System. He informed the audience that a great deal of emphasis was being laid on GIS in all training institutions of Brazil Army.

The Board of Geographic Service (DSG) of the Brazilian Army is one of the bodies responsible for the systematic mapping of Brazil. Gen Pedro Ronal Vieira who heads the DSG, spoke about how his organisation has for over a century participated in all actions related to the mapping of Brazil, contributing in the formulation of policies and crafting topographical maps of the entire national territory. It has also participated actively in the implementation of the National Data Infrastructure (INDE) and ensured the dissemination of geospatial data through the Army Geographical Database (BDGEx). Col Wilson Stefano Junior, Head of Technology and Intelligence Section, Joint Staff of the Armed Forces (EMCFA), Brazil, spoke about the geointelligence doctrine for defence. He described the role and objectives of his organisation and explained the policy framework. The charter included mitigation and assistance in providing relief during natural disasters. He gave the example of work done during the floods in Rio de Janerio in January 2012. He mentioned about Brazil’s participation in the International Chapter on Space and Natural Disasters.

Cyber defence
Lt Gen Jose Carlos Santos, Head of the Cyber Defence Centre of the Army, Brazil, spoke about cyber warfare. He gave a historical perspective citing cyber actions in Estonia, Syria, Georgia and Iran. He said that Brazil is extremely concerned about the threat of cyber attacks and explained about the organisation being planned for conducting cyber warfare by the Brazil Army, which would include monitoring of social networks. He also spoke in length about the special organisation which was created to monitor and respond to cyber threats during the Rio + 20 summit. Similar exercise would be required when the World Cup Football (2014) and Olympics are held in Rio (2016), he said.

Protecting environment and combating crime
Federal Police in Brazil is using unarmed aerial vehicles for gathering geographic information from remote and inaccessible areas in the Amazon region. This was extremely helpful in ensuring protection of the environment and in combating crime, particularly drug trafficking. Frederico Novaes from the Integrated Center for Police Intelligence and Strategic Analysis explained the utlisation of technologies for gathering intelligence. He demonstrated one such successful mission with the help of a video clip. The organisation plans to considerably enhance these facilities in future.

Cloud enabled GIS
A detailed exposition of cloud enabled computing was given by John Day, Director of Defence Business Development, Esri, USA. He stated that GIS capabilities are rapidly evolving in the cloud, be it for defence and security, public utilities, telecommunications, health care, natural resources or environment monitoring and management. There are issues regarding security, interoperability and portability, but these are being addressed, he added.

Airport mapping
It is essential to have airports mapped for a variety of applications, both civil and military. Tata Lacale, Senior Manager Sales, GeoEye, Brazil, explained the utility of 3D airport mapping both terrain and obstacle, for the defence, state department, utility services, aviation authorities and friendly air forces. With only 25 per cent of the world’s 14,000 airports having been mapped, this requires enormous effort and investment. The task can be accomplished in about five years with sophisticated equipment that is now available, he said.

Conclusion
Over 700 delegates representing 20 countries attended this two day conference. Language was not a barrier with real-time translation facilities provided. An exhibition was organised concurrently which showcased the geospatial technologies available and provided stakeholders an excellent opportunity to discuss problems and solutions. 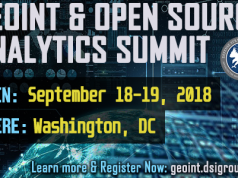 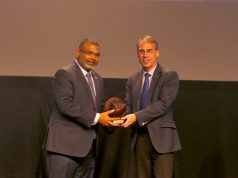 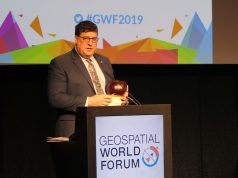