GeoEye-1 will be a mapping machine in orbit

Q. Tell us something about GeoEye 1.

When launched in September, GeoEye-1 will be the best commercial satellite in the world. It will have a black and white or panchromatic ground resolution of 0.41 cm. Because of US licensing restrictions, we will be selling it to commercial customers at half meter ground resolution. We will be able to merge the colour from the multispectral sensor with the sharpness and clarity of the panchromatic sensor and get colour imagery at this highest resolution.
So, it will give our customers the best resolution from any commercial satellite available in the world, plus it has the highest accuracy than any other commercial satellite available. The accuracy will be 3 meters without any ground control points, which we believe is remarkable. Geo- Eye-1 will be a mapping machine in orbit. The reason we could do that is GeoEye-1 has components that were previously restricted to be used in classified missions for the US government. For example, our star-trackers have never flown on a commercial satellite before. So we have state-of the art technology. Together with IKONOS, GeoEye-1 will collect almost 1 million sq km. a day.

Q. What kind of markets are you looking for Geo- Eye’s products?

About 50% of GeoEye-1 was financed by the US government. The National Geospatial- Intelligence Agency paid half of the development cost of building the satellite, so we have promised to give them at least half of the imaging capacity for the first year-andhalf years of operations. They have signed a contract to buy $ 198 million worth of imagery for 18 months after the satellite becomes operational, though we have already met some of their requirements under this contract in advance with IKONOS imagery. The balance of the imaging time on the satellite will be for existing customers that we have around the world and of course we will have ample capacity to build an archive. We already have a number of ground station customers for IKONOS imagery around the world and many of these customers would like access to GeoEye-1. In addition to that, we have to look for new markets; India and China are important customers.

The economic and population growth in India and China have been dramatic. India alone covers some 3.2 million square kilometers, and is growing so fast that as even governments plan urban development, more development is needed; as they plan telecom lines more are needed; as officials plan new roads more are needed and as new will be a mapping machine in orbit On the eve of the launch of GeoEye-1, President Matt O’Conell details his company’s new strategies to market its product and deliver data efficiently energy distribution systems are planned — more need props up. There will be an increasing use of high resolution satellite imagery to better map, manage and monitor these high-growth countries. Another important market is the online mapping business. It is not only becoming an important customer by itself, it is also generating awareness of the value of our technology among new customers. People have now started planning the use of imagery for agriculture, water resources management, highways, etc. 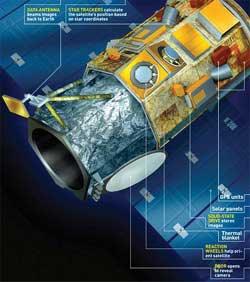 Presently, we currently supply IKONOS imagery to Microsoft Virtual Earth, Yahoo and Google Earth. We have been approached by all the online players for access to GeoEye- 1 products because of its accuracy and colour.

For data delivery, we are looking at certain new models. Presently, IKONOS can download directly to ground stations. For GeoEye-1, we will continue download directly for the customers who want to have direct access to the satellite. Many governments prefer that method since it is fast and secure. For commercial users, we will supply imagery via electronic delivery or hard drives or DVDs, etc. We will also be introducing Web capabilities. We now have a search and discovery tool called GeoFUSE that enables people to search our archive very easily. We are not aiming at the general consumer market. We are basically a B2B company, so I don’t think you will see GeoEye selling directly to customers through Web. That is not our goal. Our goal is to work with businesses and help them directly rather than individuals. So, for example, if someone in Asia requires imagery, we will deliver imagery via CDs or electronic means. We have already applied for license to sell our products in India and look forward to doing business there.

Q. How do you view the debate over aerial photography Vs satellite remote sensing?

We see both as complementary. We bought an aerial photography company from General Electric last year and now we can provide customers with access to aerial or satellite imagery. It’s working well.

They specialise in pipeline modelling for oil and gas companies or power-line right of ways for telecom companies. It is cost-effective for an oil company to lay pipelines based on the precise information gained fromaerial photographs. And after that to monitor the pipeline using cost-effective satellite imagery. We are developing more and more products and services for people. Our goals are not only to produce the best pixels, but turn those pixels into products or services that help our customers solve challenging problems.

Rural areas require high resolution images/magazines/2008/sept for detailed planning including land-use planning. It is complementary to working with low resolution satellites. For example, we cooperate with SPOT and other satellite companies. Remember our goal is to help customers solve challenging problems, so we have the flexibility to acquire imagery from other sources to meet that end. But I still feel that if you really want to do things like management of soil erosion or monitor roads or watch for illegal logging, then high resolution imagery is the best alternative.