Introduction
Coast is a unique environment in which atmosphere, hydrosphere and lithosphere contact with each other. Coastal zone monitoring is an important task in national development and environmental protection. For coastal zone monitoring, coastline extraction in various times is a fundamental work. Coastline is defined as the line of contact between land and a body of water. Coastline is one of the most important linear features on the earth’s surface. Coastlines have a dynamic nature therefore coastal zone management requires the information about coastline.

Nowadays remote sensing technology plays a unique role for data acquisition as an economical method. Optical images have advantages such as easier interpretation and easier availability. Furthermore, absorption of infrared by water and its strong reflectance by vegetation and soil make an ideal combination for mapping the spatial distribution of land and water. These characteristics of water, vegetation and soil cause that, the images contain visible and infrared bands widely have used for coastline mapping, such as TM and ETM+ imagery.

History
From 1807 to 1927, all coastline maps provided with ground surveying. In 1927 the full potential of aerial photography to complement the coastline maps was recognized. From 1927 to 1980, aerial photographs were made the sole source for coastal mapping. However, the number of aerial photographs required for coastline mapping, even at a regional scale is large. The cost of collecting, rectifying, analyzing and transferring the information from photographs to map is prohibitive and long-time. In addition to cost, using black and white photographs creates several other problems. First, the contrast between the land and water in the spectral range of panchromatic photographs is minimal, particularly for the turbid or muddy water of coastal region, and the interpretation of the coastline is difficult. Second the photographs and the resultant maps are in a non-digital format, reducing the versatility of the data set. Labor intensive digitization is required to transfer the information to a digital format, and this process introduces additional costs and errors. The geometric complexity and fragmented patterns of coastlines compounds these problems. In addition to the above, White et al. (1993) indicated other possible limitations: (1) the lack of timely coverage, (2) the lack of geometrical accuracy unless ortho-rectified, (3) the expense of the analytical equipment, (4) the intensive nature of the procedure, and (5) the need for skilled personnel (White et al. 1993). In addition to high costs and difficulties, generation of coastline maps has fallen sadly out of date. From 1972 the Landsat and other remote sensing satellites provide digital imagery in infrared spectral bands where the land-water interface is well defined. Thence remote sensing imagery and image processing techniques provide a possible solution to some of the problems of generating and updating the coastline maps.

Study site
The study site of this investigation is Urmia Lake. This lake is located between latitude 37°N to 38.5°N and longitude 45°E to 46°E. Urmia Lake is the 20th large lake and the second hypersaline lake in the world. The Urmia Lake covers an area average of 5,100 square kilometers. The maximum depth and average depth of this lake respectively are 16 and 5 meters. Urmia Lake is listed as a biosphere reserve by UNESCO. Also, it is a national park in the national level.

Methodology
Various methods for coastline extraction from optical imagery have been used. We can extract the coastline even with single band, because the reflectance of water is nearly equal to zero in reflective infrared bands, and reflectance of absolute majority of landcovers is greater than water, for example, by histogram thresholding on one of the infrared bands of TM or ETM+ imagery. Experience has shown that of the six reflective TM bands, mid-infrared band 5 is the best for extracting the land-water interface. Band 5 exhibits a strong contrast between land and water features due to the high degree of absorption of mid-infrared energy by water (even turbid water) and strong reflectance of mid-infrared by vegetation and natural features in this range. Of the three TM infrared bands, band 5 consistently comprises the best spectral balance of land to water.

The dynamic and complex land-water interaction in coastal Urmia Lake wetlands makes the discrimination of land-water features less certain, especially in marsh environments. The histogram of TM band 5 ordinarily displays a sharp double peaked curve, due to tiny reflectance and high reflectance of vegetation in this band. The transition zone between land and water resides between the peaks. The transition zone is the effect of mixed pixels and moisture regimes between land and water. If the reflectance values are sliced to two discrete zones, they can be depicted water (low values) and land (higher values). But the difficulty of this method is to find the exact value. Because any threshold value will be exact on some area, not on all area. Another method is utilizing the band ratio between band 4 and band 2 and also, between band 5 and band 2. With this method we can separate directly water from land.

The ratio b2/b5 is greater than one for water and less than one for land in large area of coastal zone. ERMAPPER software uses this ratio as algorithm for separating water from land from TM or ETM+ imagery. This law is exact in coastal zones covered by vegetation, but not in land without vegetative cover. Actually, this law mistakenly signs some of the non-vegetative lands to water. 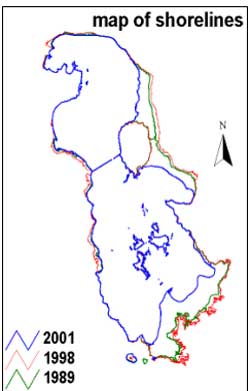 Next we compared two mentioned coastlines. With this comparison, the accuracy of the extracted coastline from this approach was evaluated 1.3 pixels (pixel size=30meters).

Figures 2, 3 and 4 illustrate mosaicked images of Urmia Lake in 1989, 1998 and 2001 years respectively. These images are color composite RGB 543. Figure 5 illustrates the coastline change map for this lake.

Figure 5 illustrate that the area of Urmia Lake in 1998 and 2001 respectively equaled to 5650 and 4610 square kilometers. Therefore area of this lake has been decreased approximately 1040 square kilometers from Aug-1998 to Aug-2001.