Integration methods for data and models have been mainly developed for continuous variables in meteorology and oceanography such as temperature and precipitation. For categorized or class variables such as land use types, there are only very primitive interpolation methods such as nearest neighbor interpolation and so forth. This paper, propose a integration methods of models and class data from multi-sources under the framework of optimization of likelihood of spatio-temporal events. For optimizing the likelihood, genetic algorithm (GA) is modified by combining GA with classical “Hill climbing” method. .

2.1 Introduction of Genetic Algorithm (GA)
John Holland and his colleagues develop genetic algorithms as an approach to optimization, which requires efficient and effective search in natural and artificial systems. They are search algorithms based on the mechanism of natural selection and evolution of natural genetics. They combine survival of the fittest among string structures with a structured but randomized gene exchange to form a search algorithm with some of innovative flair of human search.

Genetic algorithms are computationally simple and powerful in their search without restrictive assumptions about search spaces. In a simple genetic algorithm, five basic aspects should be considered: the representation or coding of problem, the initialization of population, the definition of evaluation function, the definition of genetic operators, and the determination of parameters.

2.2 Optimization Scheme for Class Variable Interpolation
Most natural properties may vary continuously. However, the observation that describe these, properties and which form the data bases of GISs are usually fragmentary. Ever where a complete cover of information exists, for instance from the satellite images, we still often need to resample because there are too many data to handle or analyze in any reasonable time. Because the properties are continuous that values in sites are close together in space are more likely to be similar than those further from one another, i.e., they depend on one another in a statistical sense. This important feature of spatial data provides the rationale for interpolation.

3.3.1 Spatio-temporal Behavioral Models/Rules of Class Variable Data
It should be noted that any types of behavioral/structural models/rules can be used for the GA-based interpolation if they can determine the probability of every possible behavior/transition of class variables. In class variable data, the possible changes of a class at one pixel are basically defined by the probability of the changes from one class to another. One of the simplest example is a Markov chain, where only the previous class determines transitional probability. In addition the probability also can be affected by combination of classes in the neighborhood. In this study, we assume the transitional probability is determined by the combination of classes in the neighborhood. And land use data with five classes is used as test data.

The spatial and temporal relations affect the transitional probability in three ways as shown in the Figure.2. The first is so-called the spatial continuity, which is based on the assumption that the same class data tends to continue in spatial dimension. Therefore, the effects of the spatial relation happen just within the same time-slice data. Second one is called temporal continuity. This is an extension of spatial continuity to temporal domain- the third aspect is expansion-contraction relation based on the assumption that some class data has high possibility to expand its area at next time-slice, while others tend to contract. The pixel’s class itself will determine the temporal change in the pixel with un-contractible class type. And class of the pixel and classes of its expandable neighborhood will determine the temporal land use change in the pixel with contractible type.

Figure 3 Possible Class Change in 3D Spatio-temporal Space
Figure.3 shows possible class change in spatio-temporal space. Let define PTC(C*0,C.) as the probability of class change from class C*o to class C. by temporal continuity under the effect of expansion- contraction within C*o, ‘s neighborhood and psc (C*o ~ C.) as the probability of class change by spatial continuity. If it is assumed that PTC(C*o, C.) and Psc(C.o -C.) are independent, we can compute behavioral fitness of each individual according to following formula:

where Np is the pixel number
NT : is the temporal slice number,
CP, T : is the land use class of the cell on the Pth pixel at the T time slice;

3.4.1 Reproduction
Reproduction is a process in which individual strings are copied according to their objective function values or the fitness values. Copying strings according to their fitness values means that strings with a higher value have a higher probability of contributing one or more offspring in the next generation(Figure.4). This operators, realizing an artificial version of natural selection, a Darwinian survival of the fittest among string creatures.

3.4.2 Crossover
Crossover operator first randomly mates newly reproduced individuals in the mating pool. Then it randomly locates a Window with random size for a pair of individuals. Finally, the contents of individuals within the window are swapped to create new individuals (Figure.5).

Figure.5 Crossover of Individuals
3.4.3 Mutation
Mutation operator plays a secondary role in the simple GA. It occasionally alters the value in a individual position (Figure.6).

Figure.6 Mutation of One Individual


4. Improvement of the Search in Genetic Algorithms

4.1 Hill-Climbing method to improve the efficiency of genetic algorithm
Searching a complex space of problem resolutions often involves a trade-off between two apparently conflicting objectives: exploiting the best solutions currently available and robustly exploring the space. Generic algorithms have been toured as a class general purpose search strategies that strike a reasonable balance between exploration and exploitation. The power of these algorithms is derived from a very simple heuristic assumption: that the best solutions will be found in 1- regions of the search space containing relatively high proportions of good solutions. The problem is that, if the complex space of problem resolutions become larger and larger, the population size and the generation size have to be increased at same time. The efficiency of GA is one of obstacles to apply GA in reality.

4.2 Maintenance of Population Diversity
Despite the demonstrated advantages of GAs and high performance of most implementations, it still fails to live up to the high expectations engendered by the theory. The problem is that, any implementation uses a finite population or set of sample points. Estimates based on finite samples inevitably have a sample error associated with them. Repeated iterations of algorithm compound the sample error and lead to search trajectories much different from those theoretically predicted. The most serious phenomenon is the premature convergence.

The premature convergence is caused by early emergence of an individual that is better than the others in the population, although far form optimal. Copies of this structure may quickly dominate the population. Search continues then but is concentrated in the vicinity of this structure and may miss much better solutions elsewhere in the search space.

5. Experiment
The test program of GNHC for spatio-temporal interpolation of pixel based landuse data was coded with C language and was run on ARC/station. Several simple landuse class variable data had been used to test program. For the test data, only two-dimensional spatio-temporal data is shown here. The test data size of individual had been defined with 20pixels*6time-slices. The first and last time-slice in the individual was supposed to be sampled data and all middle time slices were unsampled data that needed to estimate through interpolation size processing. In these experiments, we set the generation size of GA/HC to 2000,which was large enough to get stable results. The probability of crossover operation was defined as 0.7, while the probability mutation operation was relative small in natural population, so that we used 0.01 as the Time Boundary condltlon probability of mutation. Figure.7 is one of results of GA/HC, in which the individual has largest fitness value.

Figure 7 Result of GA/HC
Figure.8 shows the comparison of several results From this figure, we can find that the larger the population size is the faster the stable result can be obtained, and the closer the stable result tend to best solution. Figure.9 is a comparison of GNHC with GA for spatio-temporal interpolation of landuse class variable data. It shows GA/HC has much higher efficiency than GA for GA spatio-temporal interpolation.

Figure 8 Comparison of GA with GA/HC 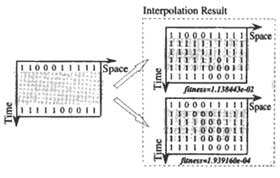 
6. Conclusion and Future Prospects
In this study, Genetic-Algorithm/Hill-Climbing was proposed as a spatio-temporal interpolation scheme for pixel based class variable data which allows integration with observational data and behavioral/ structural models/rules.