When it all started as an adventure from a dingy roof-top barsati (shelter), little did the youngsters behind it or their mentor imagine that it would be a formidable force in world geospatial media one day. The ‘it’ in this context is the eight-page newsletter, [email protected], which was born out of the sheer need for reliable information, resource material and latest developments in the realm of geospatial in India. Recounts a nostalgic Ravi Gupta, founder and the first editor, “We approached potential clients in development sector to provide software and integrated solutions but ended up educating them instead. Realisation then grew on us that geospatial market in India is immature and there is a dire need to create awareness about this technology. We then decided to take up this challenge and so [email protected] was born.”

Going down the memory lane, Dr MP Narayanan, President, GIS Development says on a nostalgic note, “I distinctly remember three youngsters walking into my house more than 12 years ago, quite excited with a proposal. While one of the three youngsters was very enthusiastic about bringing out a journal on GIS, the others were not too keen. A detailed discussion ensued and I vetoed it asking them to go ahead with bringing out, to start with, an eight-page newsletter on GIS as I saw immense potential for the technology.”

In-house efforts and support from a few generous friends saw the first 1000 copies of newsletter in June 1997. An overwhelming response from the readers and users after, the newsletter, without losing much time, quickly evolved into a bimonthly first and then into a monthly magazine. Says Ravi, “It almost feels like a dream that our ‘adventure’ became a ‘venture’ that sustained for more than 12 years to celebrate the 150th issue milestone today. This is an important and a proud moment for the founders, and I, being one of them, feel delighted.”

Baby Steps
After the first few editions, slowly things started changing and the magazine started attracting some of the best names in the GIS community as authors. Awareness apart, the initial focus of the magazine was to serve the needs of geospatial community and to educate decision makers and politicians. “Magazine became a voice of GIS and remote sensing community and a platform to raise the concerns and issues of the community in India,” says Sanjay Kumar, publisher and the person instrumental in sustaining the publication till date.

“After a couple of issues, we found that there was a need to organise workshops and conferences to create awareness about the technology and its applications,” Narayanan adds.

Conferences served as an ideal platform for this purpose which had ample opportunity to share knowledge, network and get updated. As the synergies between magazine and conferences built up, as the editors started interacting with readers and stakeholders more often, they realised that one major issue that remained as a stumbling block for the growth of geospatial industry in the industry was the restriction on maps and map data in India.

“We took the restrictive map policy issue head-on and got key stakeholders in government, civil society, scientific institutions, international map data experts to discuss and debate on the issue. Voicing the concerns of the users and raising this issue in a vigorous manner took the magazine places, including the dangerous ones. We got appreciation mail and hate mail in equal measure. Our campaign for opening of map data took the GIS, remote sensing and mapping data community by storm and earned us many empathisers who were grateful to us to have shown the courage to raise these issues. Many of our campaigns reached the top echelons of decision making in the country and eventually paved the way for opening up of maps in the country,” recalls Ravi.

Another major aspect the magazine proved a driving force in the initial years was for setting up of a national spatial database infrastructure in the country. Prof Arup Dasgupta, who was associated with the magazine from the yearly years says, “The first NSDI was organised by GIS Development. People started discussing the rationale behind sharing data. The whole idea that geospatial data should be accessible to those who want it was a major step forward.”

Resourceful Portal
The millennium years (1999-2001) saw a boom in Internet connectivity and the World Wide Web as a channel of news, source of information and a medium to connect with people around the world. GIS Development immediately saw an opportunity and www.gisdevelopment.net was launched in April 2000. The portal became a unique way to associate with geospatial community and also get their feedback. Over the years, this became one of the leading portals in geospatial domain and today it takes pride over its laurels with captivating figures – 2 million page views per month, 18 sections, 50,000 pages of information, visitors from 187 countries and the largest resource portal in the world.

Beyond the Indian shores 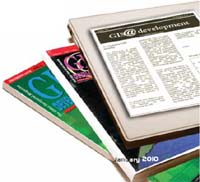 To create more value and meaning to a technology-related magazine, it was a natural progression to go beyond borders; to create a bridge between technologically advanced countries and potential developing markets by bringing in international knowledge and experience to the readers. “With the advent of Map India, Map Asia and Map Middle East conferences, we as a team gained lot of insight into the GIS applications and research happening in several other parts of the world; enhanced our understanding of the challenges and opportunities in other parts of the world. This understanding went into the magazine and helped us address global issues. This also helped develop several linkages between Indian and overseas geospatial community which have flourished over the years,” opines Ravi.

Corroborating with Ravi, Prof Dasgupta, Managing Editor, says, “I look at the magazine as a window between developed and the developing world in the GIS context. All the technology comes from the West, predominantely North America and to an extent Europe. And it is being quickly adapted in India, China and in countries of South East Asia, South America and Africa. There are users on the one side and technology developers on the other. One cannot do without the other. The developed nations have reached a level of saturation in terms of new things to be done. But there is a lot to be done in this part of the world. GIS Development clearly fits in here. We position ourselves as a global magazine published from India.”

As the magazine gained global colour, it started picking up and advocating issues of universal importance and did not limit itself to regional and country-specific policy issues. Access to geospatial data, standards, spatial data infrastructures, technology trends, applications and scores of other issues started finding place in the magazine. Maneesh Prasad spearheaded the global cause as the Managing Editor which was subsequently being ably handled by Prof Dasgupta who vouches by his job. “People don’t know enough about what is happening in the rest of the world. We are connecting them to other parts of the world and helping them expand their horizons. I feel this is a unique magazine. Others might do similar work but they tend to be region centric – Europe, US, etc. We are spread out,” he says emphatically.

He continues, “Our role is to bring out the essential pros and cons of any issue without taking sides. We show to the people what is new in the technology, prospects of that technology in terms of application, in what way the technology and application can have impact on future policies and so forth. We are proactive but not active.”

Hand in glove with technology and application, the magazine, slowly but surely, started presenting the concerns and representing the geospatial market and industry. “Today, GIS Developmentis more about being the voice of global geospatial community, serving as a tool of business development and offering business direction,” pronounces Sanjay.

“I look back with satisfaction, at the dedicated roles played in the earlier stages by my colleagues which resulted in GIS Developmentbecoming Asia`s largest circulated GIS monthly. Our strength, apart from management was also in building a dedicated team of highly qualified youngsters who work with commitment and enthusiasm,” applauds Narayanan.

Miles to go..
In the business of providing knowledge information, complacency is a crime. Knowing this well, GIS Development has its sight firmly perched on distant frontiers. “The magazine already has a high recall and created great awareness. With new areas like South America opening up, we are confident this tempo would sustain,” announces Prof Dasgupta. Catching up with the changing times, GIS Development is upbeat it can act up to the anticipation of the stakeholders. “The next 150 editions would of course be very much different from last 150! The geospatial arena is changing very fast. So are readers’ aspirations from the magazine. We would live up to their expectations,” Ravi Gupta exudes confidence.

Voicing similar sentiments Dr MP Narayanan concludes, “I am confident GIS Development would soar to greater heights and be a sine-quo-nonin geospatial sector.”