In general, forest is a large uncultivated tract of land covered with trees and underwood, woody grooves and rude pasture.

Forests have acquired increasing importance in the recent past for their role not only in meeting the material requirements but also for their effects on hydrological cycle, floods, soil erosion and water pollution, etc. Himalayas are rich in forest and with increasing human pressure, advancement in the agriculture and other sectors and rapid urbanisation, dependence of people on the forest, these forests have been degraded and fragmented to great extent. Deforestation may result in rapid positive environment feed backs because of the large energies inherent in the climatic system.

Forest plays a vital role in nature by moderating the extremes of climatic conditions, preventing soil erosion and regulating the flow of streams. Forests affect the hydrological cycle considerably. Stebbing (1952) observed “the entire philosophy of the role of forests is to prolong the water cycle from its inception as falling precipitation to the final disposal as runoff into streams and oceans. The longer the water is retained on the land, the greater is its usefulness in nurturing crops and trees, in maintaining the regular supply of water in streams and in preventing soil from washing away”. Precipitation without forests is rapidly disposed off by surface runoff. In forests, it is retained in the soil and gradually utilised for the growth of trees and crops and for maintaining a steady and sustained flow of water in the streams. Interception, infiltration, soil moisture storage, run-off and evapotranspiration are various hydrological parameters,which are affected by forests.

The extent of forest area on the earth is about 37.2 percent of the total geographical area. The area reported as forest in India is only about 75.1 million ha i.e. 22.3 per cent of the geographical area. This means that the extent of forest area in our country is much less compared to other countries of the world (FAO, 1982). Though the recorded forest area in the country is more than 75.0 million ha but the actual forest cover is much less. The first attempt to determine the actual forest cover in the country by using satellite data was made by National Remote Sensing Agency (NRSA) in 1984. NRSA interpreted the Landsat imagery of 1972-75 and 1980-82 and found that the forest cover has reduced from 55.51 million ha. to 46.34 million ha (NRSA, 1984).

Keeping in view the importance of forest cover in various hydrological studies, in this study an assessment of forest cover has been made in Uttaranchal State. The traditional methods of survey, mapping and monitoring of forest resources are too complicated and demand huge amount of resources and time. Remote sensing technique has emerged as one of the useful tools to study land cover features. The satellite data most commonly are being used as sources for basic information. The satellite data most commonly used as sources for basic information regarding maps are those provided by the high resolution sensors. However, for a large area the processing of high resolution data involving a number of scenes will be time consuming and cumbersome. Therefore low resolution data will be appropriate for such type of studies.

The period of satellite data is of utmost importance. The reflectance from the forest is dependent on growth of the crown and its chlorophyll contents. A deciduous forest would therefore not give proper reflectance in leafless period. Thus, data of the spring/ summer seasons for such forests is not suitable for interpretation. During the rainy season, it is difficult to find cloud free data and similar reflectance of agriculture and similar areas poses problems in delineation of forest cover during this period. Therefore, the data of rainy season is often not suitable for the assessment. The data period suitable for interpretation for most of the forest area of our country is October to January. In the absence of data of this period, data of other periods can also be used.

The Study Area and Data Availability
The study area chosen for the present work is Uttranchal State and is shown in Figure 1. Uttaranchal, a new hill State of India, carved from Uttar Pradesh has 160 million people of different castes, creeds and colours. Uttaranchal came into existence on 9th November 2000. It is situated between 28°45′ to 31°30′ N latitude and 77°30′ to 81°5′ longitude covering an area of 53, 484 sq. km. The State, which forms the north-west border area of the country, touching boundaries of Nepal and China, lies in the Central Zone of the Himalayas. The State comprises, thirteen districts in all, out of which the six-Almora, Pithoragarh, Nainital and the newly carved out districts of Bageshwar, Champawat and Udhamsingh Nagar- constitute Kumaun division and the remaining seven-Uttarkashi, Chamoli, Dehradun, Pauri Garhwal, Tehri Garhwal and the newly formed districts of Rudra Prayag and Hardwar-are components of Garhwal division. The geographical boundary of the state goes with Tibet in the north, Himachal Pradesh in the west and the north-west, Gangetic plains of U.P in the south and Nepal in the east. 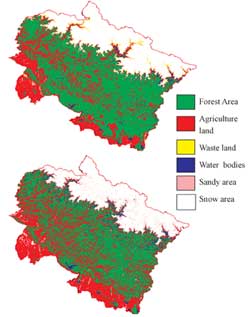 Fig. 3: Unsupervised classification for the month of April and October 1998
Remote sensing data of the area were used to prepare the landuse/landcover map. Seven scences of IRS 1C WiFS of the year 1998 for Uttaranchal were used in this study. The dates for which the data have been used are 13 January, 26 March, 19 April, 13 May, 28 October, 21 November and 15 December. The base map of the study area was prepared using Uttranchal Atlas prepared by National Atlas and Thematic Mapping Organisation (NATMO).

Methodology
In this study, digital analysis of IRS 1C-WiFS scenes was carried out for assessment of forest cover. Wide field sensor with a capability of covering large area in single instant field of view (IFOV) has been used to find out the pattern of forest cover of Uttranchal State in the year 1998. The data of IRS-1C satellite WiFS sensor for year 1998 (January, March, April, May, October, November and December) were taken on CD-ROM media. The data were processed and analysed using the ERDAS/IMAGINE 8.5 software. The data were loaded on the computer from the CD-ROM and were imported in the ERDAS system. Each scene had 2500 rows, 2520 columns and the information of two bands. Initially, a false colour composite (FCC) of 2, 1 and 1 Bands combination was prepared and visualised.

While using the temporal satellite data of the same area, it is required to register the images to base map. Seven images were registered with this base map. For carrying out registration, some clearly identifiable Ground Control Points (GCPs) like crossing of rivers, canals, sharp turns in the rivers and dams etc were located on both the images. Ten GCPs were selected for geo-referencing in all the cases. A polynomial transformation of first order was performed and resampling was done using the nearest neighbour interpolation method. While looking at the statistics, some points, which generated big errors, were deleted and replaced by other points so as to obtain satisfactory registration. In this manner, the available images were registered with respect to base map. After completing this process, different images were displayed one over the other and the superimposition was compared. The registration of the images was found to be satisfactory. There are several techniques which can be used to discriminate forest cover such as Normalised Vegetation Difference Index (NDVI), unsupervised Classification, supervised classification etc. In this study, Normalised Difference Vegetation Index (NDVI) and unsupervised classification both the techniques, are used to discriminate the forest cover area. Normalised Difference Vegetation Index is sensitive to the presence of green vegetation (Sellers, 1985) and has been successfully used in numerous regional and global applications for studying the state of vegetation. Forest cover estimation was done by comparing the NDVI values of forest pixels for different date’s data. NDVI was calculated as
NDVI=NIR – R/NIR+ R
Where NIR and R are uncorrected reflectance values Near Infra Red and Red wavelength regions respectively.

For April 1998 (pre-monsoon) and October 1998 (post-monsoon) land use/cover were obtained through unsupervised classification. Unsupervised classification is also called clustering because it is based on natural grouping of pixels in the input or image data. In this technique total number of 20 classes were taken for classification. These classes were assigned to different land use class on the basis of interpretation of the results. The total area was broadly classified in four classes, namely, forest cover, snow cover, vegetative land and sandy land.

The classfied NDVI images for these months are shown in Figure 2. It is noted that in the months of January, April and May the range of NDVI values are more or less the same. While in the months of October and November this range is higher. Also, the spatial distribution of NDVI values has been dominated by the high values in October and November. It shows the influence of monsoon in the month of October. In this month the NDVI values are higher which is shown in the class of above 0.5. This class occupies the major portion in the month of October. The unsupervised classification on the NDVI images is applied to estimate the forest cover area. The forest cover areas obtained for two months obtained are 27812.3 and 27131.32 km2 for April and October. In percentage it comes out to 52.4% and 51.2 % for April and October respectively. The forest cover area obtained using this technique averaged 52%.

The unsupervised classifciation of satellite data was also performed. The results of unsupervised classification for the months of April and Oct. are shown in Figure 3. The forest cover area obtained for these two months is 27498.8 and 28449.7 km2 for April and Oct. respectively. This area is 51.8% and 53.6% respectively for April and Oct. It averages 52.4 %, which is more or less same as obtained using NDVI images. As per the Forest Survey of India (FSI) report, the forest cover is 44.3 % and the area in this report has excluded Hardwar district. The total area is 51,125 km2,while the forest cover is 22,669 km2.

Conclusion
This paper has demonstrated that IRS WiFS with medium resolution is a suitable method for forest cover assessment. This type of study has significance in terms of Forest Management is useful for various hydrological studies. The satellite data were classified using the Unsupervised Classification technique and on the basis of NDVI. The actual forest cover has been estimated at 52% of the geographical area, while Forest Survey of India (FSI) has estimated the cover at 44.3% of the geographical area (Hardwar district is not included).