If you are familiar with the Geospatial Information & Technology Association (GITA), you have probably heard or seen us say, “Everything is somewhere.” It may strike one as merely funny at first, but when you really start to think about it, you begin to realise that it is indeed true. The connection of place to what geospatial professionals around the world do each day is obvious.

As much as everything is somewhere, infrastructure is everywhere, or very nearly so. Geospatial data are crucial to analysing location for every infrastructure- related project. Now more than ever, the full potential of geospatial solutions in owning, operating, maintaining and protecting the infrastructure is being actively demonstrated around the world. Certainly at this point, there are far more questions than answers. It is vital for the geospatial community to get and remain involved, to stay connected and to keep abreast of rapidly changing developments, and to improve our communication and information sharing on a global basis.

The reason is straightforward: the geospatial community will eventually have the answers to these many questions. The solutions to these problems will be identified where our many and varied infrastructure assets, geospatial technology and geospatial practitioners meet. The intersection of these important elements is where geospatial professionals live, and where GITA is focussed.

Infrastructure can be viewed as all fundamental services, activities and operations that sustain our communities and our way of life. Our mission is straightforward – to encourage and enable the use of geospatial technology to help address our growing infrastructure problems.

And these problems are indeed growing – to unprecedented levels. 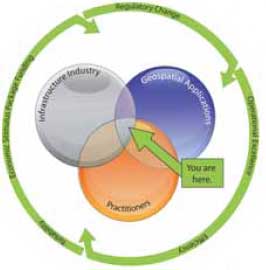 As documented by the American Society of Civil Engineers in the latest edition of its Infrastructure Report Card in February, the current state of our infrastructure assets is not good. In fact, in the United States, a general rating of D was given for 11 broad infrastructure categories. Estimates of what funding it will take to raise the level of these assets to ‘good’ exceed $2.2 trillion over the next five years.

Here are just a few of the disturbing statistics:

Infrastructure at a crossroads
The scale and reach of our collective infrastructure inadequacies is the focus of a recently published report from the Urban Land institute in Washington, DC (www.uli.org). The newest edition titled, “Infrastructure 2009: Pivot Point,” states the case that the United States and the world have arrived at a critical juncture for overhauling our ‘dilapidated and outmoded infrastructure.’ We can either ‘leverage crisis into opportunity for future growth by developing a new 21st century infrastructure model,’ or we can ‘backslide into more of the same: greater congestion, deteriorating road and transit networks, and the heightened probability of systemic water system failures.’ The report also warns that the massive stimulus funding currently underway for major infrastructure projects is not substitute for a long range, strategic effort to ‘maintain national prosperity in a rapidly evolving, more competitive global marketplace.’

Each country reviewed has its own unique conditions and problems. India’s aspirations and potential to transform into a global economic power are being tempered by the struggle to modernise its infrastructure while coping with surging population growth and expanding industries that are outstripping existing and planned infrastructure. According to the report, ‘the World Bank estimates that traffic accidents cost India about 3 percent of its gross domestic product annually,’ and over 100,000 people are killed each year. Much of this is due to roadways that are becoming increasingly inadequate. Bangalore’s new state-of-the-art airport will certainly add to that city’s status as a center for computing and software development, but the lack of sufficient water lines from the city is preventing construction of planned office complexes and retail facilities around the airport.

On February 17, 2009, U.S. President Barack Obama signed into law the American Recovery and Reinvestment Act (ARRA), more familiarly known as the Stimulus Bill. Since then, the U.S. government has provided billions through the ARRA to stimulate the economy. Significant funding has been devoted to ‘shovel ready’ infrastructure projects, although it has been difficult to pinpoint these investments in many cases due to the scope of the funding and the fact that stimulus funds have just begun to work their way through the economy.

A recent spending estimate on recovery.gov, the government’s website for tracking the effects of the stimulus on the economy, indicated that US$ 111 billion had been allocated to ‘infrastructure and science.’ Recent reports from within the U.S. geospatial industry have shown that, of this amount, just over US$ 73 billion has the potential to be used in geospatial projects, just in an estimated 24 federal agencies. It is probably still too early to accurately pinpoint how much of this funding is directly attributable to pure infrastructure rehabilitation, although a state-bystate tracking effort is available on recovery.gov. By its own assessments, the government has indicated that the vast bulk of the stimulus money will not be spent until well into 2010.

Geospatial technology and infrastructure
I believe that geospatial technology is ideally suited to addressing our pressing infrastructure issues, and I am sure that geospatial professionals and practitioners around the world would agree. This view is substantiated by several recent reports, including Guiding Principles for the Nation’s Critical Infrastructure, issued by the American Society of Civil Engineers (ASCE), the organisation that developed the aforementioned Infrastructure Report Card. In addition, a report from the National Academy of Sciences titled Sustainable Critical Infrastructure Systems: A Framework for Meeting 21st Century Imperatives is also instructive.

GITA member David Boyles, Landdesign Surveying, agrees:
“The use of 18th century political boundaries to make 21st century infrastructure decisions is a problem. Our sewage flow doesn’t stop at a county or any boundary line and the clean waters for our jurisdiction or property did not begin at a jurisdiction line. There is always someone upstream. We have to become regional based upon resources. With GIS, our leaders are better able to see the need for cooperation and to visualise the impact of their decisions, as well as the possibilities from the spatial relationships of their actions. That is not to say they always follow the guidance that has been provided, but absence of data will almost always become a bad decision. For us to make reasoned decisions we, as GIS professionals, must understand the challenges, the systems and the problems to provide the best data and mapping possible.”

The ASCE ‘guiding principles’ were developed to inform the planning, funding, design, construction and operation of critical infrastructure systems, as well as to protect public safety, health and welfare. The four principles propose to (1) quantify, communicate and manage risk; (2) employ an integrated systems approach; (3) exercise sound leadership , management and stewardship in decision- making processes; and (4) adapt critical infrastructure in response to dynamic conditions and practice. While not incorporating specific technologies or methods, the principles ASCE articulates seem to make the case for geospatial. What better tool to quantify and communicate risk exists? Geospatial inherently integrates things, even seemingly unrelated things, thereby adding considerably to a manager’s ability to make sound decisions. Finally, rapidly changing, dynamic conditions lend themselves well to a geospatial approach. Geospatial technology is the ideal tool to ensure that these guiding principles are observed in the course of meeting our critical infrastructure challenges.

The National Academy of Sciences report also touches on several key aspects of how geospatial technology can be leveraged to help address the infrastructure problems we face. It focusses on the interdependencies of infrastructure assets and again; geospatial technology is well suited to such an approach. Noting that renewal of national infrastructure assets must take into account ‘an extensive network of existing systems, urban development, ownership patterns, construction processes, management practices, financing mechanisms, and regulatory mandates,’ the report offers the following observations about infrastructure:

According to Damon Judd, a GITA member who works for Denver Water:

GITA has developed a foundation for keeping its members and constituents informed and educated as the infrastructure and stimulus funding situation evolves. The Geospatial Dimensions of Critical Infrastructure and Emergency Response White Paper series includes a seminal paper on ‘infrastructure interdependencies,’ as well as four additional white papers in critical infrastructure sectors – water/wastewater, oil and gas, electric and (coming soon) transportation. These are available for download at no cost from the association at .

A major ongoing effort – officially launched on September 9, 2009 (9/9/09) – is GIT4Infrastructure.org, a new interactive resource for all things related to geospatial technology and the infrastructure. This is intended to be a major resource for GITA members and others worldwide and will evolve well into the future.

A major element of the site is a newsfeed, which harvests articles and news from a variety of media related to the use of geospatial technology in infrastructure, related stimulus funding, infrastructure success stories, and much more. I expect this site to evolve as a major resource for geospatial practitioners as the continuing infrastructure story unfolds over the next few years.