2.3 Water Budget Method
For long term observation, evaportranspiration was obtained from rainfall and discharge for the catchment. Water budget is given by Figure 1. NDVI in Tade River watershed in 1997
3.2 Time Series of NDVI
Apparently, the steady land cover in time such as forest and the unsteady land cover such as agricultural fields should be separated in analysis for the time series of NDVI. The NDVI of forest fluctuates in time with daily air temperature. The correlation between the NDVI and air temperature yielded the next equation.

On the other hand, the agriculture field such as a paddy field changes from grass to bare soils, water surface, crops and bare soils seasonally within three to five months. Especially in double cropping, land covers change through the year. NDVI for paddy fields fluctuates through the logistic curve from rice planting to its earring and approaches the maximum . From the earring to the mature period, the NDVI decreases and yields the minimum in rice reaping (Uchijima, 1976).

As NDVI fluctuates through a continuous curve, it can be interpolated with such a curve. Thus, NDVI for agricultural fields can be estimated through the year using such a curve as a logistic curve. Therefore, the next regression curves were applied for the time series of NDVI.

As a result, the time series of NDVI could be fitted with these curves very well except water surface as shown in Table 5. Using the air temperature curves as (16), the time series of NDVI was estimated. Eq. (17) gave good agreement with NDVI for less than 300 Julian day. Eq. 918) fitted with NDVI for all land covers almost through the year as shown in Figure 2. Among them, the best fitting of Eq. (18) was obtained for forest (r2=0.997) and grass (r2=0.971) with seasonal periodicity. 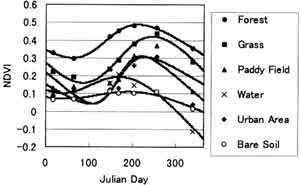 Figure 2. Time series of NDVI for each land cover and its regression curve
Table 5 Regression curves and their coefficient of determination R2