Abstract
Direct runoff in a catchment depends on soil type, land cover and rainfall. Of the many methods available for estimating runoff from rainfall, the curve number method (SCS) is the most popular. It can be used as a lumped model or a distributed model. The curve number of an area, which is the parameter used in this method, depends upon soil and land use characteristics. The present study is an attempt to collect and analyse data concerning these characteristics for the catchment of Lokapavani river using remote sensing and GIS. Lokapavani has a catchment area of 470 km2 in Karnataka. Since the curve number method is used here as a distributed model, it is necessary to get information concerning a large number of sub-catchments in the basin. Hence remote sensing and GIS techniques have been used. IRS-1D LISS-3 satellite image was used to obtain land cover information by ERDAS 8.4 software. Soil map was prepared by collecting data from the field. The thematic layers like soil map, sub catchment map, Thiessen map and land cover map were created in Arc View GIS 3.2a. Curve numbers are assigned for different land cover and soil types. Weighted curve numbers were obtained after integrating the above layers and mapped for different sub-catchments in different Thiessen areas. These data were used to estimate runoff.

There are many methods available to estimate direct runoff (Shrivastava, 1992) of which SCS (1974) method is the most popular. The curve number method (Chow, 1988) is a globally accepted method to estimate the direct runoff depending on land cover, soil type and its antecedent moisture condition (AMC) and topography. Remote sensing helps in providing land use/land cover information (Ghosh et al 1996 and Bisht and Kotyam, 2001) which is the input to SCS model. Remote sensing also helps in identification of soil type in a catchment. Since the data related to runoff are more, GIS will be used. It is a tool which stores, manipulates, retrieves and maps the metadata in a real world system (Keith 1997, Burrough, 1986). In this paper, the curve number method was used as a distributed model (Kilgore, 1999) where the runoff for smaller catchment within the whole catchment is estimated. An attempt was made to use GIS technique to develop a digital database using a classified image for the application of Curve Number method for estimating runoff from the basin and parts thereof. Earlier, the direct runoff was estimated by SCS curve number method (Durbude et al, 2001) as a lumped model in a semi-arid environment. Since the runoff depends mainly on land use / land cover, classification of satellite image should be as accurate as ground truth. Accuracy of satellite image gives rise to the accuracy of land use / land cover which in turn gives rise to accuracy in estimating the direct runoff (Ghosh, 1993).

Study Area: Lokapavani is one of the tributaries of river Cauvery. It originates at Nagamangala taluk and joins at Srirangapatna. The catchment is located between the 12o30′ N and 12o45’N and 76o25′ E and 76o50′ E geographically. It drains an area of 470 km2 as shown in Fig. 1. The annual rainfall in the catchment is about 600 mm to 800 mm. The catchment is divided into two zones. In the first zone, 35% of the total catchment area is irrigated by Vishweswarayya Canal and Chikkadevaraya Sagar Canal (CDS) from KRS reservoir. Remaining is the rainfed zone. The major crops in the study area are sugarcane, paddy, mulberry, coconut, jowar, finger millet, maize and betel nut. People grow both kharif and rabi crops in the command area.

Methodology
The Soil Conservation Service (SCS) of US first developed the curve number method in 1972. Although originally developed for agricultural purposes, the method is being widely used to estimate daily runoff volume from daily rainfall. The curve number method makes use of soil categorisation based on infiltration rates and land use i.e., the manner in which the soil surface is covered and its hydrologic conditions, as important parameters influencing runoff. The advantage of this method compared to other methods lies in the fact that the parameters used here are relatively easy to estimate.

For the simpler storm, the relation between rainfall, runoff, and retention at any point on the mass curve can be expressed as

The above equation applies to on-site runoff for large watersheds. There is a lag in the appearance of the runoff at the stream gage and the double-mass curve produces a different relation. But if storm totals for P and Q are used in Eq.1, it does apply even for large watersheds because the effects of the lag are removed.

Eq. 1 can therefore be rewritten:

Solving for Q produces the equation:

which is a rainfall-runoff relation in which the initial abstraction is zero. If an initial abstraction (Ia,) greater than zero is considered, the amount of rainfall available for runoff is P – Ia instead of P. By substituting P – Ia, for P, Eq. 4 becomes: 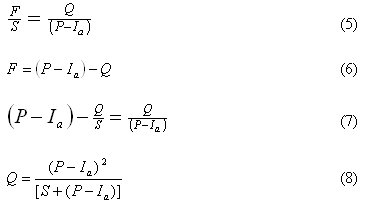 S – Potential maximum infiltration
which is expressed in terms of curve number (CN) given by the relation.

The parameter CN depends on the combination of hydrological soil, vegetation land use complex (SVL) and antecedent moisture condition of a watershed. CN varies from 0 (no runoff) to 100 (all rainfall becomes runoff).

USSCS has derived the CN for different SVL complex and AMC for USA. But this method has been modified by the Ministry of Agriculture in India (1976) to suite Indian conditions. The initial abstraction (Ia) is usually taken as equal to 0.2S for Indian conditions. Hence equation (8) becomes

Similarly, CN for different SVL and AMC conditions have been taken from Handbook of Hydrology (Ministry of agriculture, India, 1972). Since CN also depends on soil type, United States Soil Conservation Service (USSCS) has classified all soils into four hydrological groups viz., A, B, C and D. Group A soils are the highest runoff producing type. The indication of wetness used with runoff estimation is designated as AMC-1, AMC-11, and AMC – 111 represent dry, normal and wet conditions respectively. Suitable conversion formulae for evaluating the curve numbers for AMC-1 and AMC – 111 from AMC –11 values were used.

Analysis. The work in the present analysis involves integration of remotely sensed data with spatial data in a GIS platform. The following steps were adopted to arrive at weighted average CN for different rain guage stations. Topographical maps of scale 1:50,000 were used as base map. It is geo referenced in Arcview GIS to demarkate the catchment boundary. The different thematic layers, like drainage network, Thiesson polygon and soil type were created. Since the CN method was used as distributed model, the entire catchment was divided into 24 sub-catchments which form a separate layer and is shown in Fig.1. IRS 1D–LISS-3 satellite image was processed using ERDAS 8.4 imagine. 15 training sites containing forest type, paddy, sugarcane, water bodies, residence, barren and dry cropland were used. Supervised classification of IRS ID – LISS – 3 was done using the above training sites and finally classified into 6 categories viz., irrigated area, dry cropland, barren, water body, residence zone and forest is shown in Fig 2. CNs were assigned for different types of land use / land cover and soil under normal weather conditions. Weighted average CN for each Thiesson area is then worked out using the equation.

The above CNs are shown in Table 1. These CNs were used to estimate runoff in the catchment using Eq. 10 for a given rainfall. Weighted average CN are mapped using GIS and will be used for the estimation of runoff.

Results
In the present study, an attempt has been made to determine the weighted average CN for different land use / land cover and soil type in Lokapavani catchment to estimate the runoff. Remote sensing data was used to obtain information concerning hydrological parameters of land use / land cover. GIS was used to analyse and to integrate the various thematic layers with remote sensing data.

IRS-1D LISS-3 image was classified into six categories viz. irrigated crop land, residential zone, barren land, water bodies dry crop land and forest by maximum likelihood method of supervised classification. Accuracy of 90.26% was obtained. It was observed that the residential category is least classified compared with other category, because of mixing of pixel numbers with barren category. Hence certain pixels are mixed with barren and residential zones. The weighted average CNs are calculated after integration of various thematic layers using GIS. The weighted average CNs are shown in table 1. 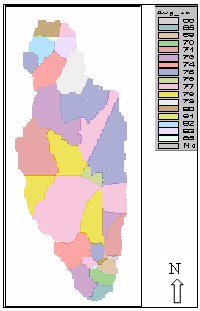 The weighted average CNs were finally mapped for visual interpretation using GIS (Fig. 3). It was observed that the least average CN (60) was found for irrigated land which leads to less runoff. The maximum average CN (85) was found in the dry crop land which results in maximum runoff.

Conclusion
Lokapavani catchment is one of the sub-catchments of river Cauvery, spreading over an area of 470 km2. Remote sensing and GIS techniques have been used to get and interpret the spatial data for all the 24 sub-catchments of Lokapavani basin. The task of data collection and interpretation was made much simpler using the above technique compared to conventional methods. From the analysis, the weighted average CNs were evaluated for the entire basin which is very much useful for the prediction of runoff from the basin.

Acknowledgement
This research was a part of the Project “Estimation of return flows in Cauvery river command area,” funded by the All India Counsel for Technical Education (AICTE), Govt. of India. The authors are thankful to AICTE for their funding and irrigation departments for providing necessary data.