Introduction
Water quality assessment of ocean and inland waters using satellite data has been carried
out since the first remote sensing satellite Landsat-MSS has been operational (Thiemann
and Kaufmann, 2000). Many researchers used satellite images in their investigations
[Allee, et al., (1999), Forster, et al., (1993) and Ritchie, et al., (1990)]. However, in this
study we used airborne remote sensing. A digital camera was used as a sensor to capture
the images at altitude of 8000 feet. The main objective of the present study is to update
our proposed algorithm for mapping total suspended solids in marine environments using
digital camera images from previous study (MatJafri, et al., 2002). We also attempted to
develop a simple correction technique for the airborne images acquired from different
dates, locations, and different flying altitudes. Data from seven image scenes were
combined in the present analysis. This study also proposed a cheaper and economical
alternative to overcome the problem of obtaining cloud-free scenes in the Equatorial
region. 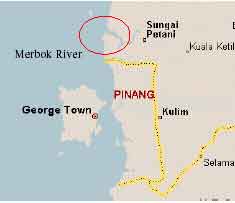 Optical model of water
A physical model relating radiance from the water column and the concentrations of the
water quality constituents provides the most effective way of analyzing remotely sensed
data for water quality studies. Reflectance is particularly dependent on inherent optical
properties: the absorption coefficient and the backscattering coefficient. The irradiance
reflectance just below the water surface, R(l), is given by Kirk (1984) as

The inherent optical properties are determined by the contents of the water. The
contributions of the individual components to the overall properties are strictly additive
(Gallegos and Correl, 1990). For a case involving two water quality components, i.e.
chlorophyll, C, and suspended sediment, P, the simultaneous equations for the two
channels given by Gallie and Murtha (1992) can be expressed as

where aj, j = 0, 1, 2, … are the coefficient for equation (3) that can be solved empirically
using multiple regression analysis. This equation can also be extended to the three-band
method given as

Data Analysis and Result
Seven sets of the colour images were selected for calibration analysis. Figure 2 shows the
images that were used in this study. 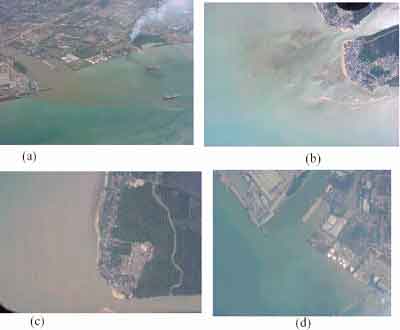 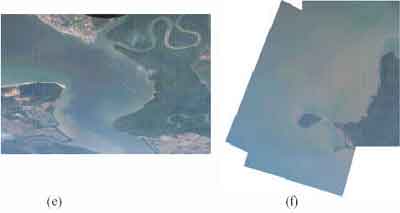 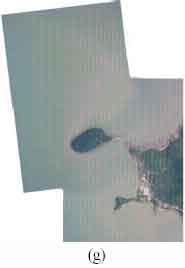 The colour images were separated into three bands, namely, red, green and blue
bands for multispectral analysis. The image of Figure 2(a) was taken at an altitude of
3,000ft, while the rest were taken from altitude of 8,000ft. The image of Figure 2(a),
Figure 2(b) and Figure 2(e) were taken obliquely. The view angle correction was first
performed to the oblique images to correct for the angular dependence of image
brightness. In this study, a contour map of the image brightness was plotted and the view
angle effect was removed based on the map. Then, the multi-date data were corrected to
remove the difference in atmospheric effects between scenes using radiometric
normalization technique. The vertical image of Figure 5(c) was selected as the reference
image and the average brightness of the chosen target; in this case, grass vegetation was
noted. We assumed the reflectance of these targets did not change with time. This
assumption is in accordance with the methods proposed by Lopez, (1990). The average
brightness values of grass in other images were then recorded. The difference from the
reference value was used to correct for each scene. All the brightness values of the other
five images of Figure 5 (a), (b), (d), (e), (f) and (g) were adjusted using this normalization
technique. This normalization technique forced the images to have the same atmospheric
conditions and the effects due to different camera altitudes have also been removed. The
corrected scenes were then regressed with the sea-truth data to obtain all the coefficients
of equation (4) in the proposed multi-date, multi-area, and multi-altitude analysis. Image
rectification was performed using second order polynomial tranformation equation.

The DN values corresponding to the water sample locations were extracted from
all the images. The relationship between TSS and DN of the data set is shown in Figure
3. The coefficients values are listed in Table 1. Figure 4 shows the proposed algorithm
produced high correlation coefficient (R) and low root-mean-square (RMS).

The TSS maps were generated using the proposed calibrated algorithm. The
generated maps were then filtered by using 5 by 5 pixels average for removing random
noise. Finally, the generated TSS maps were colour-code for visual interpretation as
shown in Figure 5. This indicates the reliability of the calibrated proposed algorithm for
TSS mapping using digital camera imagery. 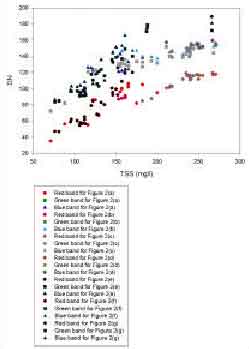 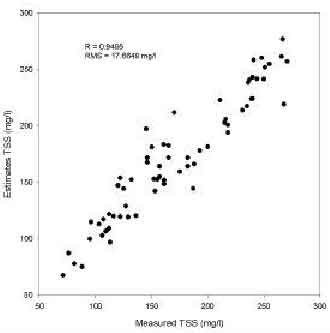 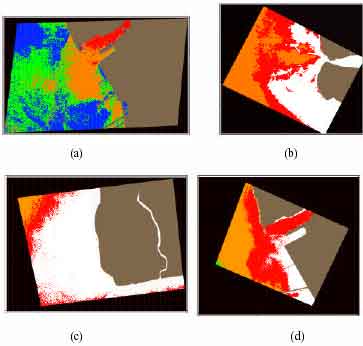 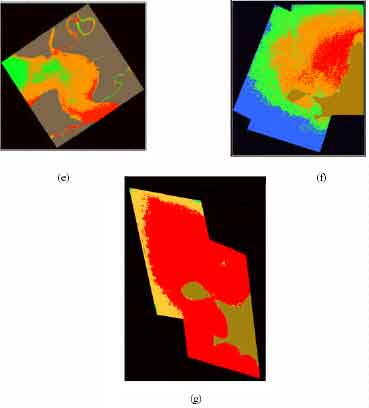 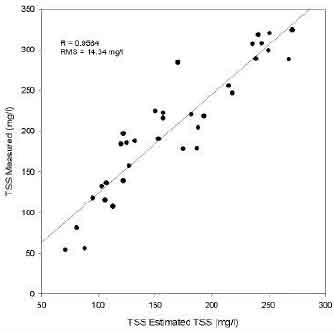 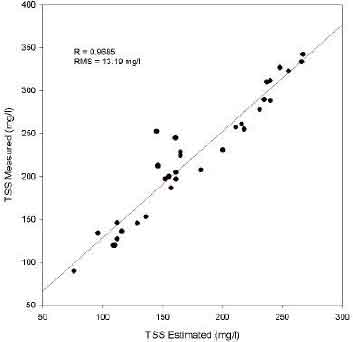 This study gives a cheaper way to overcome the problem of difficulty of obtaining cloudfree
scenes at the Equatorial region. Traditional water quality monitoring method based
on water sample collection is time consuming and requires a high operating cost. It is
good for determined the water pollution for real time. The proposed algorithm is
considered superior to other tested algorithms based on the values of the correlation
coefficient, R=0.97 and root-mean-square error, RMS=15mg/l. This indicates that the
TSS maps can be generated using digital camera imagery with the proposed algorithm.

Acknowledgement
This project was carried out using the Malaysian Government IRPA grant no. 08-02-05-
6011 and USM short term grant FPP2001/130. We would like to thank the technical staff
and research officers who participated in this project. Thanks are extended to USM for
support and encouragement.