Wether they are aware of it or not, most casual browsers of the Internet over the past five years would have come across at least one website which could be described as being an example of neogeography. These websites commonly show some sort of spatially referenced data as a point or choropleth map overlay on top of Google, Yahoo, Microsoft and more recently OpenStreetMap-supplied cartography or satellite background layers. These “mashups” will typically function as “slippy maps,” where users can click and drag around a map interface, with the content seamlessly streamed to the viewer without needing to refresh the web page.

An example of a neogeography website is Maptube (www.maptube.org) from the Centre for Advanced Spatial Analysis at University College London. The Maptube website and accompanying software GMapCreator enables a user to convert a standard offline GIS data file (e.g. Shapefile) into a format which enables display online and on top of Google background imagery. These data can then be overlaid with maps created by other Maptube users, enabling collaboration or enhanced interpretation. The interface also gives users some basic GIS operations such as zooming, panning and the ability to show, hide and change the opacity of layers. Websites such as this have taken GIS away from the realm of the isolated desktop user and in doing so created a broader and enthusiastic new audience who may traditionally have only engaged with geographic information as part of simple map reading tasks.

Evolution of neogeography
The two main technologies that have enabled neogeography are Asynchronous Javascript And XML (AJAX) and Application Programming Interfaces (API), both of which are now supported in modern web browsers. AJAX enables the development of websites with interaction that feels more akin to a desktop application. The XML component of AJAX refers to eXtensible Markup Language which is a set of data standards that enable information to be formatted in such a way that it is usable across a variety of different software. For example, using GeoRSS (an emerging XML type standard), location can be coded into online content such as news stories or blog posts. This information could then be used in multiple Web applications; for example, simple display on top of a base map in a web browser, or, in location based services delivered to Internet equipped mobile phone handsets. In both applications the source information would remain the same, however the application differs. APIs are available from a variety of websites, both spatial (e.g. Google Maps, Yahoo! Maps or Microsoft Live Maps) or aspatial (e.g. Facebook, Nestoria) and provide a variety of functionality to third party applications. Although it is a task to create websites using APIs, the construction of these applications is far simpler than the learning curve required to install, configure and manage more traditional Web GIS platforms. Other contributing factors to the rise of neogeography have included the increasing prevalence of cheap mobile data bandwidth, the growing sophistication of mobile phone web browsers and the decreased cost of devices that are location aware. Through these combined technologies citizens can act as distributed sensors to gather huge volumes of information from across wide geographic areas. 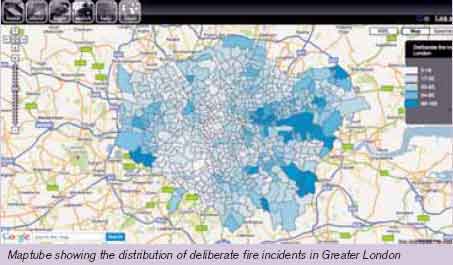 This crowdsourcing relates to how large groups of people can work together for a common goal by performing functions that would either be difficult to automate or expensive to implement in a non distributed environment. One, if not the most successful neogeography project using this collaborative paradigm is OpenStreetMap which aims to create a set of free to use global map data through assimilation of volunteered geographic information. This information is collated by the OSM community from a variety of sources including GPS traces, digitising of satellite data or the agreed upload of licence free spatial data from third parties (e.g. a NMO). Once entered into the OSM database, these data then become available online as a slippy map in a publicly accessible website. In addition, unlike commercial mapping websites, the data are also available to download in vector format with a creative commons licence where the only requirement being that an attribution is given when the data are published or displayed. This resource has begun to spawn a number of commercial businesses who have based their services around these data.

Digital justice: Public data, neighbourhood and civic engagement
Neogeography requires something to map, be this community created content such as the location of photographs on Flickr or the availability of free to access databases such as houses for sale, e.g. Nestoria. There are a variety of potential motivations for why people create mashups from data such as these. Some of these mashups exemplify serious social concerns, such as plotting hurricane damage and locations of people at risk, while others remain less serious such as the global prices of beer or Big Macs.

However, a trend starting to emerge from the many multiple examples of neogeography are increasingly sophisticated uses of the technology to provide information portals that create opportunities for civic engagement or provide neighbourhood intelligence. For example in the UK, one can request that local authorities fix some aspect of the local area or get alerts of potential new buildings being planned near one’s home. Other sites provide local intelligence systems detailing multiple aspects about the neighbourhoods in which one lives. It looks as though this trend is set to continue in the UK.

Neogeography has a clear power to engage with the public by providing access to information that previously has been disparately located or in formats that hindered interpretation. As such, neogeography powered geoportals present significant potential to enhance social justice by empowering local communities with sophisticated yet simple-to-use tools for describing and challenging those issues of neighbourhood concern. However, during this flurry of development, it is important for policy makers to remember that there is a world outside of the Internet.

Previous research at University College London showed that these patterns of disengagement are far more complex than a simple “digital divide,” with users of the Internet engaging (or not) in many different ways. Promoting the benefits of the Internet or enabling access to restricted groups is a priority if the maximum societal benefit is to be utilised from neogeography.

Towards an intelligent neogeography
Neogeography has had massive impact in technical communities and is demonstrating increased potential to benefit society. However, neogeography is already equipped with the bulk of those tools necessary to enable rich data to be assembled and then displayed in visually engaging formats. So where do we go from here? Two avenues for future developments in neogeography that appear to have growing academic and community interest are data mining and linking visualisation to modelling capability. Much of these distributed data are openly available through APIs and can be queried by third party applications. However, as Charles Leadbeater (author of “We Think”) describes, “crowds are not automatically wise and mobs are not necessarily smart.” How do we make sense of all this data, what is reliable, and how can we aggregate it into operational information? Fortunately for the neogeographer, data mining communities have been thinking about this for a long time and a plethora of knowledge exists which could be brought into the field. This area of research is likely to be enhanced further with the growth of the semantic Web where data is provided with associated metadata enabling enhanced linkage or query. A second area of development is the linking of analytical platforms to neogeography style visualisations which will transform simple query and browse type websites into those which offer modelling and scenario testing capability.

For example, developments in the computational statistics field have begun to extend the capabilities of the popular statistics package R to offer Web service capability. These could be loosely coupled to neogeography interfaces and create very sophisticated analytical tools.

Neogeography has made significant advances in bringing basic GIS operations to the masses, enabling users with no previous geographic training to create, search and share their geographically referenced data with relative ease. Although the use of the term neogeography may lose popularity in a similar way to other online neologisms such as “cyberspace” or the “information super highway,” the basic principles of collaboration and openness are unlikely to lose momentum. The future looks encouraging, and it will be very interesting to see what neogeography brings in the next five years!