Abstract
Recording, mapping, 3D modeling and visualization of structures of architectural significance and objects of importance to cultural heritage currently received more attention for digital archives or VR museum. However, the objects are used to reconstruct by the operator taking a great deal of time, labor and skill using 3D CAD system or 3D CG software, and this operation become more difficult when the objects were lost. With this motive, an efficient 3D modeling system for recreating the lost historical objects is proposed by the authors. In this system, basic 3D parts for the objects and realistic descriptions for the parts by 3D CG are needed previously. But the most remarkable points of this system are its ability to model complicate objects using basic parts, and to modify the basic parts and textures.

This paper describes the efficient modeling system of the historical objects, and visual simulation of the Palatitsa Palace of Greece which was the lost object is demonstrated.

Introduction
Recreating historical monuments and buildings for cultural heritage under virtual environments has received attention from a possibility that people can appreciate or experience the historical objects and space through the computer at any time and without going to the sites. In particular, recreating the lost objects has interests to grasp city planning or civilization of those days. In order to recreate the lost objects, realistic descriptions of buildings is particular needed since buildings are important component of visual simulation, then the lost objects are recreated by CG operator taking great deal of time, labor for historical investigation. With these motives, the authors have been concentrating on developing an efficient modeling system which have ability to easy modeling and customize in cooperation with related researchers. For example, Figure 1 shows south and center area of the Palatitsa Palace in the north Macedonia of Greece. The Palatitsa Palace had been resided by the Philip II who was the father of the Great Alexander, and it is understood from this figure that almost historical monuments were already lost and recreating the palace is difficult. After describing the 3D modeling system developed by the authors, visual simulation of the Palatitsa Palace is demonstrated in this paper.

3D Modeling System
The authors have been developing an efficient city modeling using old maps (Yamada 1999, Namatame 1999), but the 3D modeling system was developed in this paper for acceleration of an efficiency and simplicity of recreating the historical objects. The most remarkable point of this system is an automatic modeling of complicated monuments using basic 3D parts for the objects such as column, wall and so on. The automatic modeling in this system can be performed by placement the parts according to planimetric map which was published in 1867 by Leon (Leon 1867). 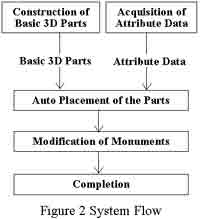 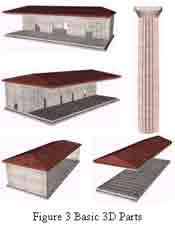 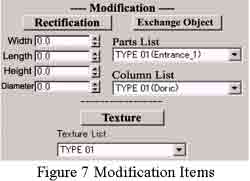 Figure 8 shows the modified result, and diameters of stone columns are modified in this figure. 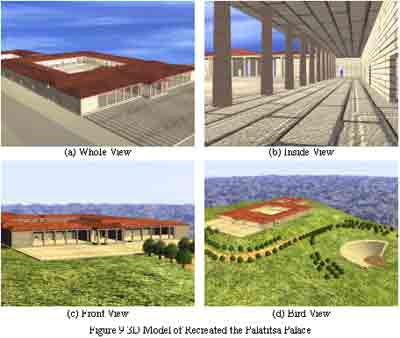 Evaluation of Modelling System
In order to evaluate the 3D Modeling System, the Palatitsa Palace was recreated by manual. 6 hours were needed for construction of basic 3D parts, but it took 4 hours for placement in manual case, and it took 20 minutes in auto placement (Figure 10). As an additional function for the efficient modeling method which developed in this paper, visual simulation can be achieved using 3D CG. By the way, utilization of Internet and VR techniques to facilitate promotion of cultural heritage is one of the terms reference of ISPRS WG V/4 (Image analysis and spatial information systems for applications in cultural heritage). For this goal, the visual simulation is opened at following web site:

3D Modeling System for recreating historical monuments was described in this paper, and the remarkable points of this system are as follows:

It is concluded from recreating the Palatitsa Palace that the 3D modeling system is expected to become a useful system not only lost objects but exist objects. There are issues, however, for further work. These problems include more efficient acquisition of the attribute data, and increase the kind of the basic parts so that the system be applicable to various objects.