1.Paper Overview
Over the last decades, the world has become increasingly vulnerable to natural disasters. Population growth and the increased concentration of physical assets in high risk areas are leading to increased exposures to adverse natural events. Unplanned and unregulated land use, lack of environmental controls, and the poor application of building standards contribute significantly to asset losses in the region. The trend toward increased vulnerability is likely to continue and when coupled with increased climatic variability, resulting from global climate change, future losses from natural disasters like earthquakes are expected to rise.

The acceptance of disaster-preparedness, where international financial institutions, national governments and large development agencies see mitigation strategies as an important part of their work, is now recognized as crucial by experts on disaster-risk reduction.

GIS provides an opportunity to civilian authorities and international agencies to enhance their preparedness for coping with natural disasters in general and earthquakes in particular.

Poor people in developing countries are particularly vulnerable to disasters because of where they live. Research shows that they are more likely to occupy dangerous locations, such as flood plains, river banks, steep slopes, reclaimed land and highly populated settlements of flimsy shanty homes.

The earthquake that devastated Bam in Iran in December of 2003 killed more than 40,000 people mainly because their housing was not designed to handle a major tremor. The availability of a probabilistic risk assessment tool may have better prepared the government to handle the situation.

It is the mixture of available GIS technologies like ESRI ArcGIS and accurate data capture on the ground and probabilistic risk assessment that can help the preparedness for such events.

The paper describes how the use of GIS technologies and probabilistic risk assessment can better prepare us for handling and responding to earthquake risk in the world.

Catastrophe risk models are built upon a sequence of modules that allow for the quantification of potential losses arising from a given hazard (e.g., earthquake), as shown in the figure 1.

(i) Hazard module: The hazard module defines the frequency and severity of a peril at a specific location. This is done by analyzing the historical event frequencies and reviewing scientific studies performed on the severity and frequencies in the region of interest. Once the hazard parameters for each peril are established, stochastic event sets are generated which define the frequency and severity of thousands of stochastic earthquake, volcanic eruption, hurricanes, flooding or landslides events. Depending on the type of hazard event, the module can analyze the intensity at a location once an event in the stochastic set has occurred. The module models the attenuation/degradation of the event from its location to the site under consideration and evaluates the propensity of local site conditions to either amplify or reduce the impact. 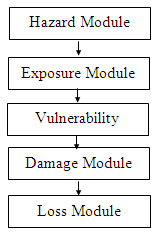 Advances in the development and presentation of geographic information allows for significant improvements to hazard analysis on a recurrent basis. The development of digital topographic models and improvements in land use and land cover analysis now allows the integration of the effects of land use practices in the production of the hazard analysis. Using the combination of existing land use datasets, topographic models and improved analysis of land use from satellite imagery, current and future land use scenarios can be evaluated to more accurately define the hazard resulting from a natural event. The real value of this capability is the ability to project future land use scenarios and examine the impacts of activities and policies in risk mitigation. .

(ii) Exposure module: The exposure module generates an inventory of “assets at risk”. This inventory is created using primary data in combination with remote sensing information. When primary data are not available, secondary data sources and “proxy” approach may be used. The module aggregates the value for each type of exposures as a product of assets at risk and the average replacement cost per unit of inventory.

(iii) Vulnerability module: The vulnerability module quantifies the potential damage caused to each asset class by the intensity of a given event at a site. The development of asset classification is based on a combination of construction type (say, wall & roof combination), construction material, building usage, number of stories, age, etc. Estimation of damage is measured in terms of a mean damage ratio (MDR). The MDR is defined as the ratio of the repair cost divided by replacement cost of the structure. The curve that relates the MDR to the peril intensity is called a vulnerability function. Each asset class and building type will have different vulnerability curves for each peril.

(iv) Damage module: To calculate losses, the damage ratio derived in the Vulnerability module is translated into dollar loss by multiplying the damage ratio by the value at risk. This is done for each asset class at each location. Losses are then aggregated as required.

(v) Loss module: Building upon a sequence of the first four modules, the model quantifies potential losses that might arise as a result of adverse natural events. Risk metrics produced by the model provide risk managers and policy-makers with essential information necessary to manage future risks. One measure is called the Average Annual Loss and the other is the Loss Exceedance Probability. Other measures based on these two metrics are the Pure Risk Premium and the Probable Maximum Loss.

3.Understanding Earthquakes and their characteristics

Illustration of the key characteristics of earthquake ground motion records:

Local site response to an earthquake is measured by recording the magnitude of ground motion at that site. Ground motion direction is comprised of varying degrees of vertical, horizontal, and oblique ground movement depending upon the type of fault movement. As an example, if you experience ground motion in northern California due to an earthquake on the Hayward Fault, which is a strike-slip fault producing predominantly lateral motion, then you would feel a strong component of side-to-side motion as well as some vertical motion.

Using these techniques and tools we can plot fairly accurate figures of the likely impact and losses due to any given type of earthquake.

Now comes the role of GIS where we use mapping capabilities to best utilize the information learned above. This can result in effective relief planning and preparedness in the event of a real earthquake

Once the model is used and the likely scenarios can be generated and impact seen on a geographic area then we have the need for a good GIS tool to present the information in an intuitive way where the decision maker has a birds eye view and can drill down to the exact details of the impact in any area of interest.

Using these features the planner and decision makers can better view and manage the data about the area under study.

Described below is a snapshot from a GIS mapping tool where the impact of an earthquake is seen on a road route between two cities. Information on this view would be vital in rushing supplies and relief to the concerned towns as well as planning for the same. Similar presentation and analysis can be done for assets like water purification and supply lines and other lifelines of the area to understand and prepare for disasters. Listing the damages and losses is not the end of the road for any effective planning strategy. Another important component is the understanding of the magnitude and amount of relief needed for the people impacted by the event. Here the authorities calculate the amount of food, water, shelter and energy requirements for the affected population. The software must therefore have the required data and intelligence to compute the relief amount required. Listed below is the generally accepted categorization of the relief efforts needed.

We use a recent project executed by RMSI as below to explain the effective utilization of these knowledge areas for generation of an effective solution:

A project was undertaken for a country with a history of devastating earthquakes that have caused huge economic and human losses across the country. Since 1908, 14 earthquakes of magnitude VII or greater were recorded affecting almost 2 million people and causing massive economic losses.

An earthquake damage assessment model has been developed to estimate the impact of earthquakes in the capital city and sixteen pre-selected counties. The model estimates the damage state of buildings and lifelines, the level of functionality of utility distribution systems and the social impact for fifteen earthquake scenarios. The results are reported at the sector level within the capital and at the commune level within the other counties. Two scenarios are defined as “Reference Scenarios” as they represent two typical earthquakes, namely the 72 year return period most probable earthquake (Magnitude 7.6) and the 475 year return period maximum credible earth quake (Magnitude 8.0). An additional 13 scenarios of variable magnitude, depth and time of occurrence are developed to consider variations around the “Reference Scenarios”. Additional scenarios can also be generated from actual events in the form of Shake Maps.

Shake Maps are generated post-earthquakes. These scenarios can be analyzed by the import shake map feature available in software. The user can import a shake map into the system by clicking on the “import shake map” option on the screen and selecting the map to be uploaded from the available maps.

RMSI has developed a software system to implement the damage computation model. The software has been designed to be user friendly and accessible after minimum training. The results are displayed in a map or tabular format. The software system also allows authorized advanced users to update the underlying databases.

The system enables the users to run the reference models to compute potential damage to residential, commercial and industrial buildings, power grids and drinking water system, communication networks, essential facilities and lifelines and potential fatalities and casualties, directly by various mentioned perils and by the subsequent induced emergencies that might arise.

The system contains and manages inventory of data pertaining to General Buildings, Essential Facilities, Lifelines, High Risk Facilities and Human Assets and provides the stake holders the facility to add and update this data so the model reflects the current ground situation. The system is a single source standalone system with a dual English and Local language user interface. The data entry is in English only. Access to the system is restricted to authorized users only who will be defined through an administration module – that will enable the user with administrator rights to define the users of the system.

Output of the Software: Maps & Reports.

Maps: The software has very powerful mapping capability and can present the earthquake impact zone in a very intuitive, convenient and interactive map display. The map comes with many tools and standard options along with ability for the user to customize his view to a very large extent. The software generates reports for all asset categories considered for impact of the earthquake. The below given table lists all the assets of the state which are considered by this software and the third column is the list of reports that can be generated by the software:

Example of a report is as below:

The software can thus produce in-depth reports that can aid in emergency relief and planning activities.