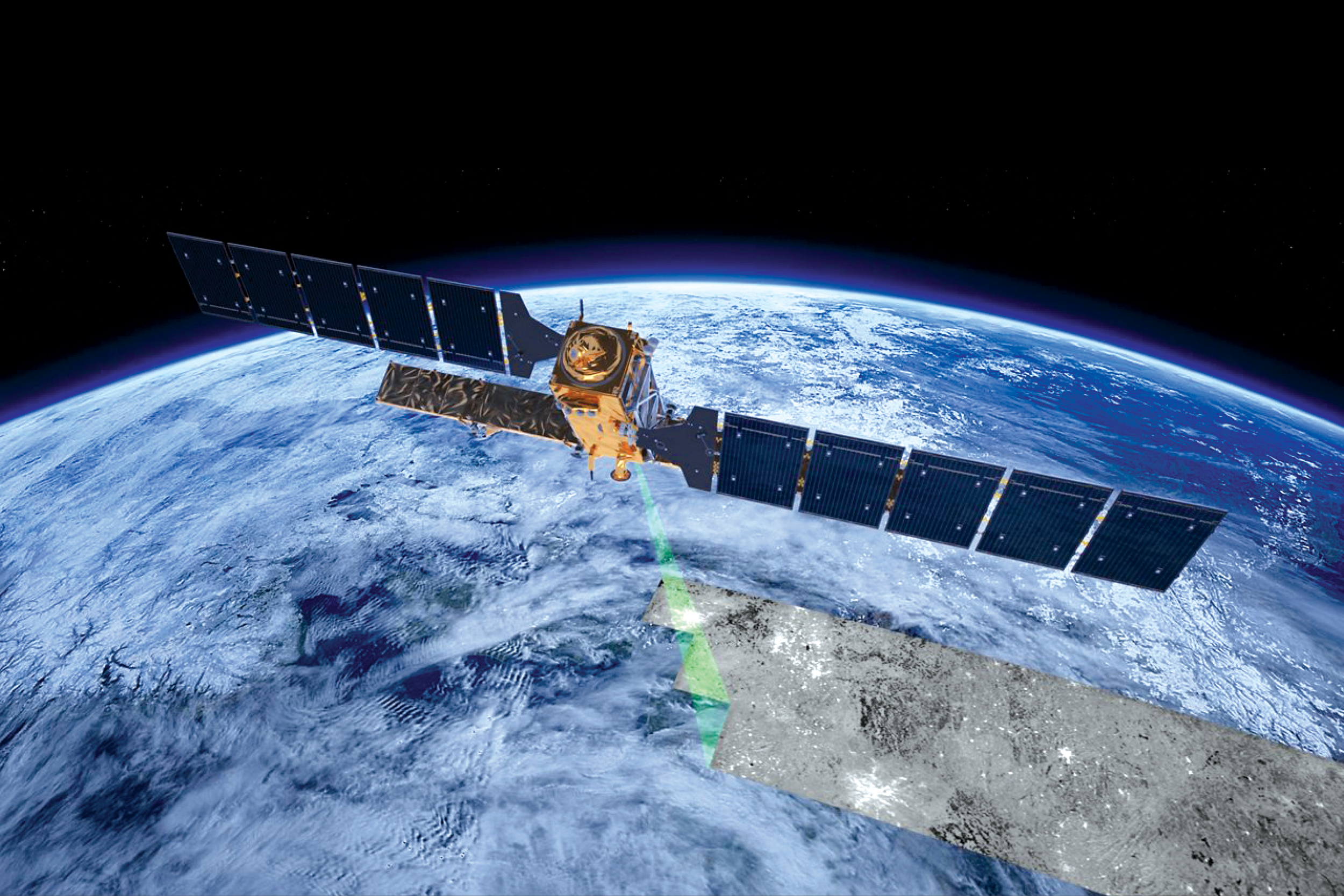 Satellite earth observation is a global enterprise right from the days of Landsat. However, with rapid privatization of the industry, there are conflicts between the data policy dictated by commercial requirements and national laws. Initiatives at national, sub-national and regional levels and their due alignment with each other is imperative to understand the impact on the industry.

The 2019 edition of the Global Geospatial Industry Outlook and Readiness Index (published by Geospatial Media and Communications in GeoBuiz report) shows that the geospatial industry was worth around $339 billion in 2018. The industry is projected to be worth $439.2 billion by 2020, growing at a CAGR (compound annual growth rate) of 13.8%. This growth acceleration can be attributed to continuous technology advancements in the industry, democratization of geospatial information riding on integration with advances in digital technologies and resulting innovative business models.

The earth observation industry alone is estimated to grow at a CAGR of 9.1% during 2018-23, according to Reportlinker, and is anticipated to be worth $11.8 billion by 2023. These numbers give an idea of the globally expanding geospatial market.

A closer look at the breakup of these numbers shows that the lion’s share of $439.2 billion belongs to the GNSS and positioning market ($260.8 billion), followed by GIS and Analytics ($88.3 billion) and earth observations ($79 billion). “This is mainly due to the growing demand for location-based information, proliferation of mobile devices and the growing need for GNSS devices in various industry segments such as agriculture, aviation and intelligent transportation systems (ITS),” says the Geospatial Industry report. GIS and Spatial Analytics segment is fostered by “growing adoption of Spatial Analytics in city planning, utilities management, e-governance, applications, retail and logistics, disaster management and various other applications”. Small satellites, nano satellites, near-real-time data acquisition and the growing value added industry using high resolution data are feeling the EO industry.

However, there is a twist in the tale. A year ago, the article in Geospatial World, “Who’s Buying all that Satellite Imagery?”, found that the big customers are the government departments, with defense being right at the top. Industry experts anticipate that by 2020, the market will be equally divided between government and industry, and by 2025, industry will overtake the government and a new segment of citizen consumers will emerge. In such a scenario, how should the governments respond in terms of policies and regulations?

At the 2019 Geospatial World Forum, a panel on National Policies and Strategies for EO Industry Development discussed many of these issues. One of the approaches that emerged was for the government and industry to work together in key areas such as disaster management, weather information, border surveillance and natural resources management. Massimo Camparini, CEO, e-GEOS, states the experience of the Italian Space Agency working with Telespazio for the company’s platforms for maritime surveillance, defense and intelligence, agriculture, asset management and cloud computing. This marks a paradigm shift from data sales to subscription-based solution platforms.

Max Craglia, Team Leader (Digital Economy) at the Joint Research Centre of European Commission, says, “It is not just space, but the whole geographic information domain that contributes not just to the policies of the union, but also to economic and social development, which also are the policies of the European Union.” It is interesting to note that the JRC is conducting a study on the impact of EO industry on geospatial policies. One would have expected it to be the other way around, but it highlights the point that technology outpaces policy and the latter is always trying to catch up.

Geoff Sawyer, Secretary General, EARSC- Belgium, asserts that the composition of geospatial industry in Europe has changed. “In the findings two years ago, we discovered nearly 8000 employees in 500 companies in the EO services sector in Europe with 4.2 billion revenue. Of these companies, 96% were SMEs, with 66% of them with less than 10 employees,” he says. In an ongoing review, it emerges that in this sector, 46% are startups. It is also clear that the free and open data policy around Copernicus is a great help to these companies.

The view from the industry is well enunciated by Agnieszka Lukaszczyk, Senior Director for EU Affairs, Planet. She says, “It sounds like something idealistic, but we need to keep public good at the very top. Why do we do what we do? What is the big picture? And this is what’s interesting and why I joined Planet — because we are a company divided in two parts. One is the commercial part where we have to do business and make money, but we do that to take the second company’s initiatives ahead, which is doing the humanitarian efforts with a lot of free data for natural disasters and issues for environment, or for African countries to monitor poachers.”

“We also blend governments and companies, but it’s really people, and their expectations are different. In the public sector, it is taxpayers. Money comes in potentially from taxpayers, but the risks that the public sector is going to take are very low because they have to respond to taxpayers. Whereas in the private sector, it’s the opposite: you have few investors and they are willing to take risk. So the priorities that the two operate on are totally different,” Agnieszka adds.

She stresses that therefore it is important for the two to talk. “Public private partnerships are the key. More and more industries are doing a lot of work in space. It is important that we work together and the industry should have a voice in the policy, particularly in space. Without industry, space would not be what it is today. A lot of people in the industry feel bad about regulations. So we need to put in smart policies that actually foster innovation and growth and allow the industry to grow and upgrade. And we need to find this balance between what is public good and what market is offering,” Agnieszka explains.

An example of such a partnership is the servicing of the International Space Station, an international governmental effort, through the Dragon spaceship built by SpaceX, a private company in the US, and launched by Falcon 9, developed by SpaceX from the launch infrastructure which belongs to NASA, a government entity of the US. There are no subsidies, no grants, but a business contract that shows the importance of government contracts in raising small companies to great heights. In general, the government is the biggest customer of services, hence procurement policies must become innovative, according to Geoff. Agnieszka adds that the government should include earth observation in policies for other sectors as a viable tool in order to increase the market size for industry.

The earth observation policies are essentially national in nature because each country has its own perception about data and applications relevant to its needs. Policies in turn define the regulatory framework and industries have to work within this framework. With respect of policies, it is necessary to cover both geospatial specific and general Information Technology policies because geospatial can be considered to be a special case of IT. Most IT innovations like the Cloud, Big Data Analytics, AI and Deep Learning find their way into geospatial applications. Some other technologies like Internet of Things gain value with geospatial inputs.

At the core of this is the National Mapping Policy, usually administered by the National Mapping Agency (NMA). The NMA is charged with the maintenance of a geodetic frame of reference and a series of authenticated maps of the country with official feature names. It has to serve the civil and military needs of the country with various products for different sections of society. Given this mandate, the NMA must recognize the needs of industry and society and create an enabling environment so that the benefits of public-private partnership can be realized. While NMAs are perhaps the oldest spatial organizations in any country, they therefore carry a baggage of tradition, which they have to overcome through recognition and adoption of modern technologies. Private entities can play a major role in the PPP mode. 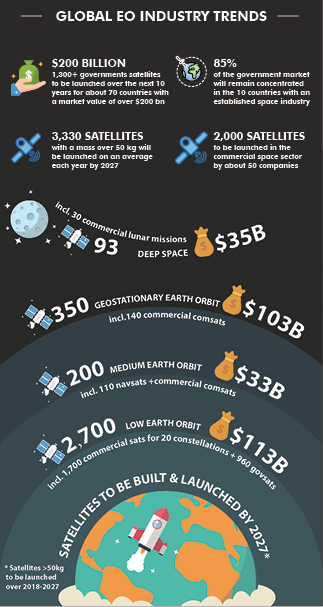 NMA and other agencies, both government and private, need to jointly evolve a National Geospatial Policy that addresses earth observation from space, piloted and remotely operated aircraft, sensor networks and GNSS. An Open Data Policy is needed specially when the data is collected at taxpayers’ cost. While private agencies are justified in costing their data because they have to satisfy their shareholders, public agencies cannot re-tax the already taxed. Often, an excuse is made by government agencies that the cost is just recovery of the direct cost of data publishing and dispatch. Be that as it may, the case for open data is more than proven by Landsat and Copernicus. Many innovative applications using these datasets are the dividends that benefit the taxpayer.
Other policies that impact geospatial systems are those concerning science and technology, innovation and information & communication technology. These include strategies for Cloud infrastructure, network infrastructure, IoT infrastructure and digital empowerment. In parallel user departments, there is need for strong policies and strategies like adoption of BIM, engineering design and IoT. The value added industry, particularly in geospatial applications, needs to invest in Data Analytics, AI and Deep Learning and use them in solutions for user departments.
Volunteered information and crowd sourcing are neglected data sources. There has to be a clear policy on the way such data can be curated and used in geospatial solutions, particularly in real-time and near-real-time situations.

Satellite earth observation is a global enterprise right from the days of Landsat. However, with the rapid privatization of this industry, there are conflicts between the data policy dictated by commercial requirements and national laws. Therefore, such industries have to be sensitive and abide by national laws of the countries in which they operate. As far as space is concerned, it is governed by the Outer Space Treaty of the United Nations, but geopolitics is tempered by national goals. A case in point is the Long Term Sustainability (LTS) norms under discussion in the S&T Committee of the UNCOPUOS. Formulated in 2016, these norms could find approval for being presented at the General Assembly only in mid 2018, and that too only for 21 of the 28 clauses, after opposition from Russia finally ended. 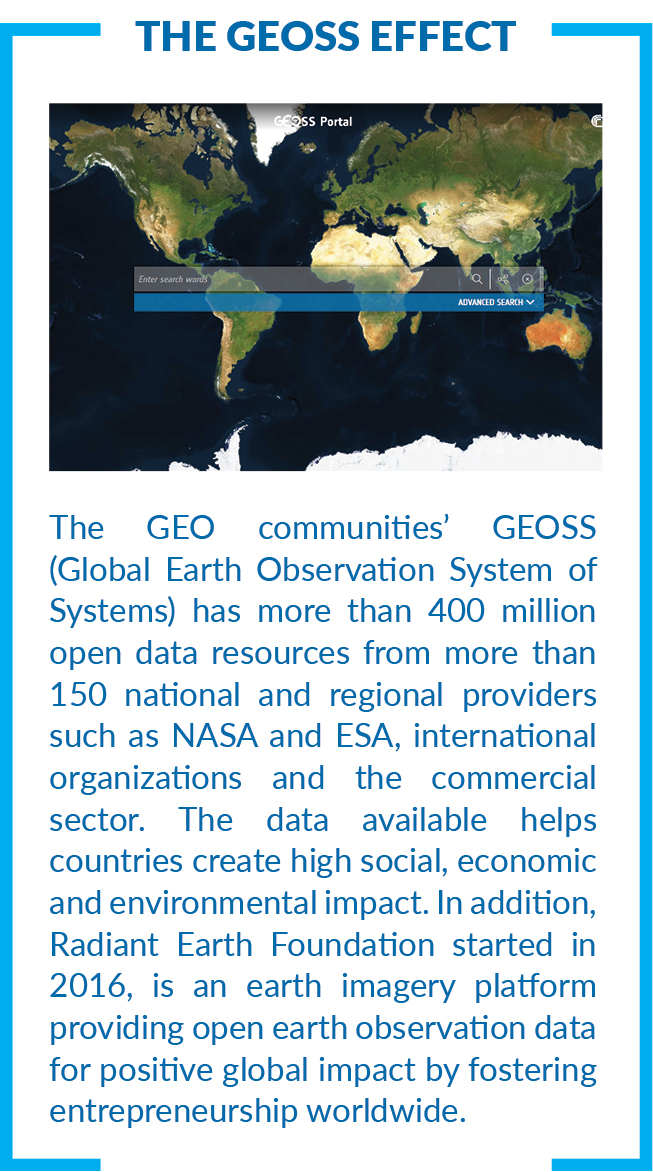 LTS is essential because of the proliferation of small satellite constellations for earth observations as well as global communications are endangering the space environment and might lead to the Kessler syndrome where there might be a chain reaction of satellites crashing into each other. It is interesting to note here that the World Economic Forum is working on a Space Sustainability rating system that will rate industry and governments on how ‘cleanly’ they use space. The European Space Agency and the Space Enabled Research Group of MIT Media Lab are working on this rating system, and recently, Lockheed Martin Space has agreed to be a ‘guinea pig’ for evaluating the effectiveness of the system.

Agnieszka had mentioned about the role of the UN treaties in international cooperation and the need for industries to become active participants in the formulation of these international rules, principles and treaties to advance their international reach for business. The LTS and Space Sustainability rating system are steps in this direction.
The 2019 GeoBuiz report has a section on Geospatial Readiness Index, which is revealing. While a few developed countries rate high on this in terms of enabling policies, the developing nations do not fare that well. Even a country like India, which has a vibrant space activity and a growing geospatial industry, falls behind in enabling policies. There is a hangover from the colonial past and very real dangers in the geopolitical present that act as brakes. This is an area where more attention needs to be given by each country in framing policies to advance applications of geospatial systems. 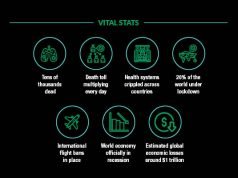 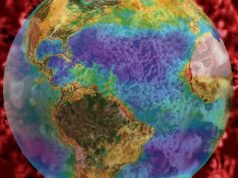