Monitoring of reservoir level and its storage capacity has a significant importance in evaluation of water utilization, crop production, hydropower generation and an instrument in planning process. The parameter could be an early warning indicator to the crop production and Hydel power generation of the country. Any significant deviation from the norms could attract attention of the planner and administrator of the country. Covering this aspect under e-governance and dissemination of information over NICNET/Internet, is being discussed as an information technology component under the current prevailing technology of Internet.

Water is the key Element in social and economic development of the country, which is becoming a scares resource due to over-increasing demands of the growing population , Agriculture , Hydropower and Industrial Users. Thus emphasizing the need of monitoring and specific utilization of water resource with appropriate communication technology for it’s availability, monitoring and management in the real / near-real-time environment. National Informatics Center , Ministry of Information Technology has been providing support to central water commission to monitor the reservoir over the NICNET through its district center and has been monitoring the reservoir and storage capacity of 63 to 70 reservoirs on a weekly/day-to-day basis over NICNET for the last more than 12 years and providing technical support to the various departments engaged in water resources planning including Union Ministry of Agriculture in the strategic crop planning process as an early warning indicator. The 63 reservoirs of which were being monitored initially consisted of live capacity at FRL of the order of 124.58 TMCM of the available capacity of the existing reservoir with installed Hydel power capacity 8555 MW and having a CCA of 10621 TH.Ha. Over the years empahsis has been laid to horizontally expand and cover more reservoirs , consequently, currently 70 reservoirs are being monitored under the CUG under NICNET with a total storage capacity of 135 TMCM comprising 78% of the total available storage, 11534 TH.Ha, Hydel power capacity of 8617 MW and covering the reservoir spread in more than 14 states and 12 major river basins. The system has also been transported from Cyber to NEC and finally to a Pentium System, which is operational at NIC-CWC node located at CWC, R.K.Puram, New Delhi. But, over the years the system had some administrative structural problems as the data is being fed in collaboration with NIC’s support at district centres and the reservoirs are spread over a distance of 14 kms., to 240 kms., from NIC District nodes. One of the major shortcoming was that the State Govt.,were not able to participate in the management of the water of their own state. Over the period of time better effective technology has come and the model has been revised to provide the complete informatics and administrative control to the state govt. under the CUG of NICNET/Internet. With the current available technology of Internet and GUI environment, it has become possible under JAVA and DB2 environment as an Web-Enabled application to evolve a new version to provide support to the state govts., with complete administrative and management control . The information thus collated from the various states can be placed on Internet for general viewing of the various departments of Centre and state govt., and of Planning Commission. This will not only give the effective monitoring and planning to the state govts., as well as to CWC,MOAG., and Planning Commission (PC) for the consolidated national planning.

Prevailing Reservoir Monitoring System
A country’s Water Resources development largely depends upon the supply and quality of its fresh water. The demands for the fresh water are increasing rapidly requiring holistic management of fresh water as a finite and vulnerable source. As we have already approached the 21st Century, there is a growing need for management and utilization of natural resources for its optimal beneficial use with the concurrent technologies. Thus the monitoring of the resources for the effective management and planning in the water sector has become most predominant aspect. After the severe draught of 1987, the MOA&C have set up a high level committee to constantly monitor the crop planning strategies required in national perspective . This committee also reviews the basic inputs such as water availability in irrigated agriculture sector. CWC assist this committee by compiling and forwarding the daily/weekly bulletin to MOA&C. The current login procedures for the RL&SCMS are explained below:
1. Login Procedure for State/districts/remote location.
The RL&SCMS which is operational at NIC-CWC node operational at CWC at Sewa Bhawan, R.K.Puram, New Delhi could be accessed thourgh the following procedures:

At the logon prompt the user will enter the User-Id of his state, already pre-defined and then the password (management control with the user to change the password- a security aspect).

e.g. for Maharashtra User the logon procedure is:

2. Procedure for CWC HQ.
CWC HQ. Users will login into their account with the specified User-ID and their password allocated to them. After successful, at login prompt
$ prgstt
The menu driven, interactive user friendly program displays the menu onto the screen such as

CWC is a privileged user who can access any of the option defined above however the remote user such as state/district can access only with restricted features.

The storage live capacity in consolidated as well as of individual reservoir is also graphically being evolved which depicts the 10 years average, preceding year reservoir behavior and current performance. However, such analysis being carried out separately is not being disseminated to the administrators of the state govts., and planners under the prevailing existing protocols of MOWR/CWC. 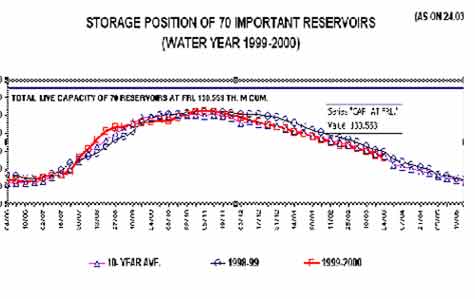 National/State Model – a new version
The above centralised RL&SCMS had limitations in providing the informatics to the state govt., regarding their reservoir level and capacity. Thus the state govt.,/Engineer-In-Chief (Irrigation Deptt.) were not in a position to monitor the reservoir level and its capacity in near real time environment of the state thus creating a lot of communication gap between the centre and the state. With the availability of the current technology of Internet and GUI environment, a new version called as a “NATIONAL/ STATE MODEL” has been evolved which will provide support to the state govts., in complete information management as per the CWC prevailing structure of management of reservoir level and storage capacity with complete administrative and management control such as addition/deletion of reservoirs, administration of user-id within the states, report generation, interface with the various govt. departments within the state etc. The new version is also being viewed with the vision of creating E-Governance in this segment with the following phases: The spread of reservoirs in the country with irrigation and hydel projects indicated as O and irrigation projects indicated as O 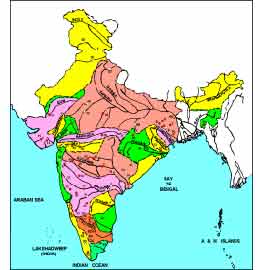 The main features of the new version of the “National/State model” of RL&SCMS are as follows: The RL&SCMS has a hierarchical control structure to support the national administrator (NIC-CWC) and the three tier administrative structure with special prevailadge as per logic have been evolve to maintain authorization and security, are as follows:

The high level privileges provided to the State/National level are as follows:

The high level privileges provided to the State User (State administrator) are as follows:

The privileges provided to the Reservoir User are as follows:

The report generation as per the National structure being followed at CWC, are as follow:

The report generation as per the National structure being followed at CWC would also be followed at state level as per the privilege provided to state users, are as follow:

Login Procedure
The product could be accessed through a Netscape/Internet browser at the address (Temporary Address). The application software recognizes each of the user allocated its privileges, and security aspects; hence provides access at the national/CWC level, state level or at reservoir and projects the respective area of application to the user concerned. The format of the national user/cwc user, state user and the reservoir user are provided as follow: 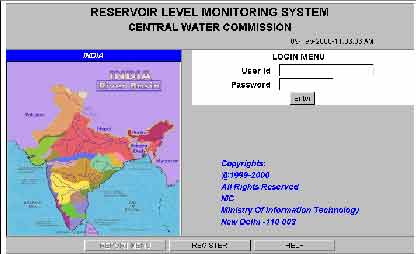 Acknowledgment
The author is extremely grateful for the support and guidance provided by Dr. N Vijayaditya, Director General NIC, Dr. B K Goirala, DDG(NIC) and Dr. Y K Sharma, DDG(NIC). The author is also grateful to shri Z.Hasan, Secretary, MOWR, shri A.D.Mohile, Chairman, CWC and shri C.D.Khoche, Chief Engineer (Water Management) for their continious support. The author also acknowledges the untiring efforts and the technical support provided by Mr. Shaik Mohammed, Programmer, in transforming the concept and bringing the product to the present shape in shortest possible time. Acknowledgement are also due to shri K.K.Bist, Systems Analyst for his continious support in updation and maintaince of current package and liasion with Water Management Dte. The author is grateful to Shri S M A A Jinnah, Engineer-in-chief (IW) Errum Manzil Hyderabad, Govt. of A.P. for his invitation to visit the state and have discussions with the Chief engineers of the projects of the state, which will be followed by discussions in Tamil Nadu and Karnataka state.