All satellite imagery is affected at some level by light-wave scattering and absorption from haze, water vapor, and particulates in the atmosphere. Every optical satellite in orbit peers at Earth through the same atmosphere, and each and every satellite image collected is impacted differently because atmospheric conditions are constantly changing.

Understanding and adjusting for the atmosphere is a fact of life in this business. That’s why we’re so excited to introduce DigitalGlobe Atmospheric Compensation (AComp), a game-changing tool that enhances the usability, quality and availability of our industry-leading satellite imagery. What does it do? Put simply, AComp lets us see through the haze and normalize imagery to a common standard across atmospheric conditions and geographical locations.

Why is AComp good news for users of satellite imagery and data? A picture is worth a thousand words:

The unprocessed image on the left was clearly collected on a day with challenging atmospheric conditions. You can make out the features on the ground, but there’s a uniform haze that reduces the quality of the image, and its usefulness for some applications. The image on the right uses AComp to clear the air. AComp makes this image better by mitigating the effects of the atmosphere between the satellite and the ground. By accurately representing the surface reflectance of the ground, AComp delivers the highest quality imagery.

Let’s look at this in another way. The sky is blue because of a phenomenon called Rayleigh scattering. When sunlight approaches our planet, it interacts with molecules in Earth’s atmosphere and is scattered into its constituent colors. The blue light scatters more efficiently, thereby saturating the sky with its color. 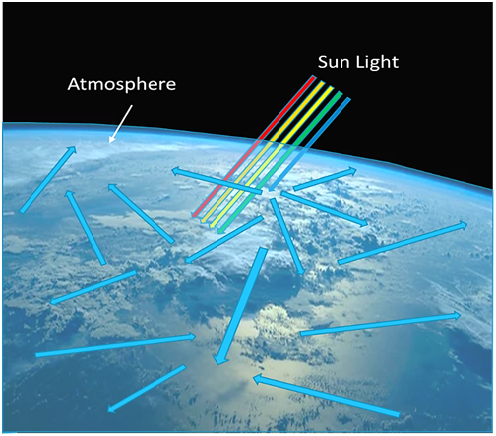 How does this relate to satellite imaging and AComp? From the perspective of the Earth’s surface, our atmosphere is a protective shield—and we’re all thankful for it. But from a satellite’s perspective, it’s a barrier to be crossed. When a satellite takes an image, the light reflecting from the ground is impacted by the atmosphere and can affect the visual aesthetics of the image. It’s analogous to placing a straw in a glass of water and looking at it from the side—the straw will appear to be bent or disjointed because the water, like the atmosphere, can bend, scatter, or refract the light. AComp significantly improves image quality by adjusting for this atmospheric scattering across diverse conditions.

The mapping industry has developed and used various atmospheric compensation tools requiring high and low levels of expertise with varying outputs of quality. Over the last several years, Fabio Pacifici, a Principal Scientist with DigitalGlobe, created the proprietary DigitalGlobe AComp algorithm. By using a pixel-based normalization of the digital numbers (DN) to a surface reflectance, AComp represents a significant improvement over the use of raw data and ensures consistency and full spectral fidelity. It promises real benefits to everyone who uses optical satellite data—from consumers of foundational images who will be able to solve real-world problems, to image scientists who need surface reflectance to have consistent spectral information to perform image analytics.

What does this mean for real-world geospatial challenges? Fabio Pacifici has validated the normalization of digital numbers to a surface reflectance in a series of studies. For example, urban change detection projects have the challenge of distinguishing between true changes and false alarms—a time-consuming proposition that can strain resources. Automated change detection typically uses change vector analysis (CVA) and/or principal component analysis (PCA). Both methodologies have been shown to result in extensive false alarms over paved surfaces and rooftops, thereby requiring additional work to manually validate each feature. The normalized imagery generates far viewer false alarms (see Fig. 1), resulting in a truly automated process that produces better results with less effort. 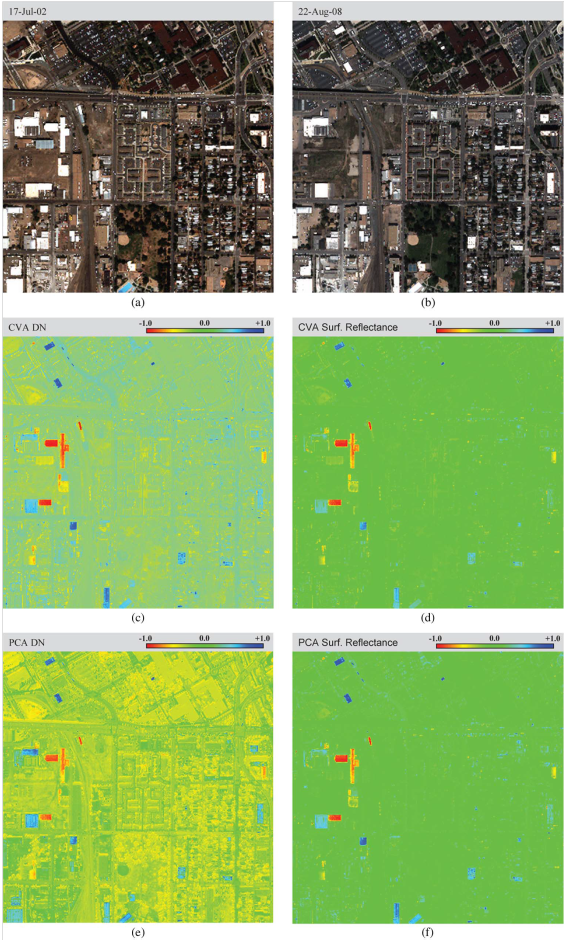 Let’s look even more closely. The charts below compare the multitemporal spectral signatures over the same rooftop from July 2002 to August 2009 between the raw (right) and AComp (left) imagery. The signatures of the raw data have the digital numbers normalized to 1.0 for simplicity of comparison to convey the surface reflectance values. The Aerosol Optical Depth (AOD) – a measure of the amount of sunlight absorbed or scattered by aerosol particles (dust, smoke, pollution) as the sunlight travels through the atmosphere – is also shown for completeness. In short, the AOD is inversely related to the visibility—the lower is its value, the higher is the visibility. Notice how the atmospheric effects (lower and higher visibility) influence the values of the raw imagery, whereas the normalized surface reflectance values are more consistent over time. This consistency makes possible the detection of three clear changes on the rooftop over time. 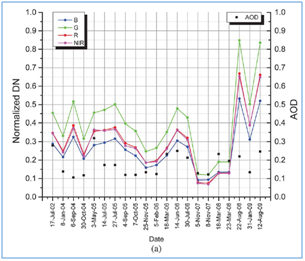 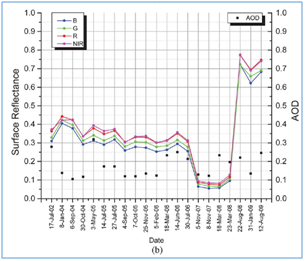 High-quality imagery gives you answers – and confidence – when you have critical questions. With the most sophisticated commercial satellite constellation in orbit, DigitalGlobe creates the world’s smartest images—giving you the confidence to make even the most difficult decisions. Adding AComp to our powerful imagery analysis toolkit will enable you to extract even more meaningful insights from our industry-leading content.

What are the benefits of AComp?

DigitalGlobe Atmospheric Compensation (AComp) cuts through the haze—giving satellite images a crispness and clarity that rivals the ground-level view.

• Image clarity. Removes the effects of light-wave scattering from haze, water vapor and particulates in the atmosphere.

• Automation. Allows images to be processed in bulk without manual intervention.