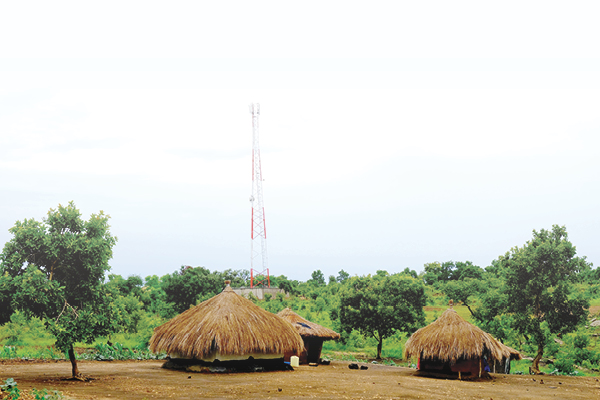 Earth observation has immense potential to support decision-making across the vast continent of Africa and to improve the life of every African. Digital Earth Africa (DE Africa) will be a continental-scale operational Data Cube for Africa. Taking freely available, analysis-ready satellite imagery as an input, the Data Cube will produce full-resolution decision-ready products available to one and all.

The United Nations Sustainable Development Goals (SDGs) are a global effort to address social, economic and environmental challenges across all countries by 2030. These ambitious goals require new approaches in using data, creating challenges and opportunities for earth observation. A massive continent with rich and diverse environments, Africa is under constant threat from Climate Change and environmental degradation, illegal mining, land degradation, water quality decline, deforestation and food insecurity. These challenges are taking their toll on communities and ecosystems.

Changes in the way we access and use data ­— a key transition of the Fourth Industrial Revolution — are enabling a fusion of technologies that support implementation of the SDGs. New possibilities for data analytics and visualization are emerging through the combination of human capability and advances in science and technology — including global observing systems, computer processing power, storage capacity, Artificial Intelligence and cloud computing. However, despite these advances there remain major barriers to earth observation delivering its full potential to improve decisions. Finding, accessing and processing earth observation data to produce decision-ready information remains a struggle for many countries.

Earth observation data and services have untapped potential to help address environmental challenges and development priorities, and to progress national and continental policy frameworks, including the Paris Agreement, the Sendai Framework for Disaster Risk Reduction, SDGs and Agenda 2063 — Africa’s master plan for transforming the continent into the global powerhouse of the future. Furthermore, with the increased quality, detail and availability of satellite imagery, earth observation now has the potential to benefit businesses, NGOs and individuals in their day-to-day decision-making.

The Data Cube (www.opendatacube.org) was first developed and operationalized in Australia (www.ga.gov.au/dea), where it is transforming the use of earth observations in government decision-making and private sector innovation. The Committee on Earth Observation Satellites (CEOS) promoted its use to other countries as a Cloud-based, open-source, data processing earth observation analytics platform. Earth observation Data Cubes are now being used worldwide to unlock vast archives of satellite data, allowing users to extract insights and information from these observations. Data Cubes provide an environment in which algorithms can be rapidly developed and applied to generate information products from the full earth observation time-series at continental scales. For example, trends can be detected, visualized and acted upon.

Much of the data used in Data Cubes is freely available, but Data Cubes reduce the data preparation and processing burden by at least 80%, allowing remote sensing experts to focus their attention on solving problems, rather than wrangling data. The Data Cube allows routine processing at continental scales with full resolution, moving earth observation into an operational role. Full time-series of images are accessed, producing more accurate and detailed information, and allowing processes to be visualized and understood. However, so far, Australia’s is the only continental-scale Data Cube.

In March this year, in Addis Ababa, Ethiopia, the Australian government and The Leona M. and Harry B. Helmsley Charitable Trust together announced funding to establish a Data Cube for Africa. The Digital Earth Africa Program (DE Africa) will develop a continental-scale Data Cube providing a routine, reliable and operational service enabling African nations to track changes across countries in unprecedented detail. With a land area of over 30 million square kilometers, four times as large as Australia, DE Africa will be the world’s largest continental Data Cube.

Funders are investing in DE Africa because of its potential for broad-scale transformation, across sectors and scales, from continental reporting to the lives of individuals.

“We invested in Digital Earth Africa because we believe it will be transformative for every country across Africa and for every person in Africa,” says Walter Panzirer from Helmsley Trust.

International satellite programs including Landsat (United States), Sentinel-1 and Sentinel-2 (Europe), and ALOS (Japan) will provide the analysis-ready Data needed by DE Africa. The Data Cube itself will use the Open Data Cube software, allowing African countries full control over the products that are generated by the system. DE Africa will also have access to skills, knowledge and open algorithms developed by the broader Open Data Cube community and will be able to leverage that international work to rapidly build capacity and adapt products for Africa. Once established, DE Africa will produce routine data products and services for the African continent that are freely available to all users, analogous to the operation of a weather service.

DE Africa will build on the achievements and lessons from the Africa Regional Data Cube (ARDC), an initiative spearheaded by the Global Partnership for Sustainable Development Data (GPSDD) and the Committee for Earth Observing Satellites (CEOS). ARDC developed Data Cubes for Sierra Leone, Senegal, Ghana, Kenya and Tanzania and demonstrated their value through a series of applications, including flood and drought hazard, land cover and urban expansion, agricultural responses to Climate Change, detection of illegal mining, and coastal change. ARDC demonstrated also that algorithms developed in other countries such as Australia can be rapidly ported to Africa and build capacity there.
As a Community Activity of the Group on Earth Observations (GEO), DE Africa will also benefit from global input and support, including from AfriGEO — GEO’s regional initiative in Africa. DE Africa will also align and work with other activities in Africa, such as the plan for Geospatial Information for Sustainable Development in Africa (2016-2030) and GMES in Africa.

Digital Earth Africa is in the first year of an ambitious three-year plan to lay the foundations for an ongoing service. Over the course of 2019, it will establish institutional arrangements, build partnerships, recruit staff, engage governments, develop a product roadmap, deploy version 1 of the DE Africa infrastructure and produce its first continental data product. Governance structures including an independent Board and a Technical Advisory Committee will ensure that priorities are set within Africa, and that DE Africa delivers information products that are needed and sought after to help address real issues.

Subsequent years will see countries directly benefiting from DE Africa’s tools and resources and developing a better understanding of how DE Africa’s continental data and information products can be targeted toward and used to address key national priorities. DE Africa is expected to mature into a continental infrastructure that will be utilized across all sectors, with new applications and innovations being developed by an engaged and active African Data Cube community.

For Dr. Adam Lewis, who is heading the DE Africa Establishment Team, the ultimate success indicator for DE Africa will be the emergence of an ecosystem of innovations, each taking the operational products from DE Africa and putting them to new and unforeseen uses. “Incremental progress is not enough — the visible benefits of Earth observations should be growing exponentially; if we as the international Earth observations community can remove the final barriers to the use of these data, that can happen; perhaps more so in Africa than anywhere else,” says Dr. Lewis.

We encourage you to find out more about this initiative by visiting: http://www.ga.gov.au/digitalearthafrica