Introduction
The polar ice, with its expansive maximum extent and large annual variability has a major influence on the global climate system. This is reflected by the fact that the global sea-ice has been rising about 2 mm a year over last century. Ice acts as insulating blanket between the relatively warm ocean and colder atmosphere. Sea-ice thickness determines the amounts of energy exchange between the air and the ocean by drastically modifying the transfer of heat, mass and momentum. Moreover, the feedback mechanism between sea-ice extent and atmospheric temperature tends to amplify climatic anomalies.

The ice cover serves as a seasonal buffer between the atmosphere and ocean. In the winter, the growing ice releases cold dense brine into the ocean resulting in convective overturning, which causes the heat to be transported to the surface. In summer, the melting ice contributes to the fresh water surface layer, which affects deep-water convection. Thus the presence of sea-ice also affects the biological activities in the ocean.

Ships navigating through high latitude seas are often faced with obstacles of pack ice and moving ice floes. Ice breakers are designed to facilitate travel in these areas, but they require knowledge about the most efficient and effective route through the ice. Satellite images give a large view of the area in front of a ship and will allow an experienced interpreter to estimate the age, type and concentration of the ice. With radar sensors, images can be acquired and sent to the ship by communications satellites, so the captain can see the most recent ice conditions in front of his ship. Thus, it is essential that our planet’s snow and sea-ice be monitored on a global scale by remote sensing from satellites.

Observations from MSMR data over polar region
While analyzing the spatial and temporal variation of brightness temperature data obtained from IRS-P4 for Grid-1 (150 km resolution), an atypical trend was observed for a location in Beaufort and the Siberian Sea (near latitude 75° N and longitude 135°E). There was a sharp increase in brightness temperature (Tb) by an amount of 60-70 degrees for all frequencies and polarizations during a period of 15 days in the month of October 2000 [Figure 1a and Figure 1b]. Also, the polarization ratio changed by a considerably large amount [Figure 1c]. A monthly variation map for October 2000 was made using IRS-P4 data for Grid-3 (50 km resolution) to have a closer look [Figure 2]

(a) for Horizontal Polarization, H

(b) for Vertical Polarization, V

(a) for Horizontal and Vertical Polarizations H and V

(b) for Horizontal/Vertical Polarization ratio H/V

Figure 2. Monthly Variation for October 2000 of Brightness temperature for location near latitude 75° N and longitude 135oE for frequencies 18 and 21 GHz

In order to verify the extent of this phenomenon and to eliminate any flaws, if present, a temperature brightness map was made for the dates 5-6 October 2000 and 21-22 October 2000 for which this sharp increase was found to have occurred. It was found that this was not local but extending from latitudes 73°N to 78°N and longitudes 115°E to 145°E [Figure 3a and 3b]. Also, a map made for dates 21-22 September 2001 showed that this phenomenon is recurring and not a permanent change. [Figure 3c] 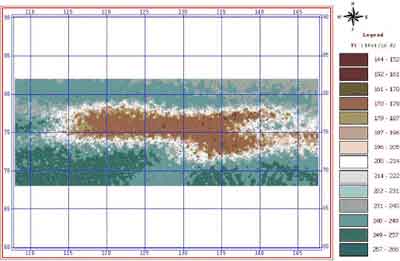 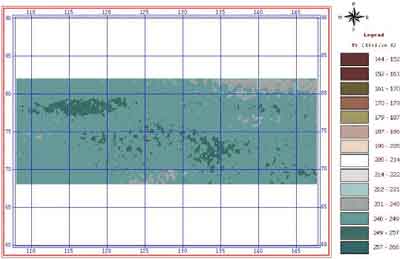 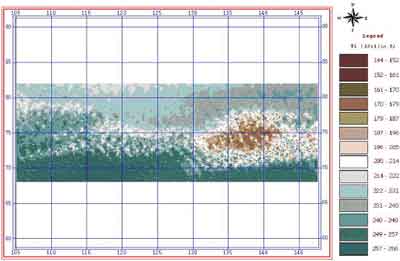 Figure 3. Brightness Temperature Map for area extending from latitude 73°N to 78°N and longitude 115°E to 145°E
After noticing that this phenomenon is taking place in a large region, the polar map of the Northern Hemisphere up to latitude 68oN for brightness temperature (18V) was made using data for Grid-1 (150km resolution) and it was found to be extending to some other regions. [Figure 4] 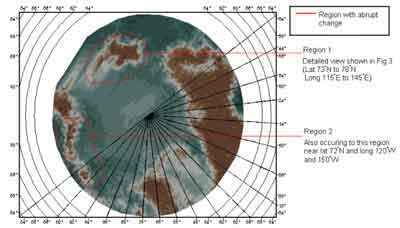 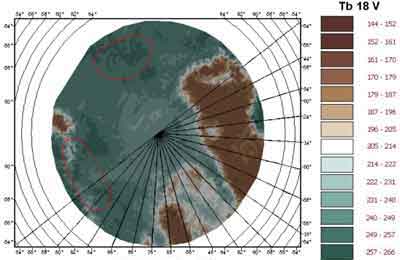 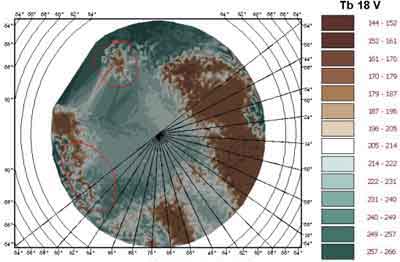 Figure 4. Polar Brightness Temperature map of Tb (18V) up to latitude 68oN In the process of complete analysis of the phenomenon, Aerospace Department, University of Colorado provid ed U.S. National Ice Center charts for the month of October 2000 [Figure 5] for East Siberian Sea, one of the areas where the Tb change was noticed. Figure 5. Ice Analysis Chart for East Siberian Sea (latitude 70°N to 80°N and longitude 135°E to 175°E [Source: U.S. National/Naval Ice Center]
Conclusions
The polar brightness temperature maps [Figure 4] show that the Tb has increased by about 60-70 degrees over a short interval of 15 days after which it remains constant for about eight months and then decreases gradually. The gradual decrease in Tb from autumn through winter is a result of the accumulation and evolution of snow on the sea-ice. The ice charts help to infer that the sea-ice accumulation takes place with in a short time and it takes about a year to become ice-free ocean. The rates of freeze-up and ice retreat vary somewhat from year to year, but the decrease is more gradual in spring through summer. In the latter case, some of the changes in Tb are due to surface melt and accumulation of melt water on the sea-ice. The patterns (changes in Tb, polarization, and spatial patterns and location) look almost like those associated with the change from ice-free oceans, to the oceans covered by sea-ice.

It is supposed that the same pattern must be getting repeated every year. However, further work needs to be done using SMMR and SSM/I data. The brightness temperature maps of whole polar region can be prepared at regular intervals of about 15 days to locate some more areas having similar phenomenon of rapid polar sea-ice freeze up. Moreover, comparison of the results so obtained with data of some more years would throw light on the undiscovered facts.

Thus the determination of the kind of ice present in the sea is extremely significant for shipping and transportation, as it would save huge amounts of life and property from being lost in any accidents caused by icebergs and glaciers in the higher latitudes. Further work in this direction would therefore be useful in guiding ships in the future by helping them to follow the path free from all obstacles and lingering hazards, using communication satellites. Efforts to prepare a model for sea-ice thickness determination and a thermodynamic model to predict the global climatic changes can also be made.

Table 2. GPP and Frequencies used for Grid in IRS-P4