The Asian Regional Network Conference of the United Nations ICT Task Force was held on 25 April 2002 in New Delhi. The meeting brought together over 200 key government, private sector, and academic leaders from China, Korea, Malaysia, Japan and UK to discuss ICT for development in Asia, and to explore new high-technologies that can significantly impact the lives of the underprivileged and underserved. The event was sponsored by Media Lab Asia, the UN ICT Task Force, NASSCOM, TiE, CII, MAIT, and the Ministry of Communications Information Technology, Government of India.

The conference was organised by Media Lab Asia and the Ministry of Communications & Information Technology, Government of India and focused specifically on private sector and academia’s involvement in developing world-class technologies that will make a difference. Among the many dignitaries were Chief Guest Shri Pramod Mahajan, Hon’ble Minister of Communications & Information Technology and Parliamentary Affairs, Government of India, Guest of Honor Dr. MA Songde, Hon’ble Vice Minister, Ministry of Science and Technology, People’s Republic of China, Shri Rajeeva Ratna Shah, Secretary Department of IT, Ministry of Communications & Information Technology, Government of India, Dr. Brenda McSweeney, UN Resident Co-ordinator, India and Prof. Alex Pentland of MIT. The People’s Republic of China sent a strong delegation composed of experts from government, industry, and academia. The UN ICT Task Force Asian Regional Network held a meeting in Shanghai, People’s Republic of China during the period 27-29 March 2002, in which government officials from 15 countries built a consensus on using ICT for development. Several key private sector leaders were joined by Media Lab Asia, MIT Media Lab and the Economic and Social Commission for Asia and the Pacific (ESCAP).

The United Nations ICT Task Force was launched by UN Secretary-General Kofi Annan on 20 November, 2001, to help harness the power of information and communication technologies for advancing the internationally agreed development goals of the Millennium Declaration, particularly halving the number of people living in extreme poverty by 2015. To this end, it serves as a bridge between the ICT and development communities and examines how to use ICT to leverage and enhance development programmes and projects. The Task Force provides a global forum for integrating ICT into development programmes and for addressing such issues as strategy, infrastructure, enterprise, human capacity, content, applications, and smart partnerships. The Task Force helps coordinate, mobilise and link existing and new public and private resources, at national, regional, and global levels, to comprehensively address the issues of connectivity, capacity, and content with a view to promoting universal, affordable, and meaningful access to ICT, particularly for the poor and disadvantaged. Opportunities for preventing, reducing and eliminating gender disparities in participation in the ICT sector, and in access to and use of ICT for development are being pro-actively identified.

In keeping with its mandate, MLAsia proposes to concentrate on low cost devices, connectivity, and local language content, through three precompetitive industrial consortia called Bits for All, Tomorrow’s Tools, and The World Computer:

Bits for All focuses on how to bring digitally enabled services to everyone on earth.

World Computer is developing a computer for the educationally and socially disadvantaged, and for communities.

These three technical themes come together in a fourth initiative that seeks to find a synergetic combination of technology with societal need, called Digital Village.

Digital Village attempts to realise Mahatma Gandhi’s vision of a sustainable village through culturally appropriate uses of new world class technologies. Our goal is to create a sustainable digital ecology that maintains traditional values and community while opening economic and expressive opportunities. 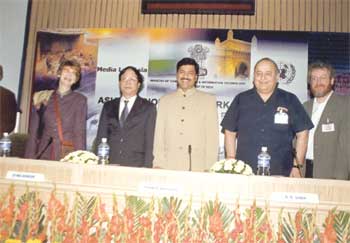 Simultaneously, an exhibition cum demonstration of ongoing projects initiated and supported by MLAsia showcasing innovative applications of ICT for socio-economic development was organized. Participants included the MLAsia research hubs/labs at IIT Kanpur, IIT Bombay and IIT Khargpur and MLAsia research partners like JIVA, and Center for Spatial Database Management Systems. Demonstrations were on handheld computers, low cost wireless communication devices, user interfaces for illiterates and speech interfaces in Indian languages. Several key leaders from the government, industry, and academia expressed their deep appreciation of this effort. They found the sessions both helpful and stimulating, and thanked the action-oriented panelists for their meaningful insights. In view of the convergence of objectives between the various stakeholders, the industry and government leaders committed their unconditional support to the efforts of UN ICT Task Force Asia Regional Network, and Media Lab Asia. The participants decided that all stakeholders will work closely together in the coming months to develop and deploy new path-breaking technologies that will profoundly impact the lives of the underprivileged and underserved communities of Asia.