Introduction
Coral reefs are important resources for the great many tropical country. Reefs and their habitat associated sandy beaches are important attraction to tourist, major sources of income of tropical countries. Indonesia is the larges tropical archipelagic nation in the world, with a coastline stretching 0ver 95,000 km around more than 17,000 islands. An expensive group of coral reefs protect these islands. Indonesia has approximately 51,000 km2 coral reefs (Burk et al., 2002), this number does not include reef in remote areas that have not been mapped. For the management of specific coral reefs resources, it is first necessary to identify the reef to be managed A monitoring program can be provide information on the diversity of site, condition of particular habitats and changes in environment.

With respect to this situation, remote sensing may provide the most feasible mean for monitoring and management of coral reefs, particularly for insular (archipelagic) countries. Remote sensing can identify a number of environmental variables associated with habitat that are potential indicators of resources distribution and abundance such as coral reefs, algae and sea grass.

Many researchers ( Khan et al., 1992; Luczkovich et al., 1993; Zainal et al., 1993) have examined the usefulness of Landsat data for inventory and mapping of coastal habitats such as coral reefs, however most of them used the oldest Landsat series such as Landsat MSS and Landsat TM (4 and 5).

In this present study, Landsat 7 ETM+ has been used for investigating coral reef habitats. GIS technique and field data also considered in this study. Water column correction algorithm has been employed to enhance the image (Green et al., 2000; Mumby et al., 1998). This algorithm has not been widely adopted in term of mapping shallow water (Mumby et al., 1998). In addition, band ratio and principal component analysis also applied in this study. In order to classify reef habitats from the image, unsupervised classification using K Mean class was undertaken to identify reef habitat base on water column correction image. An error matrix was used for additional interpretation of classification accuracy within and between each reef habitats.

Study Area
The study area is located around three major islands (Mensanak, Medang and Benan Islands) and several smaller islands in Riau Archipelagos, Riau Province. False Color Composite (FCC) 421 (Figure 1) shows the study area. It stretches from latitudes 0°20′ – 0°30′ North and longitudes 104°20′ – 106°35′ East. This area is situated approximately 120 km Southeast of Singapore. The study area is one of the Coral Reef Management Program (COREMAP) areas. Major habitats in this area are representative of the general environmental in the Riau Archipelagos. Therefore the findings of this study could be useful for large mapping of coral reef habitats along the islands. 
Methodology
A Landsat 7 ETM+ image (path 125 row 60) that covered the study area, acquired on 6 September 2001 was used in this study. The image was system corrected using UTM 48 and WGS 84 as the projection and reference ellipsoid, respectively.

The field survey (in situ) data is very important when working with remote sensing images. The field data will be used to compare ground feature and corresponding image feature. This study was concentrated on the reef top areas in which water depth varied between 0 – 5 m. The Rapid Reef Assessment (RRA) technique (COREMAP, 2001) was used in this study. Distribution of sampling reefs were determined using GIS to randomly allocate stations to sample on the reef top. The benthic data was recorded by the percentage coverage.

Several enhancement techniques have been used in this study such as band ratio, principal component analysis (Khan et al., 1992) and water column correction (Mumby et al., 1998; Green et al., 2000). Unsupervised classification method using K-mean classification was carried out in this study based on the water column corrected image. To assign meaningful labels to the spectral classes, ground truth data was used. In this study, through the used of hierarchical cluster analysis and simple statistical approach (analysis of variance, ANOVA) as a guide to class amalgamation and selection of the final groups, which correspond with bottom types. The reliability of reef habitat classification has been tested using error matrix and kappa coefficient.

Result and Discussion
The complexity of coral reef habitats is one of the problems when dealing with mapping benthic habitats using remote sensing. The benthic communities where the reflectance spectral of the object commonly smaller than spatial resolution of view most satellite sensor (i.e. 30 m spatial resolution of Landsat 7), the spectral reflectance of the individual pixel will generally not represent the reflectance of single object but rather mixed of reflectance of two or more object present with ground resolution. Significant mixing of several different benthic types within relatively large pixels compounds the issue of classification inaccuracy. Because the complexity of the object represent in the ground resolution, some of the object are mixed together to make ease for the analysis. 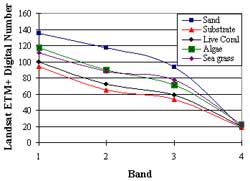 Figure 2. Spectral signature of benthic habitats
Enhancement Technique
The selection of color composite in this study was based on the calculation of Optimum Index Factor (OIF); band combination 123 has the highest OIF value. It can be explain because of those three bands have the capability of penetration into water column. The highest values of OIF show the most potential information contain in that combination

Based on the OIF value we have been calculated band ratio and principal component analysis. Both techniques did not give good result. Ratio of band2/band 1 could be used for separating sand habitat and other habitats (live coral, algae, substrate and sea grass) and ratio band 3/band 1 shown more information of other benthic habitat such as live coral, sea grass and algae, but still difficult to separation among them. Using principal component analysis, the identification of benthic habitats was easier than using band ratio, which not only sand but also other benthic habitats such as coral, substrate and algae/sea grass can be identify. However, the separation of reef habitat zones still difficult or unclear border between zones has been found using PCA method.

Reef Habitat Classification
Water column image has been calculated base on equation: ln (L1) + (0.639*ln(L2), where, L1 and L2 is Landsat ETM + band 1 and band 2, respectively. Based on the water column image, this study was successfully classified image into eight classes. The image classification of study area was obtained by using K Mean (Unsupervised) classification. Eight classes have been reduced into six classes based on cluster analysis. The six classes have been tested using analysis of variance. All the benthos among the class was showed significant at level 99% (sand, substrate and live coral) and 95% (bio habitat). The statistical results of ANOVA suggest that the distribution benthic of each reef habitats were unique population. In other word there is significant different in substratum and biota among reef habitats. Table 1 and Figure 3 are shown the six classes of reef habitat. The following is a description of the major reef habitat zone mapped in this study

Reef Habitat 1 – Bare Sand Zone: Sandy zone was found the dominant reef top benthic habitat in this study.
Reef Habitat 2 – Exposed Sand / Substratum Zone: This reef zone occupied the smallest area of entire reef habitat and there was scattered along the reef area.
Reef Habitat 3 – Reef Crest Substratum Sandy Zone: This zone was characterized by high live coral colonies. However, the coverage of live coral is smaller than reef crest/submerged reef zone (reef habitat 4).
Reef Habitat 4- Reef Crest / Submerged Reef Zone: This zone consisted of large/very high live coral colonies with few and narrow separation by sandy area. In addition, substrate also found high in this zone. It was indicated there were activities regarding with destruction of coral reef.
Reef Habitat 5 – Substrate Sandy Zone: This zone is dominated by substrate cover and followed by sandy cover. Substrate sandy zone occupied the second large area, which is approximately 24% coverage of the total reef area.
Reef Habitat 6 – Reef Flat Sea grass / Algae Zone: Bio habitat (sea grass/algae) cover was found large in this zone. According the proportion of the substrate and sand, it was indicate that sea grass/algae was grown on the substrate and sand and also between the live coral.
Table 1 Descriptive for the field survey data by reef classes obtained from the classification of Landsat ETM + satellite imagery Figure 3. Map of Reef Habitats
In this study, the accuracy of the classified image was tested using 20 ground truthing sites throughout the study area. An overall accuracy of 76.12% was determined by dividing the total number of correctly classified spectra (the sum of the count along the major diagonal) by the total number of spectra considered in this study. In addition, Kappa analysis also calculated. Kappa coefficient (KHAT value) of 69.64% was achieved in this study.

Conclusion
This study attempted to investigate the applicability of Landsat 7 ETM+ for mapping coral reef habitat. Due to the complexity of coral reef environment and the spatial resolution of Landsat 7 (30 m), some benthic habitat have been mixed together for easier to classification such as sea grass and algae become bio habitat and dead coral, terrestrial rock, dead coral with algae and rubble become substrate. Several techniques related to image enhancement have been applied for getting more information about benthic habitat.

Water column correction image has been used for image classification. Using hierarchical cluster analysis, the study achieved six classes of reef habitat base on the zonation. The reliability of reef habitat classification has been tested using error matrix and Kappa coefficient, which is achieved 76 % and 0.68, respectively. This overall accuracy indicated the reef habitat has been achieved in this study is reliable.

Based on the result was found in this study, it was indicated that using Landsat 7 ETM+ with the spatial resolution of 30 m, sand could be separated with other benthic habitat easily. However, difficultness separation of bio habitat to other benthic habitat was found in this study. Separations between live coral and sand more ease than live coral and bio habitat, which is on the image both of them appeared relatively dark.

Acknowledgements
The Authors wishes to acknowledge the funding support of the Ministry of Agriculture, Integrated Tropical Coastal Zone Management Program-AIT and AMSAT Indonesia. And also would like to thank Dr. Brian Long for his assistance during the field work preparation, and Mr. Sam Suherman and Mr. Muin for their collaboration during the field work in January 2002.