Background
Statistics collected by the US Bureau of Labour Statistics indicate that the productivity of the US construction industry has declined by over 20% since 1964, whereas non-farm labour productivity has increased by over 200% in the same period. 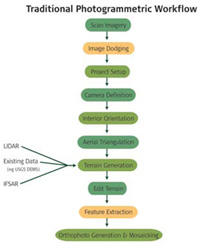 Several years ago the National Institute of Standards and Technology (NIST) commissioned a study to attempt to quantify the efficiency losses in the U.S. capital facilities industry resulting from inadequate interoperability including design, engineering, facilities management, and business processes software systems and redundant paper records management across the entire facility life-cycle. $15.8 billion in annual interoperability costs were estimated for the capital facilities industry in 2002. In addition additional significant inefficiency and lost opportunity costs associated with interoperability problems were identified that were beyond the scope of the NIST analysis which suggests that the $15.8 billion cost estimate developed in the study is likely to be a conservative figure. It is interesting that it was determined that two-thirds of these costs are borne by owners and operators, predominantly during ongoing facility operation and maintenance.

Facility Lifecycle
The traditional facility lifecycle involves planning, architecture, engineering, construction, operations and maintenance, and decommissioning. Facilities include buildings, highways and roads, network infrastructure such as telecommunications, power, water, wastewater, and gas networks. There are many different disciplines with discipline-specific software applications that are required to build and maintain a building or a network. Each forces users to re-model the building or network every time – focusing on the express role each discipline plays in the lifecycle.  The software applications they use include architectural design applications, civil engineering applications, land development applications, and geospatial applications. Traditionally each discipline has been isolated from the other and each has maintained its own silo of design and engineering information. This has created a night mare for emergency planners and responders and others who need immediate and seamless access to building interior and exterior, road, and geospatial information. For a long time, this was how things were done. However, the facility lifecycle, whether we are talking about a building or a telecommunications network, is being compressed. In addition organizations are much more aware of the costs of operating and maintaining facilities, which over the lifetime of the facility are often 90% of the total cost of the facility. At the time of an emergency, there is little time to sift through the multiplicity of design and geospatial data to find information about the h/v ductwork or plumbing on the 25th floor, where the emergency is occurring.

BIM/CAD/GIS Convergence
One of the most exciting things that is happening in the design software world is the convergence of architectural design, engineering, land development, civil engineering, construction, and geospatial disciplines, commonly referred to as BIM/CAD/GIS convergence. The objective of BIM, CAD, and GIS integration is to develop a framework of interoperability across the lifecycle of building and infrastructure investment involving design, construction, and operation.

Convergence also means that during the post-construction phase of a facility the ability to integrate data from different applications and disciplines provides important benefits for maintenance staff and emergency responders who will be able to have immediate and seamless access to infrastructure data inside, outside, and underneath urban structures to enable them to deal rapidly and effectively with emergency situations. 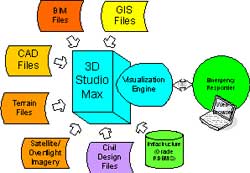 The good news is that most, if not all, of the basic geometric data that is required already exists in precision digital form, as architectural plans in the form of CAD drawing files, network infrastructure databases, and geospatial vector and raster data. Increasingly design data is bring captured in the form of intelligent databases which are model-based, for example building information models (BIM), and incorporate the concepts of classes of objects, each class having a commons set of properties, relationships between object, rules for relationships between classes, and styles which determine how to render each class of object.

To leverage this data, it needs to be integrated into, a single, interactive model supporting 3D visualization so that you can visualize and analyze all aspects of the facility, inside, outside, and underneath, quickly and easily. This can be achieved if the integrated model is intelligent, for example, recognizes different classes of objects such as skeletal structure, walls, floors and ceilings, plumbing, heating and ventilation, telecommunications and utility networks, and terrain.

The objective is to integrate the widest range of precision data – including computer-aided design (CAD), geospatial (GIS), 3D modeling, architectural, and subterranean utility infrastructure data – to deliver a precise synthetic environment that can be used to exploit the inside (utilities, HVAC systems, furniture, elevators, walls, doors, windows, and structural details), outside (aerial utilities, full city blocks of 3D detail, road access), and under (underground water, wastewater, gas, power, and telecommunications systems) of an urban location and make this available in a variety of visualization engines, including commercial gaming engines. The objective is to leverage the precision data that most owner/operators already have and to re-use it across the entire facility lifecycle including facility operations and maintenance.

The integration of model-driven design, building information modeling (BIM), 3D visualization, CAD, geospatially-enabled relational database management systems (RDBMS), and other geospatial technology has important implications for emergency planning and response and urban planning. For a first responder it means that when they enter a building they will no longer go in blind, but will have at their finger tips a simulated digital environment which will include all of the architectural and engineering design data for the building as well as the surrounding cityscape including underground infrastructure.