Ayon Tarafdar,
[email protected]
Map India 2005 was the 8th Annual International Conference and Exhibition in India, in the field of geographic information technologies like GIS, GPS, Aerial Photography and Remote Sensing. With a mission to foster the use and spread of geospatial content, Map India 2005, in three days of discussions and deliberations, brought together all stakeholders in the geospatial domain on one platform. Map India 2005, held on 7th – 9th February 2005 at Taj Palace Hotel, Delhi, was jointly organized by the GIS Development, Centre for Science, Development and Media Studies (CSDMS), Survey of India and the Indian Society of Geomatics. The Annual Convention of the Indian Society of Geomatics (ISG) – Geomatics 2005 was held in conjugation with Map India.

The Theme
In the midst of fast-paced economic growth, the Indian mapping community, over the last five years has passed through crests and crevices. In the process, a ‘direction of consolidation’ has emerged. All efforts of development that encompass the basic needs of infrastructure, manufacturing and utility services found focus. Map India 2005 had a theme – ‘Back to Basics’ and tried to highlight the major achievements and pitfalls in the growth of geospatial sciences in India. It attempted to portray and assess the potential of the physical infrastructure and utility sector. Geomatics 2005 had a theme of ‘Geomatics technologies for bridging the digital divide’.

Participation
The high profile participation once again reinstated the significance of the Map India platform in India and its surrounds. In the history of Map India, this year the event had a record crowd of 1631 delegates including 473 visitors. Delegates attended various seminars and technical sessions; each designed and conducted by domain specialists and experts. Of the total registered 1158 registered delegates, 1117 were from India and 41 from overseas. Delegates represented 25 countries of the world. In all, 245 authors and co-authors were among the participants. The conference received 371 papers in total and 229 papers were presented during the conference. In total, 40 exhibitors displayed their products and services. Map India 2005 also had the opportunity to have a high profile Canadian delegation with government and industry representation that reinstated the emerging Indo-Canadian strong ties. 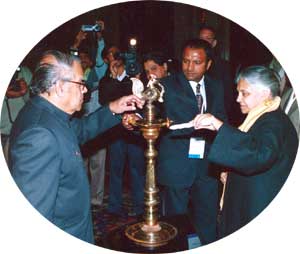 In the Inaugural session, Dr M P Narayanan welcomed all participants and set the tone for the conference. He expressed his condolence for the ones affected in the Tsunami disaster and observed silence. He then drew an interesting corollary between the recent Tsunami, the NSDI initiative of India and the geospatial sector of India. After this Dr P Nag mentioned his support for every cause of the mapping industry. He talked about the changes and developments that are underway in the Survey of India. Ms Lucie Edwards addressed the gathering with her encouraging words for India and spoke with confidence on the role of geospatial sciences for its development. She talked of Canada’s history of utilising GIS. In his keynote address, R S Pawar mentioned of innovative examples of how science has contributed to human lives. In perspective of the trends of the IT sector in India, he mentioned that for the future, GIS will be the central force behind ‘informatics’.

After this Ms Sheila Dikshit graced the occasion with her inaugural address. She spoke on the growth of Map India over the year and congratulated the organizers for the dedicated work and emphasized the need of support and expertise of the industry. K K Singh, on behalf of the industry spoke about the way industry has matured over the years and how it is now in a position to take on challenges.