1. Introduction
Consider studying a satellite remote-sensing image of bush fire or forest fire. The image is colored-coded and one is interested to know the percentage of the area on fire in relation to a larger surrounded area. The shape of the area is usually irregular. In the absence of any proper tool, the two areas can only be estimated by crude eye inspection. Of course, a more accurate method of calculating the areas can be done by manually tracing the required regions on a piece of graph paper and then approximating the areas by counting all the small whole squares plus all the fractional portions. This will take up a lot of time. Moreover, a small estimation error can mean a large actual error because of the vastness of the landscape.

Our objective here is to present novel techniques which can compute the percentage accurately using a PC. The image under study must first be scanned into the PC, or is captured in a digital form which can be stored in the PC. The proposed algorithms can count the number of pixels of an enclosed region on the computer screen in order to obtain the area.

2. Algorithms
Area calculations based on specific mathematical representations have been explored by some researchers [1]-[8]. The two techniques which we propose are: (i) the line-scanning method, and (ii) the contour-gyration method. They are more general than the existing methods. Furthermore, it is very easy to implement and apply the methods. As long as an image can be displayed on a computer screen, the area of any specific region can be calculated.

2.1 Line-scanning algorithm
The basic idea is to scan the area in range line by line, and count all the valid points (pixels).

2.2 Contour-gyration algorithm
The basic idea is to traverse the entire region of interest from an interior point which acts as the starting point, under a specified rule. If there is no path, retreat a step to find a new one until eventually retreating to the starting point. All points traversed are counted to make up the area.

4. Results
As a first example shown in Fig.1, the percentage of the area of the small enclosed region in the middle with respect to the larger enclosed area is 48.1%. The single-limit method of the line-scanning algorithm outperformed all other methods. It took only 0.72s on a Pentium III machine to compute the required result. Fig.1 Relative percentage of area calculation
As a second example, consider the aerial image in Fig. 2(a). In order to compute the relative designated area with respect to the darken area, two colors are used to shade the required regions first, as shown in Fig. 2(b). Then we apply one of our algorithms to compute the relative percentage. The value is 11.7%. That is, the darken area (green colour) occupies 13.1% of the designated area (blue plus green colours). The time to compute this value takes only 1.98 sec. 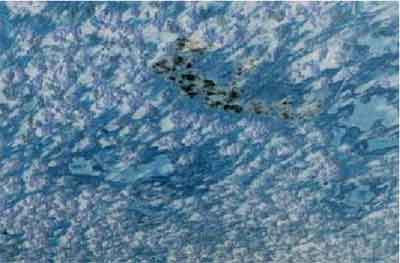 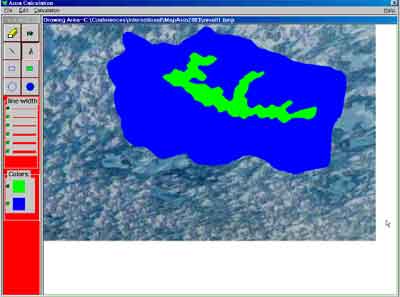