“Ask the Possible of the Impossible, ‘Where is your dwelling-place?’ : ‘In the dreams of the Impotent’, comes the answer.”
Rabindranath Tagore

Achieving a certain level of social and cultural resonance is critical to any effort that seeks not only to develop a community but also to engage the population with technology. Most communities have not traditionally enjoyed the benefits of modern technologies. Hence one has to remember that the advent of technology, as decision-support for development can perceive constraints of basic acceptance from any community. Therefore, while searching for effective strategies to diffuse computer-based technology, it is incumbent upon designers and planners to ensure that the infrastructure is well suited to the ‘interests’ of end-users and those of the society at large. When people can readily see the benefits of these technologies in improving their life, and their community, they will embrace them faster, thus achieving some measure of resonance with their social and cultural milieu. However, what is often left aside if the issue of whether a digitally literate community is better than a traditional one. In other words, is there a need to sensitise communities if local indigenous practises can solve matters easily? At this point it is imperative to briefly address the basic concepts of a ‘community’ and ‘community GIS’.

Understanding a community
There are numerous definitions of the terms ‘community’ and ‘neighbourhood’. In the given ambit of their differences, the underlying similarity in all definitions is the necessity of the presence of a common binding factor. Hence a community is a group of people having a set of common factors that bind them in some particular dimension. This binding factor can range from ethnicity, nationality and religion to business interests, political agendas and personal habits. An interesting related discourse is on Gemeinshaft and Gesellshaft (Tonnies,1988). Communities that are not geographically bound but evolve out of functional linkages (often invisible) are Gemeinshaft communities. Units of such communities are placed in different hierarchical positions networked in space in a manner that enhances efficient production of goods/services. Such a community generally shares bonds as in a professional organisation / company, driven by the motive of service, production or profit. Gesellshaft type communities are differently constituted. Here a territory has a crucial role in the formation of the bond. Such communities generally are based in the same area sharing a set of resources, having common issues, needs and are bound by factors like tradition, culture and social bonds. A family is an ideal unit of such a community (Tonnies,1988). First type can be classified as ‘functional communities’, whereas the latter ones are of a ‘territorial nature’. Hence the first crucial issue is to understand which type of community we are actually addressing or aiming to satisfy when we talk of ‘Community GIS’.

Community GIS
GIS is a strong tool, which stores spatial as well as non-spatial data digitally and establishes a link between the two. Resultantly it produces not just maps but an information system, which can retrieve, analyse and represent the stored data in desired ways. It can be utilised in numerous applications like planning, rural development etc. A digital database also has the advantage of easy cost-effective updating, transparency, rationality and strength of complex analysis. Community GIS is such an information system, which is totally for a community. Such a system ideally should be ‘by, for and of’ a community. In other words, such an exercise shall not only involve community through participatory methods in the database generation, assimilation and analysis but also essentially address the needs, problems and priorities of that particular community. However the crux of ‘community GIS’ as promoted in developing situations is that which aims at a territorial and not a functional community, since it promises to address human and physical development and does not seek to enhance profit generation and production of goods. Hence it is crucial to understand whether territorial communities do require a digital intervention rather than assuming that they necessarily do.
Communities of the developing world
Let us consider the following basic realities about developing nations.

In wake of these realisations and the fact that about three-fourth of the developing world’s population still live in rural areas, what emerges is a totally different dimension of priorities, aspirations, background and culture. The underserved communities of the developing world (which form the worlds majority) place high priority on, concerns of access to shelter, basic nutrition, access to basic health facilities and basic services of drinking water, sanitation and work. Such communities, that have over decades developed indigenously on their own, patterns of surviving with the odds and finding local solutions to their needs, have a different set of wants. Such wants may be addressed by in-depth analysis of GIS, but once again, one needs to alienate the role of GIS at a different strategic level and understand that there might be no actual need of ‘Community GIS’.

The need for Information Systems
In the wake of renewed global emphasis on local level planning and participatory decision-making, the aspects of proper knowledge, detailed information and impartial analysis are necessary and critical. Also considering the inherent drawbacks in the developing world, as discussed above, the need for efforts that promote transparency is unquestioned. Technology and GIS come with the promise of enhancing transparency, rationality and lucidity. It is an approach that is rooted in the theories of social constructionism and cultural constructionism (Shaw, 1995), and the practice of asset-based community development (Kretzmann et al, 1993). Hence the role of information technology in development is imperative in many ways. However, the nature, strategic level and scale in which it needs to be introduced in the society for its effective use and acceptability are the fundamental subjects to be addressed. A number of critical questions come up at this juncture,

The question of acceptability
Communities of the developing world are loaded with various critical agendas; the motive being upliftment of living standards. With regard to various strategies of human and physical development, GIS does have a positive role to play. However, making a community to take up the technology might see basic practical obstacles, as follows (Carver, 2001),

What benefit does GIS bring and what is their role?
A clear understanding of the ‘insiders and outsiders’ of Indigenous Spatial Knowledge (ISK) and Indigenous Technical Knowledge (ITK) as discussed by McCall is essential to address this query. It may be attractive to assume, by many, that IT and GIS based spatial knowledge ought to be equitably distributed for many of its ‘far reaching positive effects’, but this can be argued (McCall, 2002). GIS can certainly shape a better development mission but a community doesn’t necessarily have to take up GIS technologies as untapped indigenous knowledge is already found in most communities as (McCall, 1988),

Documentation of this knowledge is essential through their participation but its analysis with IT and GIS is an aspect, which may not be the focus at the community level. The actual impact of GIS analysis for development works gains critical mass at a slightly higher level, which can be a cluster of communities or a group of villages. At the next level one can actually integrate, compare, judge and develop options for thrust areas and then properly attend to issues. However, one has to understand that to build the regional level database one needs to start at grassroots. Hence, Community GIS may not give any tangible direct benefit to the communities at the family level. Yet, its component of database generation at the community level, with local participation can create more aware and interested communities. Hence one should clearly understand that at village / community level, GIS shouldn’t attempt or promise to provide tangible benefits to the lives of the communities.

What is the community’s motivation?
A critical paradigm of reasoning, before assuming that community development essentially needs GIS, is to deliberate upon the incentive that the communities have to accept technology. Practical sustainability and success is only possible once the ‘GIS community’ tries to perceive the types of motivation they can provide for a community to recognise ‘Community GIS’. This ssential question is fundamental in many success and failure stories of endeavors to propagate Community GIS. A holistic approach of community engagement with technology, one that seeks to identify the community’s interests and issues first, and then determines how and whether at all, technology can support those interests is a pragmatic approach. One has to understand that the introduction of GIS needs to be conceptualised with a clear aim – is it the benefit that we are seeking, or are we aiming at its day-to-day usage? Benefit of a technology can also seep in without necessarily spending efforts to make it a household product. Hence the comprehension of Community GIS in its ‘usability’ and its ‘effectuality’ are different.

Raising implications
At the intersection between community building and community technology lies tremendous synergy. Each of these domains seeks to empower individuals and families, and improve their overall environment. Surprisingly, approaches that combine these areas are less researched upon. In response to the digital divide, the challenge in most low-income communities has been to identify strategies for engaging residents with technology, providing economical access to it, and encouraging its meaningful use. These efforts have largely and justifiably focused on establishing infrastructure and providing training. As computers and the Internet continue to penetrate these communities, it begs the question of what can actually be done to truly leverage a given technological base, what can it address in under-developed communities, how does it sustain itself as a priority, once the propulsion is taken off?
It is suggested that ‘Community GIS’ might be more comprehendible if it sticks to the basis of its definition i.e., limiting itself to an exercise that aims at benefiting the community and involving them in the process. It should not divert into attempts of installing the use of GIS by them. The involvement part of the community needs to be more researched upon, and depending on the type of community being addressed, one has to understand the level of technology to be percolated to the grassroots. The usage and analysis of GIS for judgemental purposes like environmental parameters, developmental and infrastructural issues can be conceptualised at different strategic levels. At the same time a computer literate and advanced community with different set of needs, can become highly involved in GIS knowledge acceptance, but one has to understand the profile of the community before introducing the techniques. Hence with respect to majority of communities of the developing world, one has to understand that ‘Community GIS’ has to lay stress on local indigenous practises and knowledge for its success. Experimentation to gauge the level of acceptance and effectiveness has to be carried out. Thorough deliberation on the following two facets, which touch upon monitoring, evaluation and sustainability, can streamline the focus before carrying GIS gadgets to underfed communities:

It also needs to be emphasized that, based on existing research in organisational sociology and social movements, several possible consequences of the implementation of GIS are possible. One needs to perceive GIS in terms of: (1) A shift in mission, as use of participatory mapping encourages grassroots groups to become more instrumentalist in their thinking; (2) Preventing the split developing within the movement between more technocratic groups, who have become expert in and committed to market the new technology and others who resist its application and relevance (which in extreme cases can disrupt the effectiveness of the entire organisation, or its legitimacy for its constituency), and; (3) ensuring that there is no marginalisation of local knowledge and community perspectives that cannot easily be integrated into the technology. 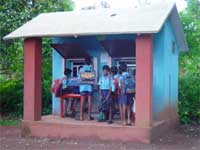 “The potentiality of perfection outweighs actual contradictions… The tendency in modern civilisation is to make the world uniform… Let the mind be universal. The individual should not be sacrificed”, so said Rabindranath Tagore, one of the greatest Indian thinkers in modern times.