The Gujarat earthquake of January 26, 2001 generated intense shaking which was felt in 70% region of India. The intense shaking brought out changes in the ocean and land surface and subsurface. At numerous places, emergence of water on the earth’s surface brought hope among people about the future availability of drinking water in Gujarat. The preliminary laboratory analysis of water samples collected in the epicentral area show high chloride concentration and salt content which ruled out any hope of the potable water. Figure 1 shows the view of the earth surface near Rapar which shows crater like structure which is common in volcanic area. The craters are seen on the surface from where the water has come out as a fountain upto about five feet high which was seen by local people and the water flow continued for about two hours. Near to these craters, long cracks upto about 50 cm wide running about 500 meter long with orientation East-West and Northeast and Southwest were seen. Nearer these craters, pebbles (crystals of silica) also emerged in water fountain due to pressure. Such observations conclude that this earthquake was associated with significant component of vertical force. Fig. 1: View of the Earth surface near Rapar after Gujarat earthquake.

IRS P4 OCEANSAT Data
The IRS P4 Oceansat is the first in the series of operational ocean remote sensing satellites which was launched on May 26, 1999. The OCM sensor records in 8 bands at visible and near-infrared wavelengths. The field of view of the optics is 430, providing a swath of 1420 km from 720 km altitude. The digital data for two dates, one prior (January 18, 2001) and after (January 26, 2001 soon after) earthquake were analysed and chlorophyll concentration and suspended solid were deduced. The comparison of pre (Figures 2a and 3a) and post (Figures 2b and 3b) images shows drastic changes in chlorophyll concentrations and suspended solids in adjoining Arabian ocean especially in creek region of Gujarat and also along the Western coast. 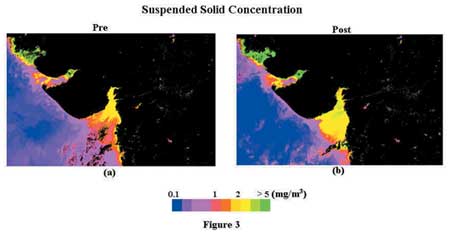 IRS 1 D LISS-III Data
IRS 1D LISS-III pre and post data were purchased from National Remote Sensing Agency, Hyderabad. Surface features were extracted from these images and tectonic lineaments were extracted. The post earthquake image of January 29 shows significant surface manifestations in the epicentral area. The comparison of Figures 4 a and 4b reveal that the moisture level has increased significantly due to which the paleo channel is clearly observed from the post image (Figure 4b). The surface, manifestations were also observed at the same places in the field.

The detailed analysis of multi sensors and multidate data are underway. The combination of low and high resolution remote sensing data is likely to throw information related to the changes in ocean and land parameters. The integration of these information through GIS is likely to give some clues about the possible cause of this deadly earthquake and will also be useful in understanding this unique earthquake. The routine measurements of IRS P4 OCM data is needed which may give some indication of the building of the stresses inside the Earth due to upwelling of the ocean. Such routine analysis is only possible if such data are provided to the potential users freely.

Acknowledgements
Authors are grateful to the Indian Space Research Organisation for providing Oceansat OCM and MSMR data through Oceansat Announcement of Opportunity and to the Department of Science and Technology, Government of India, New Delhi for the financial support to carry out post earthquake study.n