Abstract
Achieving and maintaining the ecological balance through eco-restoration, eco-development and eco-preservation is the prime objective with special emphasis on promoting the people living in the hill areas. The planning aims at the sustainable development of natural resources at cadastral level for maintaining the balance between the productivity function and conservation practices through monitoring and identification of problem areas and calls for alternate appropriate and energy efficient methods and practices.

For watershed management at microlevel, maps on 1:5000 scale or larger are needed including contours of 5-m interval. Such maps are not available now and presently maps are locally prepared for the construction site for project management.

The orthophotos and IRS I C Liss III + PAN merged Special satellite data were used for the generation of Thematic maps such as Landuse/landcover, Soil, Drainage etc. Slope map was derived from 5-m interval contour using Arcview 3D anslyst. Action plan for resources management on a sustinable basis was derived using GIS. Cadastral map showing parcel boundaries on 1: 7920 obtained from Survey and land Records department was brought into 1: 5000 scale and superimposed on thematic maps and action plan maps. And also other socioeconomic data pertaining to the watershed were collected and cadastral level Resources Information Database was generated. Cadastral level Database is customised in the GIS environment, which is interactive, and userfriendly. Monitoring and further updation will be easier for the field officers.

Thus Remote Sensing, GIS and GPS have been found to be very effective and economical tool for Resources management on sustainable basis.

Introduction
The Nilgiris is one of the important hilly areas in the South India and lying in the junction of eastern and western ghats of India. Nilgiris is one of the smallest district in Tamilnadu, with the geographical area of 2544 km2. Nature manifestes itself in the form of Forests, Grass lands and Tea estates overhere.

Nilgiris is a hilly district located on the fragile environment of Western Ghats with an elevation renging from 300 m in the Mayor Gorge to 2634 m above MSL at Doddabetta peak. 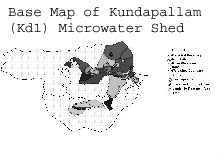 Major part of the Nilgiris ie.56% is under forest cover and about 20% of the district is under plantation crops such as Tea, Coffee, Arecanut etc.Out of which Tea plantation domonates and is found at all slopes. Net area under agriculture including plantation crop is around 29% Paddy, Potato, Cabbage, Carrot and other vegetables are the important crops grown in this district. Grasslands and sholas are seen throughout the district.Extensive wattle ,euccalyptus,pine and other forest palntation are also seen.

Varying altitudes, high rain fall, varying temprature regimes have endowed the Nilgiris with a diverse natural heritage. It has a unique ecosystem with different types of vegetation and great diversity of plant communities. Improper landuse practices is leading to the degradation of fragile ecosystem.

Climate and Rainfall
Nilgiris district of Tmilnadu experiences a diverse climatic conditions due to large variations in altitude varying from 300-2634 m above MSL. The microclimatic conditions also vary due to variation in 1) degree of slope (2) aspect (3) vegetation conditions and soil conditions. The region is influenced by both SouthWest and NorthEast monsoons. The annual rainfall is nearly 1300-2000 m.m

The mean monthly temprature generally varies with the altitude. The maximum temprature in the summer season is 24.3° C and the minimum temprature observed in the winter season 6.0° C. The humidity is about 89% and it is generally higher in the months of July,October and November.

Geology
Nilgiris district is located in the plateau region. Structurally, the Nilgiris plateau belongs to continental block of peninsular India and the mountain ranges comprises of archean metamorphic rocks like Charnochite,Biotite gneiss,Magnetic quartzite, Hornblend granite along with some intrusive bodies like pegmatite,dolerite and quratz veins. 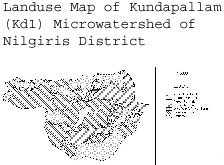 Data source and methodology
Aerial photographs on 1:8000 scale taken during 1996 IRS IC LISS III, PAN data, the coresponding SOI topographical maps of the area and other collateral data have been used in this study.

The methodology used consists of the following types

Slope map
Slope map was prepared using ArcView 3D Analyst from 5 m intervel contours derived by photogrammetric techniques. Originaly nine groups were identified and the same were regrouped as given below.

Soil Map
The soil map also has been prepared using the Orthophotos and updated using IRS1-C LISS III satellite data based on the tone, texture and pattern.

Cadastral map
Cadastral maps on 1:7920 scale showing individual parcel boundary are available with Survey and Land records department. They are collected and converted to 1:5000 scale and digitized using PC based Arc/Info GIS. Further all the attribute datas such as owners name, survey number,soil quality etc had also been stored into the system.

Data Integration
All the above thematic maps were digitized using PC based Arc/Info GIS software. The thematic maps pertaining to the watersheds were registered and labelled and after assigning suitable rank and weightage, overlay analysis were carriedout and the action plans for land resources were generated. Cadstral maps showing the parcel boundaries were superimposed on the thematic maps.

Action plan
The spatial data for the watershed were intergrated based on the decision rules incorporating the landuse, soil and slope. Due to the hilly terrain, slope play a major role for all activities. Based on the different slope classes, the land suitablity are classified as follows:

Decision rules for each landuse category with respect to the corresponding slope class, rank and weightages were assigned. After assigning suitable ranks and weightage, overlay analysis was carriedout using Arc/Info GIS software for action plan generation. The analysis clearly brought out the following.

Conclusion
The study has shown that fragile eco-system of the Nilgiris district is under threat due to improper land use practices, human activities, land slides and enevironment of forest. The analysis has brought out the areas whose landuse practices are in tune with the slope and thus need not be altered, area to be altered and area to be preserved.

The cadastral database created in user friendly and interactive. The Remote Sensing , GIS and GPS have been found to be very effective and economical tool for resources management.

Acknowledgement The authors wish to acknowledge the help and encouragement of the Vice Chancellor, Anna University and the project Director, Hill Area Development Programme, Ooty for sponsoring the project.