Homeland security needs to keep pace with the increasing technological prowess of sources of threats. Th e adoption of Command, Control, Communications, Computing and Intelligence, Security, Reconnaissance (C4ISR), which makes extensive use of geospatial technologies, provides security forces the wherewithal to do so.

With the increasing frequency and diverse nature of threats to the State, what previously used to take place as uncoordinated activities by diff erent branches and chapters of law-enforcement agencies, is now consolidated under an architecture that allows disparate agencies and their chapters to gather specifi c and useful information, and share the same across a network of interested parties. Th is architecture, loosely termed homeland security is, today, seen as vital to the continued survival of the State. Homeland security needs to leverage the technological advances and practices of the day, to keep pace with the increasing technological prowess of sources of threats. Th e adoption of C4ISR (Command, Control, Communications, Computing, and Intelligence, Security, Reconnaissance) concept, from military practice, provides homeland security the wherewithal to do so.

C4ISR can be thought of as a framework for organising multi-media information emanating from a situation (typically a crisis), in a manner that enables non-local users to analyse such information (from multiple sources); act on that information or advise local players on actions to be taken; receive feedback from local players on actions taken; based on which a follow-up set of actions or advice can be initiated, to resolve the situation to the advantage of the users. C4ISR systems make extensive use of technology: especially geospatial technologies.

Operational Components
Before going into further details of the technologies used in C4ISR solutions, it would be useful to gain a perspective on the operational components of a C4ISR solution, as applied to border/coastal surveillance (B/CSS) and critical infrastructure protection (CIP).

As can be seen from the above functional fl ow (Figure 1), there are four components of a C4ISR solution: Sensors
Sensors are the eyes, ears, and skin of a surveillance network, and the eff ectiveness of the surveillance set-up in a particular environment is critically dependent on the type and specifi cations of the sensors employed in the network.

How many times have we heard of a jewelry store heist where the surveillance footage was of little use because the resolution of the installed surveillance cameras was too low; because the lens used was not right; because the entrancefacing camera did not feature a WDR (Wide Dynamic Range) sensor or support BLC (back-light compensation). Given a plethora of options, users typically apply the following thumb-rules when choosing among sensor technologies for specifi c situations:

Choosing a sensor technology will be a function of parameters such as cost (or budget), the potential entitiesunder- surveillance, surveillance range, the terrain of the areaunder- surveillance, and the features to be captured (of the entities-under-surveillance). Fig. 3 shows a range of sensors used in a typical CIP implementation.

GPS
Th e second important geospatial component of a C4ISR solution is the device that allows user resources to be tracked in real-time, in terms of location and movement. All C4ISR solutions include a Blue Force Tracking (BFT) module.

Blue Force Tracking (BFT) is a United States military term used to denote a GPS-enabled system that provides military commanders and forces with location information about friendly (and despite its name, also about hostile) military forces. In military symbology, the colour blue is typically used to designate friendly forces while red is used for enemies, and green or yellow are used for neutral forces.

A BFT system, at its simplest, consists of a GPS device and a means for relaying the GPS information to a monitoring centre: a police patrol unit may have a VHF radio set with the GPS device integrated in the microphone, so that location information is transmitted to the monitoring centre at the touch of a button. More sophisticated BFT systems will allow relaying of mobile sensor data, providing additional information specifi c to the location, etc.; along with the transmission of the coordinates.

Depending on the terrain being traversed, the GPS device will need to support a level of sensitivity that will allow it to function at all times.

GIS
Th e cartographic module is an important component of a C4ISR solution. A detailed digital representation of the areaunder- surveillance will allow the user to integrate the data from the sensors and the GPS receivers on to map, and allow the user to associate real-time sensor feed with a location or feature on the map, as well as track its resources visually. Th e cartographic module typically imports maps from a thirdparty and then allows situation-specifi c interpretation to be imported or added to the maps. Multiple maps can be imported and used, provided they conform to widely used formats. 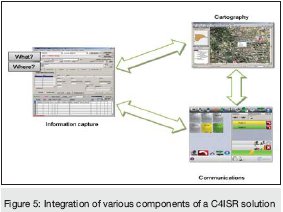 Command & Control Application
Th e command and control component integrates the feed from the sensors and GPS receivers with the cartographic representation of the area-under-surveillance, and allows the user to initiate SOPs in the event of an incident, query and receive additional information from sensors and resources in the fi eld in real-time, and send out instructions to the resources on how to respond to an incident.

All this happens in a coordinated manner – even if there are multiple decision-makers participating from diff erent locations – and with all available information at the fi ngertips of the decision-makers (common operational picture or COP). Th e command and control application sometimes also provides, through additional hardware, the capability to patch multiple communications protocols; thereby allowing diff erent fi eld units (some on V/U/ HF, others on GSM or CDMA etc.) to communicate transparently with each other. Such a communications matrix is extremely eff ective in maintaining command and control during crisis situations.

Finally, given that duplication of information is bound to happen during an incident, the application automatically recognises the reports of an incident that are similar, and allows a user to de-duplicate such information. Desiderata of a C4ISR homeland security solution
Choosing a Homeland Security solution – B/CSS or CIP – based on a C4ISR framework should be a decision taken on the basis of support for the following functionality:

Interoperability
By interacting with legacy systems of involved agencies and with deployed mobile units as well, it is possible to develop a higher resolution picture of a crisis situation. For this purpose, a data model such as the standard JC3IEDM should be used, and web services should be XML-based.

Sharing Mechanism
Sensor data should be managed by publication/ subscription mechanisms: the operator subscribes to the information or services off ered by the solution, which incorporates a middleware layer in charge of searching for the information and publishing it to subscribers. Th is allows information to be received and consolidated in a database in real time.

Architecture
A decentralised and service-oriented-architecture (SOA) allows the system to be managed from any fi xed or mobile network device, providing an added robustness, in the event of failure or crisis situation.

Low-bandwidth protocol:
Data synchronisation mechanisms used should allow information to be shared in real-time, at rates as low as less than 10 kbps, for the solution to function eff ectively in crisis situation. Case Study
Th is case study is of a C4ISR B/CSS implementation in Spain, covering Spain’s maritime border with North Africa (specifi cally Morocco). Th e problem Spanish authorities had was that this stretch of the maritime border was being used for illegal immigration and drug smuggling, and that the number of incidents were increasing at an alarming rate.

As can be seen in Fig. 6, the implemented system manages all phases involved in border management. Th e graph on the right plots the progress of the entity-under-surveillance towards the Spanish shore, with distance from the shore being plotted on the Y-axis, and elapsed time since detection being plotted on the X-axis.

Th e table on the right provides the phase-wise fi gures for three scenarios – detection at 20 to 16 kilometres, 15 to 11 kilometres, and 10 to 8 kilometres. Th e eff ect of the C4ISR B/CSS implementation, in this case, has been a staggering fall in the number of incidents featuring illegal crossing and drug-running across the maritime border covered by the solution.

Conclusion
Geospatial technologies can be used to deliver a far stronger implementation of homeland security solutions. In this connection, it is important to leverage the latest in the respective technologies (remote sensing, GPS, GIS) so that as detailed a COP (common operational picture) as possible is provided to decision-makers. In addition, these implementations, across various law-enforcement agencies, should support a level of interoperability that will allow them to share relevant information in real-time.

Homeland security is too critical a responsibility to be left to be addressed through silo-type responses. C4ISR solutions, leveraging the latest in geospatial technologies, promise and deliver signifi cant improvements in the manner the State responds to threats to its existence.

All illustrations in this article are the property of Amper Sistemas and /or Mistral Solutions Pvt. Ltd. They cannot be copied and reproduced without the permission of the concerned parties