What was the motivation for creating Bye Aerospace?
We started Bye Aerospace with a mission to integrate clean, efficient energy solutions with innovative aircraft designs, with the end-goal of transforming aviation. The global community is pushing and promoting green technology and renewable energy amid fears of environmental collapse due to man’s CO2 contribution to the atmosphere. The green phenomenon has brought about a rise in the popularity of electric and hybrid solutions most commonly associated with automobiles that are more expensive than their combustion engine counterparts. Buyers of electric or hybrid cars pay a premium in the form of cost and sometimes performance in exchange for some long term breakeven point and the opportunity to feel good about lowering one’s carbon footprint. In other words, electric and hybrid is usually associated with a larger price tag and a less than clear value proposition.

The core of our company, including myself, is made up of industry veterans from military and civil aviation. We recognise that innovation in general aviation has languished when compared to other industries. There are some very practical reasons for this, but some of those reasons are beginning to fall by the wayside. The benefits of new technology and industry pressure are aligning to create a great environment for innovation. With regard to electric and hybrid electric propulsion systems, recent political, economic and industrial factors have combined in a manner that threatens aviation gasoline’s (avgas) long term viability. At the same time, some new technologies are proving to deliver a better result at equal or lower initial cost, not to mention lower operational costs. Innovation is sometimes inspired by incremental operational or cost benefits. It can also come as a result of significant external threats. It appears to us that both factors are in play and that is a great environment for us to develop and bring some of these alternative energy solutions to the market. 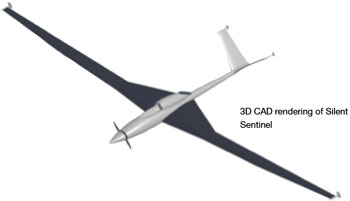 Can you provide examples of how electric and hybrid propulsion are being applied to unmanned aircraft systems?
Our current and available product is Silent Eagle, which is a small unmanned aircraft system (SUAS), also called a mini electric remote piloted vehicle (Mini E-RPV) designed for land-based and maritime operations. Because of its extraordinary endurance, the Silent Eagle surpasses the ‘mini’ category into the ‘close range’ 10-30 km, 3,000 m altitude UAS class and empowers the operator with exceptional economics, and an operational flexibility never before available in the ‘mini’ RPV class.

The Silent Eagle is rugged, reliable, man portable, and requires no auxiliary equipment for launch or recovery operations. The system is quiet with low thermal signature to avoid detection, providing persistent intelligence, surveillance, reconnaissance and targeting data (ISRT). The Silent Eagle carries both an electro-optical (EO) and infrared (IR) sensor on a lightweight mechanically and digitally stabilised gimbaled payload, allowing the operator to keep “eyes on target.” With 10 km communications range and daylight flight endurance estimated at 6 hours, the Silent Eagle provides multi-fold value and capability of competitive systems.

We are also in the conceptual design phase for a future programme called Silent Sentinel, which is the first of its kind Hybrid-RPV. Silent Sentinel is similar in size to a U2 and utilises stored electric power, thin film solar photovoltaic (PV) and other technologies to enhance its endurance, quiet operations and low emissions.

An efficient turbofan engine will provide Silent Sentinel, with remarkable climb rates to high altitude which will facilitate quick access to areas requiring surveillance. Once on station, it will employ a combination of very low sink rate, an efficient electric motor and other design features proprietary to Bye Aerospace to remain on station for extended periods of time. I am excited about the multitude of missions that Silent Sentinel will be able to perform. Can you provide us with some practical examples of how Silent Eagle delivers new benefits to personnel on the ground?
Let us use a hypothetical example in India. As one already knows, one of the biggest challenges India faces is the threat posed by Maoist or Naxalite insurgents. To my understanding, tens of thousands of police and special forces have been deployed to fight this menace. Silent Eagle is designed to support operations where small units can autonomously engage in reconnaissance and targeting activities for days or longer. Since Silent Eagle is powered by an electric propulsion system and the wings include a thin film solar array, the system can stay airborne for up to six hours during daylight missions, and batteries can be recharged on the ground using a collapsible and highly portable photo voltaic system that incorporates the same solar technology as Silent Eagle’s wing. This primarily means three things. First, an agency needs fewer people and fewer systems to cover the same area of terrain. This saves lives and money. Second, it is highly unlikely that a unit will require resupply due to the UAS. If I were engaged in a field surveillance operation, I can imagine that one of the last things I would want is to have the enemy locate my position due to a resupply requirement caused by my UAS. In addition, resupply means putting additional personnel in harm’s way. Third, the electric motor adds the advantage of a low heat and acoustic signature and the ability to operate at broader ranges of altitude. The low acoustic signature minimises the chance of tipping off the enemy to how they’re being watched. The advantage of operating at any altitude means that Silent Eagle will deliver the same high level of performance at sea-level as it will along the mountainous border region in the north.

On a general note, I would add that Silent Eagle is easy to use and the advanced composite construction means the airframe is extremely durable and not prone to damage during recovery. Silent Eagle is poised to exceed our expectations for military and security applications and is proving to be a great force multiplier that overcomes some major operational obstacles created by earlier systems.

You mentioned that Silent Eagle is equipped with electro-optical (EO) and infrared (IR) sensors. Do you offer optional or additional payloads?
Not at this time. The most notable application for this class of UAS appears to be surveillance and reconnaissance so the version of Silent Eagle discussed earlier is packaged to meet that mission. The gross weight of Silent Eagle (with payload) is around 20 lbs. Depending on the wing span which can range from 7 to 9 feet, the payload weight can range from 5 to 7 lbs. With the micro sensor technology 7ft. wingspan version of Silent Eagle as presented in front of autoclave at manufacturing facility in Colorado available in the market today, this allows a customer to be very creative with how they use the platform. This and other requirements have led us to create a subsidiary company called Bye Engineering. The focus of Bye Engineer is to give us the capability to rapidly respond to specific customer requirements without sacrificing the integrity or quality of the platform. We know from experience that some customers may just want the platform delivered to their specifications so that issues such as mission specific payloads can be dealt with locally and in the confines of a customer’s security protocol. Bye Engineering gives us the ability to respond to this requirement as it emerges.