For more than a century, humanity has started showing concern for the future of our planet. Natural resources like water reservoirs, forests, oil and gas fields have drawn attention of governments all over the world due to their limited capacity on the one hand and their rapid consumption on the other hand. This situation is a matter of great concern for countries like Pakistan which depend more on natural resources than on industry for its economy.

To access, manage and monitor these resources, one requires spatial data. A special characteristic of spatial data is that it can be shared and used for many purposes other than the one for which it was originally produced (Asmat, 2008). But dilemma is, usually such data is not shared with other organisations or potential users in countries like Pakistan due to institutional, legal and organisational constraints. The importance of spatial data was not realised for decades by the governments until last few years in countries like Pakistan. This is because of the relatively underestimated socio-economic value of geographic information (GI). Consequently, the establishing of appropriate policy, institutional and legal arrangements to deal with sharing of GI was not given priority at higher levels.

But now Pakistan has started listening to spatial data needs. Some of the driving forces include economic, social and technological benefits from investments already made in spatialresources (such as data collection, processing, hardware, software and capacity building etc). It includes driving forces such as changes in societal priorities (such as reliable, quick, round the clock availability, updated, diverse and user demanded data), natural resource management and community protection (emergency management and homeland security). The launch of egovernment programme in 2003, which included GIS for Agriculture, Natural Resources & Urban Property of Pakistan, Mapping & Database of National Cartographic data is the first example. Second example is the establishment of National Disaster Management Authority (NDMA) in 2006 that requires various kinds of spatial data for rescue operations. Another example includes establishment of Land Records Management Information System as an e-government initiative. These important yet isolated activities of the Government of Pakistan (GOP) need integration to harmonise data sharing so that duplication of efforts in collection, maintenance and processing of spatial data can be minimised with the implementation of spatial data infrastructure (SDI) as seen by Crompvoets (2006). This paper takes a closer look at SDI readiness in Pakistan in the context of e-government, socio-technical and geopolitical situation of the country.

In September 2007, a field study was conducted to collect information about "SDI-supporting initiatives" Masser (2005, p.258) in Pakistan. The study was carried out in three major cities i.e. Islamabad, Rawalpindi and Lahore. The information was collected through questionnaires, interviews, policy documents and site visits. In total, seven organisations were visited as displayed in Table 1.

MAJOR FINDINGS OF THE FIELD STUDY

Data Types Produced
The first step in the development of a Spatial Data Infrastructure (SDI) is the documentation of existing data. The study reveals that both sectors, public and private, are producing spatial data such as topographic, cadastre, soil, geology, hydrology, ortho imagery and crops as shown in Figure 1. 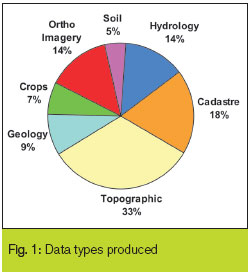 PRIVATE SECTOR'S CAPACITY FOR DEVELOPMENT
SDIs are usually victims of public sector. Therefore, private sector is given significant consideration especially its capacity to develop innovative and new services. A GIS portal offers metadata to extract data from databases which need not only database development capability but also expertise to develop data extraction tools. 44% organisations responded to metadata creation capability, 56% responded to develop databases while 44% organisations responded to the development of data extraction tools. A GIS portal by National Disaster Management Authority Pakistan (NDMA, has been developed. The portal was developed and is maintained by a consortium of experts drawn from the World Bank, American and Pakistani universities and the private sector, with support from the government of Pakistan according to the website of GSDI (https://lists.gsdi.org/ pipermail/sdi-asiapacific/2005- November/000075.html). STAKEHOLDERS SUPPORT
Contrary to GIS, SDI has many stakeholders such as academia and research institutes, NGOs, public and private sectors. All these stakeholders were considered and contacted during the study. Replying to the question, "what is the potential of SDI development in Pakistan?" NGOs graded potential of SDI development in Pakistan 100% as "Good" followed by 80% from public sector and 71% from private sector. This reflects the positive attitude of key stakeholder groups of SDI in Pakistan. One-to-one contact plays a significant role in information exchange. Therefore, GI stakeholders from private and public sector organisations were interviewed to know their opinion towards SDI development. As capacity building is an important part of SDI development therefore, in this context employees of academia engaged in GI related teaching were also interviewed. A total of five structured and semi structured interviews were recorded.

Some of the points raised during the interviews are as below:

PUBLIC SECTOR ORGANISATIONS
Three public sector organisations operating in geospatial domain were visited i.e. Survey of Pakistan (SOP) at Rawalpindi, Soil Survey of Pakistan (SSP) and Geological Survey of Pakistan (GSP) both at Lahore. All these organisations are on the supply side producing and providing spatial data within their mandated role. Being funded by the government, no user oriented products are being considered. SOP is rich in human and technical resources and is presently a member of the most renowned international mapping project 'Global Mapping' a UN project funded and supervised by International Steering Committee for Global mapping (ISCGM). Global Map published data of Pakistan on its website (https://www.iscgm.org).

PRIVATE SECTOR ORGANISATIONS
Two GI private sector organisations were visited. National Engineering Services Pakistan Pvt. Limited (NESPAK) located in Islamabad and MYCO Surveys Pvt. Limited in Lahore. NESPAK is a consultancy organisation and provides services in the fields of GIS and IT in addition to other infrastructure development project services. One of the GIS expert of the organisation during interview criticised Survey of Pakistan for not giving access to data which is no doubt a common complaint by most of the users. MYCO provides services for topographic and engineering surveys and also takes part in capacity building programmes.

ACADEMIA, RESEARCH INSTITUTES AND NGOS
To explore the role being played by academia, research institutes and nongovernmental organisations (NGOs), one organisation from each domain was directly observed through personal visits. Among academia and research institutes, Institute of Geographical Information Systems (IGIS) located in Islamabad was visited. The institute offers a number of programmes from basic short courses to degree level such as MS and PhD in GIS and remote sensing. The institute organises seminars, workshops and symposia regularly to create awareness about spatial sciences and technologies among people of the country. One of the winners of GSDI 2007 Small Grants (https://www. gsdi.org/proj+progr.asp),World Wildlife Fund-Pakistan (WWF-P) is a non governmental organisation. WWF-P is one component of the WWF international family and is playing its role for conservation of nature in Pakistan. The NGO is establishing a Spatial Data Infrastructure (SDI), previously known as data clearinghouse, for sharing conservation information, data and expertise, (GSDI Small Grant Summaries 2006-2007 Funding Cycle, p.9). During the discussion, it was revealed that a survey was conducted titled "SWOT analysis of partners and stakeholders to assess their GIS/RS capabilities/resources". The analysis shows that there is need of capacity building in GIS & RS in Pakistan. ASSESSING THE CURRENT STATUS
After going through the study results, summary of which has been presented in above paragraphs, Table 3 critically analyses SDI related activities in the country in an integrated fashion. The parameters used are of Eelderink, L., J. W. H. C. Crompvoets, et al. (2007) as well as some additional parameters were also considered that are mentioned in the table such as social component. The decision level i.e. High, Moderate, Low and Nil are based on the following criteria:

CONCLUSION
National policies as well as socio-technical environment in Pakistan aim to promote SDI culture gradually as pressure on natural resources and land is immense due to rapidly increasing population and changing geopolitical situation in the region. But issues such as institutional arrangements and policy framework for the establishment of spatial data infrastructure remains to be addressed though organisations in public and private sectors are ambitious to take off for SDI in the country. In this context, the national mapping organisation (SOP) can play a pivotal role by bringing key stakeholder groups of spatial data on a unified platform for the implementation of an effective spatial data infrastructure (SDI) which is the need of the day.