Gathering geological data and disseminating the data by traditional methods is a slow and expensive process. In order to re-address the deficiency of geological information world wide within a reasonable time frame and cost then more rapid approaches are needed. Geological Surveys in the developing world, especially those in countries where minerals play and important role in the national economy are increasingly searching for cost-effective and rapid techniques to increase the efficiency of their geological data gathering.

Various affordable, operational technologies such as remote sensing, Geographic Information Systems (GIS), GPS and laser range finders can significantly contribute to improved efficiency. Several levels of technological sophistication are envisaged ranging from off-the-shelf satellite imagery to report generating software that will automatically retrieve specific client orientated information from a global database. The main focus of the project has been directed to the use of remote sensing to gain geological and geohazard information.

Funded by the Department of International Development (DFID), London, this British Geological Survey (BGS) project aims to demonstrate that appropriate and affordable technologies such as those mentioned above, together with access to the internet can contribute to data sourcing efficiency in diverse geographic and climatic terrains.

Methodology
The starting point for the project was a manual written by The British Geological Survey, entitled Remote Sensing and image analysis a practical training manual, this contained information on guidance for the use of the technology available. This document was then marked up using eXtensible Markup Language (XML). XML is a document processing standard that allows text documents such as the manuals to be encoded with information to allow the retrieval of information as requested by the user. This is a highly useful and relatively new form of designing text formats, and produces files that are easy to generate and easy for a computer to read.

(XML) allows text to be encoded with 3 broad types of information. They are:

Encoding the text in this way allows the user to generate a report containing the information specific to their requirements. Such a report could be a list of climate zones with the appropriate remote sensing techniques for each climate type or alternatively, it would be possible to retrieve all sections of the text that held information relevant to Radar, for example. 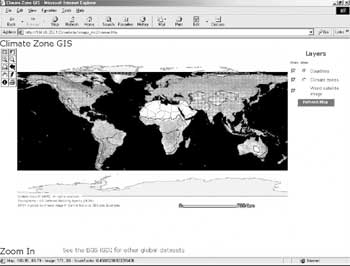 Fig. 1: The ArcIMS front end for the project
The text documents for this project were received in a variety of formats including Word document and RTF files. The software was then used to convert these documents into XML files included WorX-SE, XMLSpy and Omnimark.

The map based front end for the project was developed using ArcIMS which is a web-based Geographic Information System (GIS) produced by the Environmental System Research Institute (ESRI). It allows the dissemination of GIS data and mapping services via the internet and it was decided that this was the best software for our purposes. ArcIMS has a simple browser interface and provides some of the standard tools present in Desktop GIS systems such as Arcview. Using ArcIMS however means that we are able to serve GIS data across the internet. An example of a standard GIS tool that we have used is the hyperlink function that has enabled us to link between the example satellite images and the country’s map so that at the click of a button you are able to view an example image for that country.

It was decided that a graphical means of displaying the data would be the most effective way of serving the data we needed across the internet. ArcIMS is easily customisable to fit our needs for the project, for example we have linked from the map using the country codes to retrieve county specific information to further guide the user. This map based front end is used to guide the user to the geographical area in which they are interested. Fig. 2: Radarsat Image of the Bartica area illustrating the geological texture of part of the Precambrian basement
Cold Fusion is used for developing powerful web applications using an intuitive tag based scripting language. Examples of its use include the provision of database access and business intelligence solutions. For this project ColdFusion is used as the scripting language that links the ArcIMS software and the XML documents and performs file processing and manipulation. It is also used to create instances of the Microsoft MSXML COM object to allow server-side XSLT processing. XSLT and Omnimark have been used to extract relevant information from the XML data.
Case Studies
One of the most important concepts of the project is that the methodology must be appropriate in the context of the country’s skill base, infrastructure, geological setting and climate. Therefore 2 case studies were carried out in the contrasting climatic and geographic areas of Guyana and Mongolia. Guyana, in South America, is dominated by tropical rainforest and is obscured by cloud for most of the year where as Mongolia includes a range of climatic zones from arid to temperate.

Prior to going into the field suitable remote sensing imagery (both satellite and airborne) was purchased and interpreted for use during the fieldwork. In conjunction with the imagery, GPS and laser ranging devices were used with traditional field mapping techniques to update existing maps and gather new information. To enable the continuation of the methodology after the departure of the BGS staff the local geologists and technicians were supplied with hardware and suitable training.

Guyana
Guyana has a mineral base economy and the Geological Survey is keen to adopt low cost mapping and data gathering techniques to improve efficiency.

Guyana is dominated by tropical rainforest and is obscured by cloud for most of the year making it difficult to gain Landsat imagery that is of any use. Radarsat however can effectively image tropical regions and has the benefit of high spatial resolution making it the most appropriate imagery for this region.

It was decided to run a pilot study in the Bartica area of north central Guyana which is low lying and has three main rivers running through it that would provide route ways through the dense rainforest. 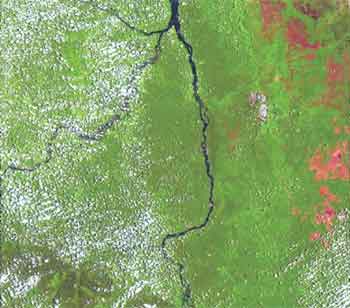 Fig. 3: Landsat TM image of the Bartica area, Guyana, showing uniform forest-covered Precambrian basement surface.
Fine beam Radarsat imagery was purchased via the internet and a Landsat 5 Thematic Mapper image was procured through collaborative work with the National Resources Management Project. On-screen Geological interpretation was carried out prior to fieldwork and then hard copy and digital maps were taken into the field for ground truthing. Whereas dense rainforest and patchy cloud obscured all geological information on the Landsat 5 image, the Radarsat image clearly showed the structural and limited lithological information which allowed a preliminary structural map to be compiled prior to fieldwork. This map could then be used to pin-point areas of interest within the study area. Four project sites were chosen and the data for these areas were processed as band composites, principle components and band ratios. The output was then displayed on 1:50,000 and 1:200,000 scale plots for geological interpretation in the field.

Enhanced imagery such as band ratios is particularly effective in discriminating certain clay and oxide rich lithologies in the arid Gobi desert of Southern Mongolia. Decorrolation Stretches (principle components) however helped to map out major geological units and fault structures in the Baruun Altai of Western Mongolia (Figure 4). GPS was also used to locate field sites in order to geocorrect the raw image data to the local map projection system.

Conclusions
Feedback from the Geological surveys involved in the case studies suggests that data gathering rates have been substantially improved by the use of remotely sensed data and GPS as part of a structured programme of interpretation and fieldwork.

The true development in this project lay in the report generating aspect and we believe that we are producing a web site that will prove invaluable to Geological surveys and other Government mineral institutes worldwide. We feel that this site will help Geological Survey Organisations and individuals to realise the full potential of cost effective sustainable technologies such as Remote sensing, GIS and GPS.

Acknowledgments
This paper is published with the permission of the Director of the British Geological Survey.