The combination of reality capture and digital realisation, the Cloud’s infinite computing capacity, and crowdsourcing technology are all set to shape the construction industry in 2014 and beyond By Dominic Thasarathar

Over the next decade, growth in the global market for construction services across the built, civil and industrial environments is predicted to outpace the rate of world GDP expansion. The findings of a recent study conducted by Global Construction Perspectives and Oxford Economics forecast that by 2025 worldwide construction output will reach $15 trillion, around 70% greater than the current levels. So what impact might digital technology have on the industry by the time 2025 rolls around? Predicting the future of the construction industry can be a tricky business — think of all those red-faced pundits who called time on its “wasteful practices, inefficient business models and lack of productivity”, only to see the industry thunder on and leave them kicked to the curb. The construction industry’s relationship with technology has been no exception. But that notwithstanding, here are the three trends which are likely to have an influence in shaping construction industry over the next decade.

A remarkable example of a major project involving reality capture and designing in context and modelling in reality can be seen in the Denver International Hotel and Transit Center project in the US. The project, which is managed by HNTB in collaboration with Parsons and AECOM, designed by Gensler and under construction by MHS (Mortenson, Hunt, Saunders — a tri-venture with enabling work provided by Kiewit), involves a large-scale hotel and public transit centre in addition to the existing airport. In an extensive review of the project, Informed Infrastructure noted: “Part of the early effort involved capturing the existing conditions, above and below ground for the interface of this new construction project with the existing building. The integration of the point cloud into the model, along with survey data, assured an accurate building location.”

The data capture of the terminal building included LiDAR scanning of the first three bays from the roof down to the ground. The scan assisted modelling the building to a high level of detail with everything modelled down to 6 inches in size. Using LiDAR to model the interior took place over three evenings (1 a.m. to 4 a.m.) with 60-80-foot scans. The scan data was compiled into a digital image, and from there it took four to six weeks to create the full model of the existing building.

Similarly, at the other end of the project process, trends in digital realisation, like 3D printing and digital fabrication are shrinking the number of steps it takes to go from a digital model to a finished real-world asset. Direct machine control from 3D models is disrupting the manufacturing maxim that complexity and uniqueness are expensive. Contractors will likely benefit from drastically reduced in-situ construction costs and the freedom to accommodate the most complex designs that architects can throw at them, without breaking a sweat.

Tuning into the sound of the crowd

Today, sharing your point-of-view on everything from the fortunes of your favourite football team, to the best tropical beach, to spend your hard-earned vacations days lazing on, is simply a matter of opening a Web browser, tweeting or posting to Facebook. This easy access to large crowds offers the industry a couple of interesting possibilities. Firstly, the prospect of accelerating the consultation and permitting processes for construction. Consider the increasingly complex urban environments in which we live and the growing number of stakeholders who need to be consulted and you can begin to see the attraction of sharing your project details via crowdsourcing.

Now consider the skill crisis we hear about in construction — an aging workforce, a lack of apprenticeships during the Great Recession, a perception of this being a sunset industry as a career option. In fact, according to a study released earlier this year by the American Institute of Architects (AIA), 69% of architects, engineers and contractors expect a shortage of skilled workers over the next three years, with 32% anticipating a shortage of specialty trade contractors by 2014. And for the impact specifically to the construction industry, consider this: according to the Talent Pressures and Aging Workforce Industry Report Series conducted by the Sloan Center on Aging and Work at Boston College, of the 58 construction firms surveyed, 50% indicated the aging workforce would “negatively” or “very negatively” affect their businesses — a figure significantly higher than other business sectors studied. With baby boomers in the West rapidly approaching retirement age, the industry faces a significant skills gap as fewer skilled workers are available to take their place.

Now add in the transactional nature of the industry, one which is driven by projects, where the workload of a company, and therefore workforce requirements are often in flux. Digital connectivity supporting the notion of e-working, via work exchange hubs is already taking off in other sectors of the economy. So why not construction? Finally, shift the emphasis from opinion and expertise to money and you open the door for crowdfunding and peer-topeer financing of projects. Technology entrepreneurs have been tapping this route to equity for some time, but now real estate developers are venturing there too. Local funding for local projects by the local community could open the door for ‘socialpreneurs’, localising health care, education and social housing into the hands of the local population, creating a demand for localism from the contracting community in a modern day artisan manner. To support the renovation of the Teatro Lirico, the City of Milan has incorporated laser scans, photographs and reality capture data to create 3D models, so that design projects can start with accurate dimensions and photo-quality context rather than a blank screen

For a fascinating look at projects fuelled by crowdsourcing, one can take a look at a report released in January this year, Crowdfunding Architecture, created by massolution for The American Institute of Architects, gives an examination of Colombia’s 66-story BD Bacatá skyscraper for downtown Bogota, and the ‘I Make Rotterdam’ project in the Netherlands for a bridge to alleviate pedestrian traffic.

3D model of a portion of the City of Bamberg, Germany displayed on an iPad

Courtesy: City of Bamberg and Autodesk

for construction funding and stimulus. Abaffy’s article also cites iamuprising.com, which is dedicated to solving the world’s engineering, architecture and construction industry challenges by offering cash awarded for solutions deemed most viable, feasible and desirable.

The Cloud, Big Data and the death of rework

It’s hard to escape talk of The Cloud these days — the notion of hosting computer programmes and data on giant server farms accessed via the Internet from a Web browser — on your desktop PC, laptop, phone or tablet, in the office, in transit or at the jobsite.

The future of construction is going to be one where multi- dimensional, highly complex challenges are chewed up in near real-time. Getting the right design, with the right schedule, with the right risk management, for the right outcome, perfect project delivery, should become achievable, and should sweep-away today’s issues of rework, inefficiency and waste.

Now consider The Cloud as your shop-front to the world. The Global Construction Perspectives and Oxford Economics study cited that by 2025, 63% of construction output will be in today’s emerging economies, how will you capitalise on this? The Cloud has no boundaries; might you provide services remotely without the overheads of setting up local offices? Consider remote estimating, risk assessment, design optioneering, and more.

The other side to the Cloud is, of course, Big Data. The amount of data being created in the world is increasing at a breath-taking rate. According to a 2012 Digital Universe study, come 2020, there will be 5,200GB of data for every person on earth. Reflecting on the results of a 2012 survey AEC professionals conducted by Aconex, Katie Hall with Aconex noted recently that “Big Data is a big topic these days, and advances in BIM (building information modelling) technology have made it a critical issue in construction technology. The volume of information to be managed throughout the course of projects has cascaded into the terabytes (1 terabyte = 1,000,000,000,000 bytes).”

Searching for patterns in large amounts of data to predict future outcomes, or Predictive Analytics, is an established practice in many businesses, most notably finance for credit risk and retail for consumer behaviour. For the first time in history construction is curating large amounts of high integrity, highly structured data via BIM/3D models. Step back from an individual project and think how that data might be put to work outside the originating project — multi-project buying opportunities, advanced material hedging, smart scheduling, improved cash-flow and more, are all examples where analysing historic data might improve future construction outcomes.

No conversation about the future of the industry can take place without reference to the millennial generation — today’s children and young adults who have grown up immersed in digital technology and digital culture. Today a teenager in Boston has more in common with a teenager in Mumbai than ever before. These dynamics present the industry with a homogeneous, globally aware talent pool, but one whose expectations may vary considerably from previous generations.

A proclivity to cooperation and collaboration when solving problems, to a belief that skills in digital technology are inseparable from career success, and one where the boundaries of work and social are significantly blurred are all expectations that the industry will need to accommodate if it’s to attract the next generation of workers and leaders.

As admitted at the outset, predicting the future of the construction industry is a tricky business, but it seems clear that the potential of crowdsourcing online and via social media, the potent combination of reality capture and digital realisation, and the impact of the Cloud’s infinite computing capacity are the three big, undeniable trends that are reshaping the construction industry. 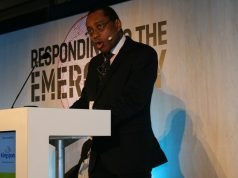 Platform approach for UK schools and hospitals within 10 years