The Survey of India (SoI) went high-tech introducing digital camera integrated ALTM technology last year. Launched as a pilot project of the Department of Science and Technology, the Airborne Laser Terrain Mapping (ALTM) was executed in collaboration with a Delhi-based Aerial survey firm with fully integrated systems and equipment. With that, the SoI became the first government agency to utilise ALTM system in India and the Asia-Pacific region. Induction of ALTM forms an important part of the large scale modernisation of the Survey of India. This is also perceived to enable SoI to play a bigger role in the creation of National Spatial Data Infrastructure (NSDI), India.

The SoI started collecting ALTM data during May ’03 and now is under process. From these data it aims to produce Digital Terrain Model (DTM), Digital Elevation Model (DEM), Orthophoto maps, line maps and fly-throughs. After signing the agreement with the Delhi firm, the Surveyor General of India had said that SoI now has the capability to generate highly accurate maps in quick time, specially needed for pre and post disaster management, corridor surveys for infrastructure development such as national highways, railways and inter-linking of rivers. Flood plain mapping is another crucial area, where this technology can be effectively used. Survey of India now offers its services to all the Agencies, including private, requiring large-scale maps for urban and rural planning, disaster management, infrastructure development, revenue records maintenance. 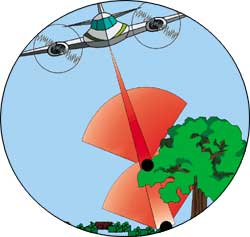 Since 2000, NRSA has also opened up its aerial survey facility for users outside India on a commercial basis. It is also presently equipping with ALTM instrument. Initiation of Natural Resources Census (NR-Census) and Large Scale Mapping (LSM) are two new programmes, among a host of other application areas related to this.