In addition, a ground based GPS unit is required to be operating within 20km to 50 km of the survey area, depending on survey accuracy required. The coordinates of this base must be known. Data from the station is used to compute a differential GPS solution for the aircraft.

The system components are shown diagrammatically below. 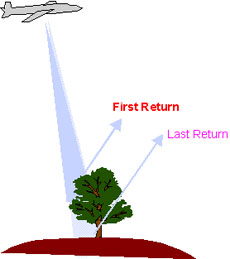 First Return: Measures the distance to the first object encountered … in this case, the tree foliage

Last Return: Measures the distance to the last object … in this case, the ground

By acquiring first and last return data simultaneously, it is possible to measure both the tree-heights and the topography of the ground beneath in a single pass

The return signal strength of each of the first and last returns is also recorded. This information can be used with a grayscale to create geo-referenced images. The image below shows ground and non ground returns.

Airborne Laser Scanning is an active remote sensing technology. The system emits laser signals and as such can be operated at any time during the day or night.

ALS in Forestry
Because of its ability pass between tree branches to record both ground and non ground features, ALS is particularly suited to forestry applications. Applications include the acquisition of data to compute average tree heights, the use of terrain data to plan the location of roads to be used in timber harvesting and the determination of drainage locations for the design of retention corridors. The diagrams below show contours derived from ground data, which clearly indicate drainage locations, together with a profile showing ground and tree canopy.

Flood Plain Definition
Because of the ability of Airborne Laser Scanning to observe large terrain areas accurately and quickly, flood plain mapping is a frequent application.

As an example, an area 30 km by 10 km can be captured, using a fixed wing survey platform, in about four hours. The vertical accuracy of the data would be around 15 cm and the average point spacing would be 1.5 metres. About 153,000,000 data points would be recorded, providing a detailed description of the terrain and objects on it.

Issues of Data Presentation
ALS surveys generate large amounts of data. Because each data point is randomly located, not all points are required in order to define the terrain and objects on or above it. In order to remove those points which are not required thinning techniques have been developed using nearest neighbour algorithms to compare adjacent points and remove any that do not add to the definition of the required object. Depending on the parameter used this can reduce the size of the data set significantly: a 40% reduction in file size is not uncommon.

Other presentation options include the triangulation of the data followed by contour interpolation. Profiles, cross sections, flythrough and hypsometric plots are other options. This latter option is particularly useful where the terrain is generally flat and thus the interpretation of contours is rather difficult. Hypsometric plots assign colours to height ranges. The results greatly increase the ease with which the terrain change can be interpreted. In the example below a height range of 0.50metres has been used.

Project Planning
Issues which need to be considered when planning an ALS project include:

These and other planning issues must be understood and addressed prior to undertaking an ALS survey. Most have a cost implication but to ignore any of them may result in an unsatisfactory survey outcome, with an even higher cost implication!

Absolute accuracy is important where ALS co-ordinated data has to be integrated with existing data. Relative accuracy will often be more significant in more localised survey projects, such as the determination of tree heights.

The relative accuracy of ALS points is generally in the range of 3 cm-5 cm.

The absolute accuracy is less, dependant on the four components above, viz

Taking these components into account, ALS regularly achieves an absolute accuracy of 15 cm in height and 30 cm in position.

Indicative Costings
Costs of an ALS survey depend very much on where the survey is, (the cost to mobilise to the site), the time taken to acquire the data and the extent of data processing required.

An area 10 km by 4 km could be surveyed in one sortie and would cost approximately AUS$40,000.00, including basic processing, to achieve a height accuracy of 0.15m on clear ground. This cost would exclude the cost to mobilise to the site and also costs for a single ground base station, ground test points and any advanced data processing.

By comparison, to map the same area by photogrammetry to the same accuracy would require some 80 frames of photography and 40 ground control points!

Conclusion
Airborne Laser Scanning is a cost effective method of acquiring spatial data. In common with other acquisition methods it has specific positive aspects but also some negative ones! A knowledge of surveying issues is essential if client expectations are to be met consistently. ALS is not a “black box” technology!

The problem to be solved must be properly understood before an appropriate acquisition solution can be designed. Airborne Laser Scanning may be the most appropriate solution when some or all of the following circumstances prevail.

An ALS practitioner can discuss your specific project and determine the most appropriate data acquisition option available.