Introduction
With the development of economic activities in the world, the construction activities have also increased manifold. In order to assess the general suitability of the site and to prepare an adequate and economic safe design for the proposed work, proper sub surface investigation is to be made. The primary objective of subsoil investigation in civil engineering is to determine stratiagraphy and pertinent properties of soil underlying the site. The sub-soil stratum below the ground is always complex. Traditional method of soil investigation includes boring (or) drilling, test pits, plate/ footing load test, sounding/ probing, dynamic soil test, analysis chemical and engineering parameters of soil or rock sample in laboratory and so forth. Later with the introduction of various indirect methods (involving geophysical investigation such as electrical conductivity test, seismic refraction and magnetic methods) and expansive application of remote sensing techniques in the soil mapping, now more synoptic coverage could be obtained. With the introduction of Geographic Information System (GIS) at present, not only the missing spatial data could be generated to cope with existing geographically referenced data and the corresponding attribute information, but modeling and simulation for specific requirement and fore costing can also be carried out.

The use of GIS in geotechnical investigation has been rather recent in comparison to its own applications such as water resources, agriculture, geology, metrology etc., . As for as geotechnical engineering is concerned inclusion of the spatial attributes of the data is itself a significant advance over common practice, where the spatial component of these data is often ignored through the averaging of multiple data values from different location and application of a safety factor to account for variability among other factors. The soil as a whole is a complex material, it is always heterogeneous and non-isotropic because of which profile of soil will be entirely different from place to place.

In order to decide the suitability of foundation for any structures, any location, and any loading, the bearing capacity of soil is to be determined. Safe bearing capacity of soil (SBC) refers to the maximum net intensity of loading, which can be allowed on the soil without the settlement exceeding permissible value (1). SBC of the soil can be determined by sub soil investigation. However, due to expensive subsoil investigation works, the present research was undertaken taking the advantage of the spatial continuity and variability of this important geotechnical parameters to develop a user friendly suitability map for shallow foundation.

In order to develop a comprehensive spatial database the present work was carried out using Arc- info/ Arcview at 1: 12500 scale. The study was carried out for a small region in the south of chennai, India. The work involves development of spatial framework using available maps and GPS survey, followed by digitization, building topology, verification and analysis. The primary data used for the work includes area of state boundary, bore log data, soil survey data, village boundary data where as the derived data includes soil map, Iso penetration resistance map and suitability map.

Study Area
The study area involves Kalikundram, Kottivakkam, Tharamani and Thiruvanmiyur of Chengalpattu district at the south chennai, India. The study area lies between 80° 15′ 00″ E – 80° 16′ 50″ E Longitude and 12° 58′ 30″ N – —Latitude. The extent of the study area is 1058.2 Hectares with more than 5000 inhabitance. The area is semi-urban with majority of the population depending on various commercial and industrial setting in the near by city, chennai. 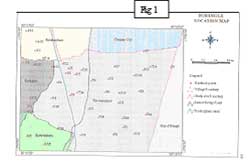 Derived Soil SPT N Map
The integration of Soil and Iso SPT N map gives a very practical and significant outcome of this research work. The strength and soil properties can be easily estimated at any location within the study area with simple queries . Generally shallow foundation will be laid within 1.5 m from the ground level. In order to decide the suitability of shallow foundation Iso SPT N @ 1.5 m from the ground level is overlaid with Soil map.

Suitability Map
The suitability of the shallow foundation is decided by two important governing factors namely allowable bearing capacity also referred as allowable load intensity (ALI ) and super imposed load (load from each floors). Allowable bearing capacity can be computed using Teng’s relation (1). The program for the suitability of the shallow foundation is written in Avenue language. The parameter used for the suitability analysis are SPT N value, width and depth of the foundation, level (terrain) of the ground, ground water table, and soil type. This program will automatically take the values of SPT N from Iso SPT N map with respective depth and the soil type will be fetched from Soil map. For an following input, width of the footing as 2m , depth of the foundation as 1.5 m from ground level (G.L), water table is far off from G.L, G.L is fairly level, Suitability map (Fig 3) is generated. For this input, five zones are demarcated. Zone 5 – highest ALI ( i.e., > 600 KN/sq.m) regime has been observed towards north and middle eastern regions with sporadic northern pockets. This zone is well suited for shallow foundation. The zone 2 to 4 (i.e., 100 – 600 KN/sq.m) are moderately suited for shallow foundation. Proper care has to be taken in zone 2 before designing the foundation. The zone 1 (i.e.,